GameMaker is a seminal game engine, with roots dating back to the late 1990s.  It is a cross platform 2D game engine with tools that run on Windows and Mac machines while capable of targeting both desktop operating systems as well as Ubuntu Linux, Android, iOS, UWP, HTML5, XBox One and PlayStation 4 consoles.  GameMaker is commercial software with a free trial available, we will discuss pricing shortly.

The closer look series is a combination of overview, review, and getting started tutorial aimed at helping you decide if a given engine is the right choice for you.  As always, there is an HD video version available here and embedded below.

GameMaker Studio is an all in one integrated environment for creating games.  It includes everything you need in a single application with a tabbed working environment and a unique virtual desktop style approach supporting multiple editing windows at once.  The all in one all tools at hand nature of GameMaker is probably one of it’s greatest selling points. 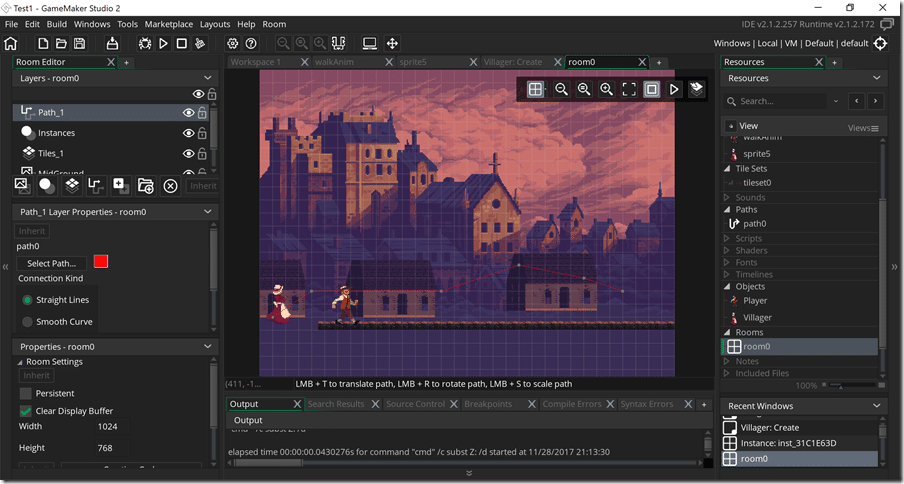 Side and bottom panels can be collapsed down to give more room: 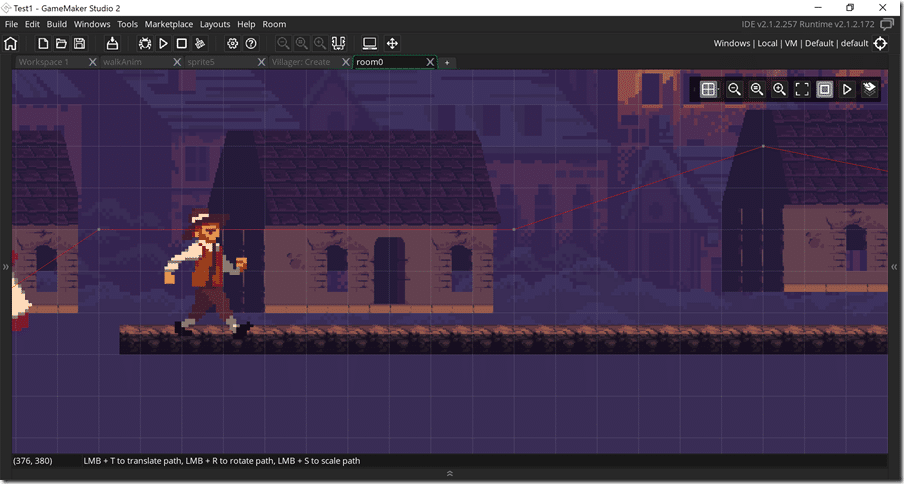 The primary work area is tabbed, supporting multiple open views at once:

As mentioned earlier, GMS has a workspace setup that enables you to work with and pan between multiple editors at once, like a giant virtual desktop.

The resource panel is commonly used across the various editors and contains the various assets that make up your game.  You can also drag and drop assets onto this window to import them for use in your game.  For example, dropping in an image file will create a new Sprite entity for you. 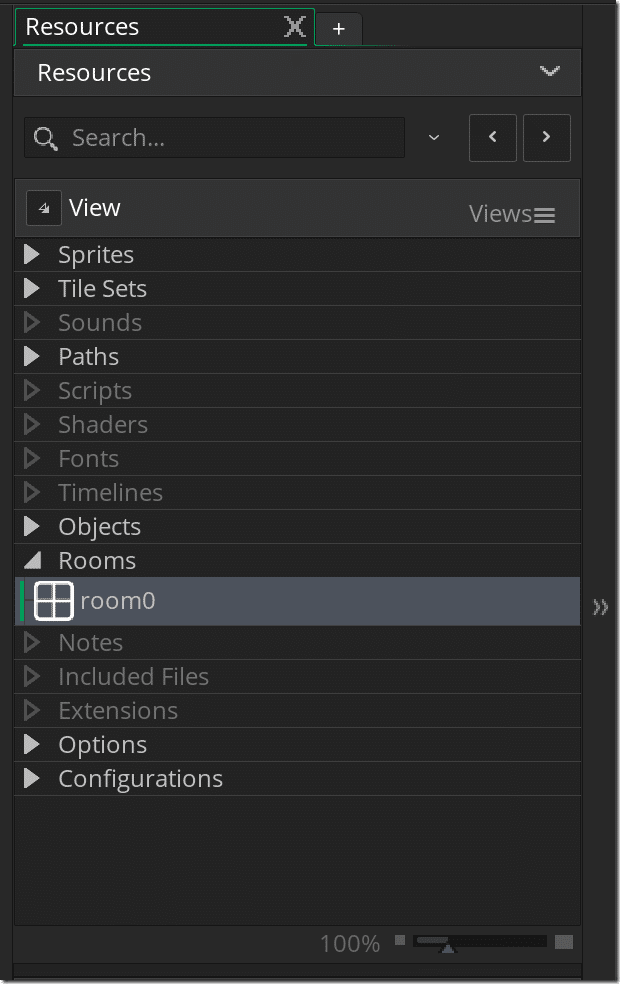 You can also create new entities via the dynamic right click menu.  For example, right clicking the Tile Sets area will bring up this menu: 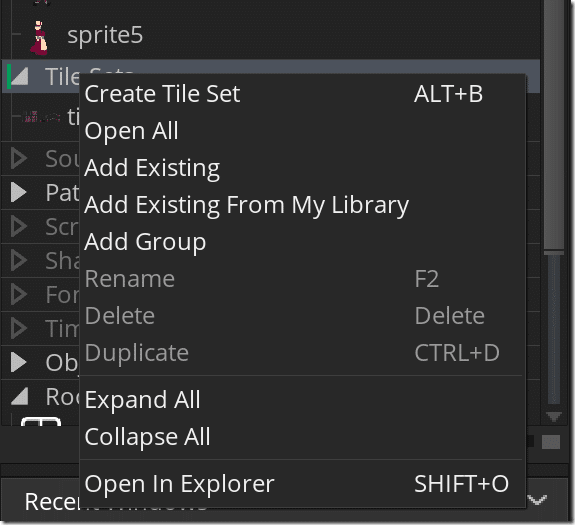 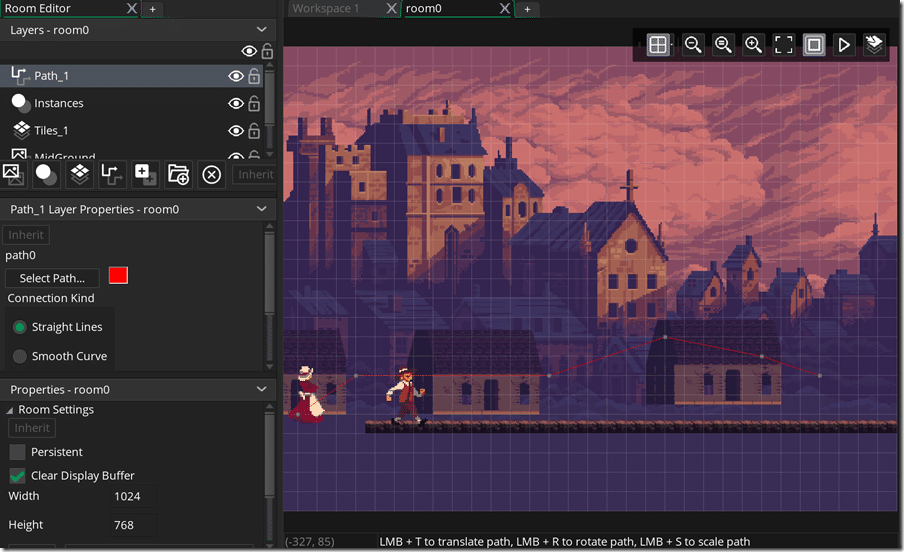 This is your traditional level editor, where you can create various layers of entities that compose your game level.  Top left you have the layers controls, enabling you to create/delete/hide the various layers that make up your game.  Layers can be composed of instances (objects), backgrounds, tilemaps, and paths.  The editors below the layer controls change dynamically based on what kind of layer is selected.

Selecting a tile layer brings up the tile map editing tools, including a palette of tiles you can paint with. 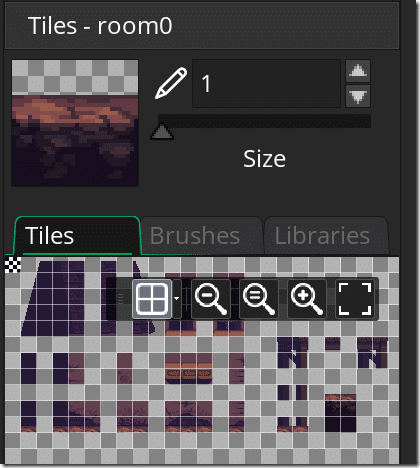 GMS even has support for auto tiling, if your tileset is compatible. 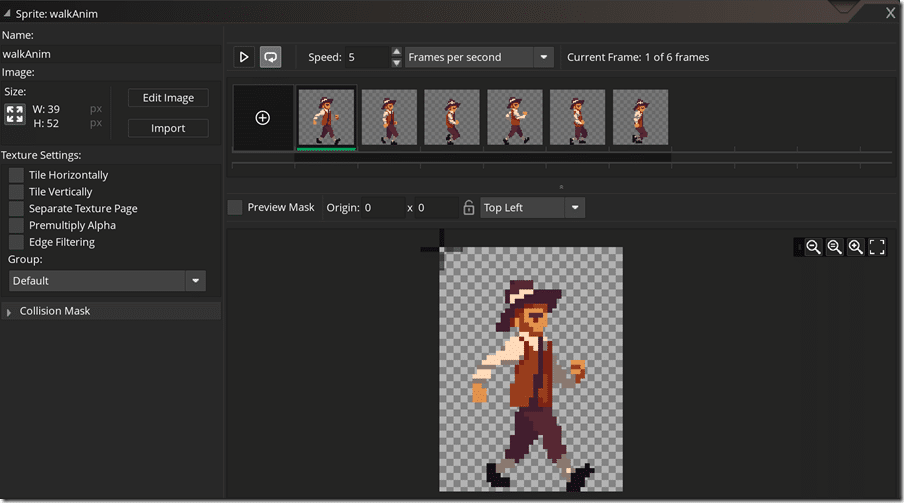 This editor enables you to define how a sprite is imported, the various frames of animation if any as well as a preview of the sprite or animation.  Additionally, clicking Edit Image brings up a full blown image editor within GameMaker. 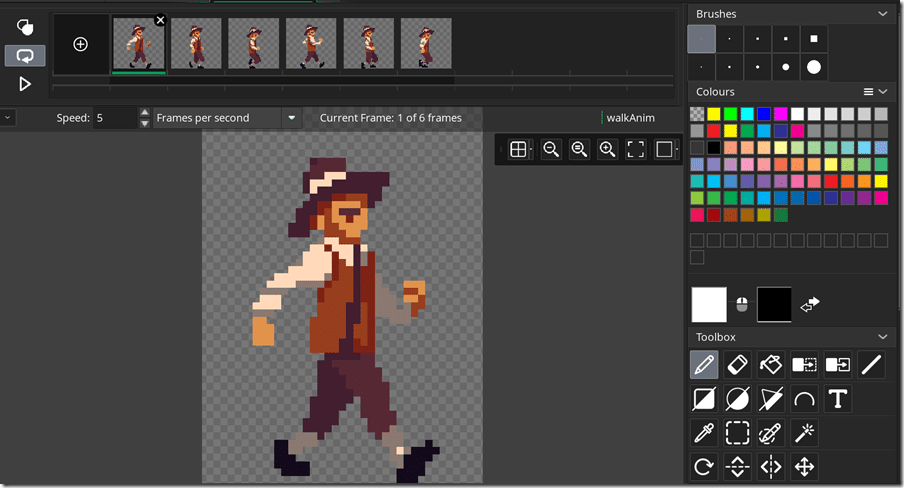 This is a full blown sprite editing package with a variety of brushes available, full layer support, the ability to paint across frames, several tools such as text tools, polygon tools, a magic wand selection tool, mirroring tools and more.  Pretty much all the functionality you would expect for creating or editing sprites is available directly in GMS. 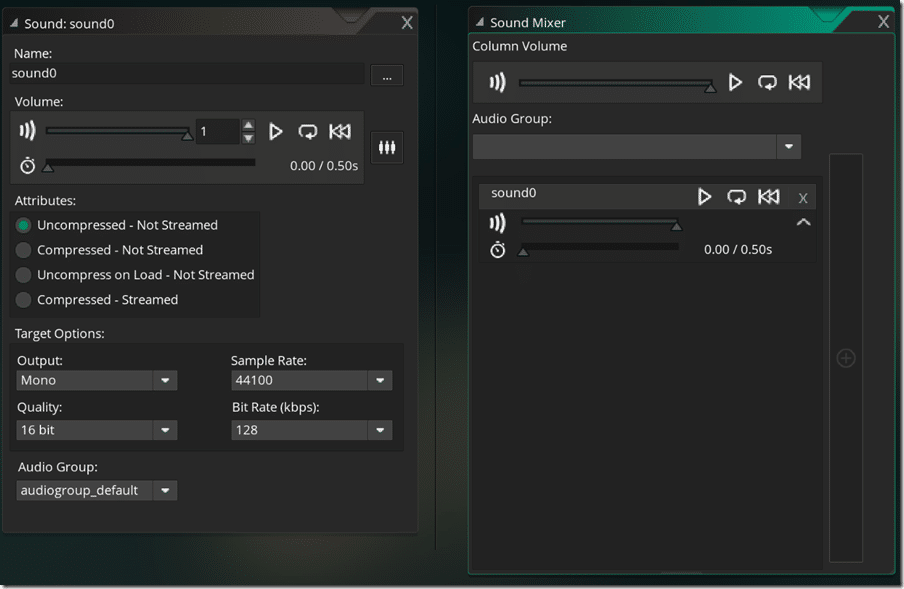 You also have control over sound effect details via the sound editor/mixer.  Supported audio files include wav, mp3, wma and ogg. 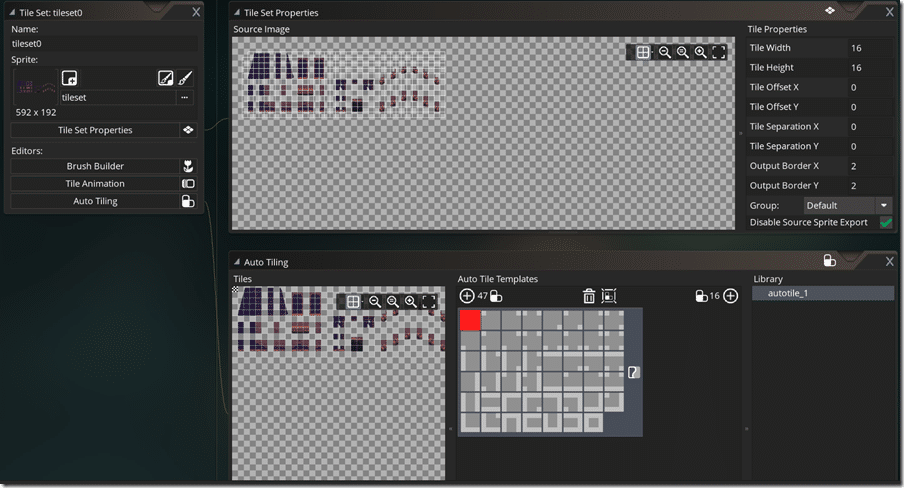 As mentioned earlier, the room editor has full support for tileset layers.  There is an editor for defining tilesets as well as defining auto tiling support.  There are also editors for defining tile animations and creating predefined tile brushes. 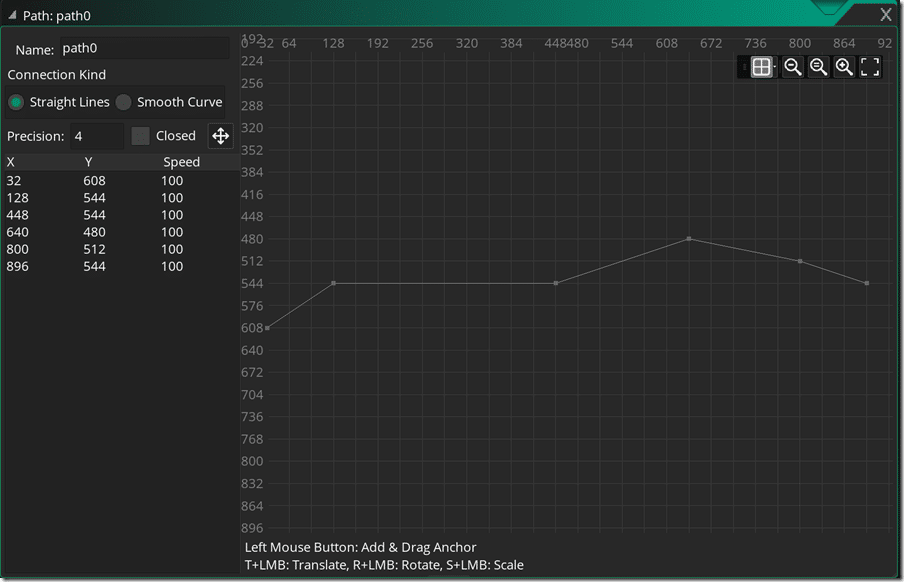 This editor is used to define paths, either straight line or curves.  Often used for AI paths, the generated paths can be used and editing directly in the room editor. 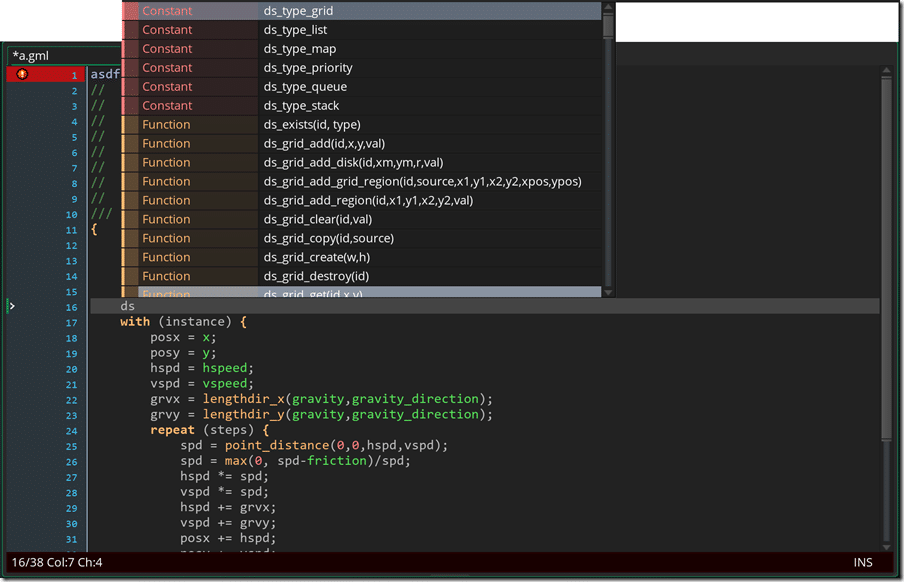 This is the built in editor for developing games using GameMaker Script.  It has syntax highlight, code suggestions, and a selection of other features. 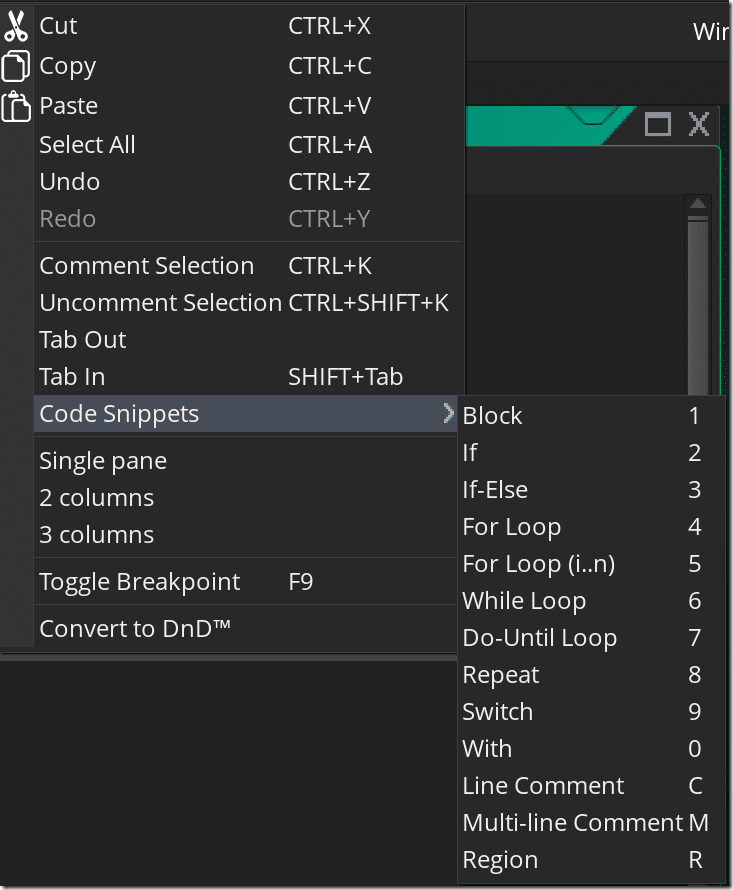 The code editor is also used for shaders. 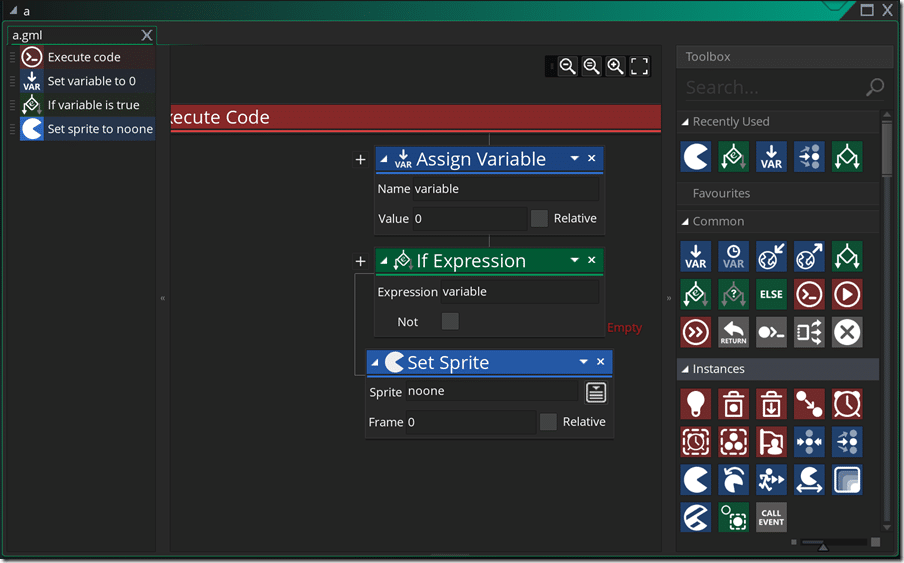 You can use drag and drop from the toolbox to script your program’s behaviour.  We will cover both programming options in more detail shortly.

Enables you to import and preview fonts for use in your game.  Fonts can be in either true type or open font formats. 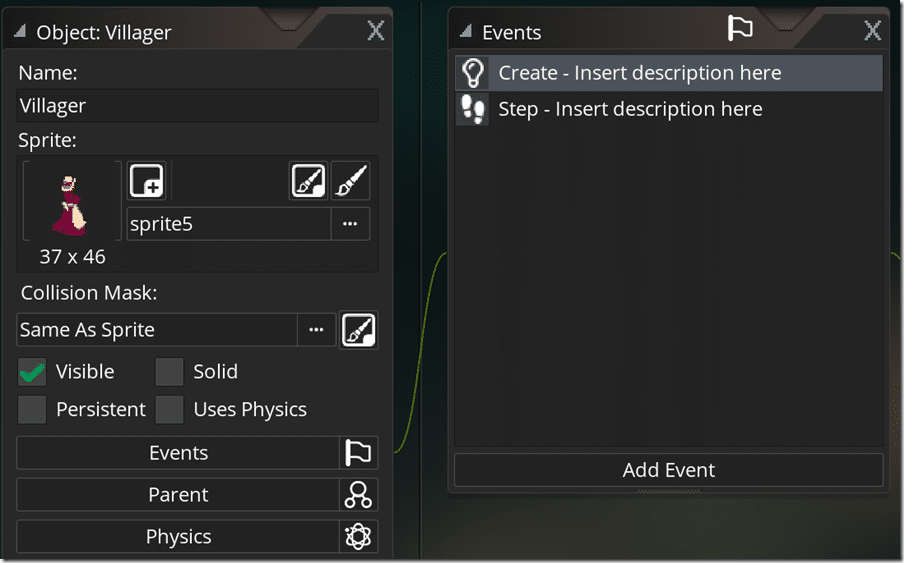 The Object Editor is where you will start to tie your various resources together.  For example, your main character will be an object that connects to a sprite, while handling various different events.  Objects are created in the Object Layers in the room editor and generally represent the entities that make up your world.  We will look at objects in a bit more detail later.

You may be wondering at this point how exactly you implement gameplay logic in your GameMaker game?  Essentially you attach logic to objects in the game world.  When you edit an object you will notice there is an Events option. 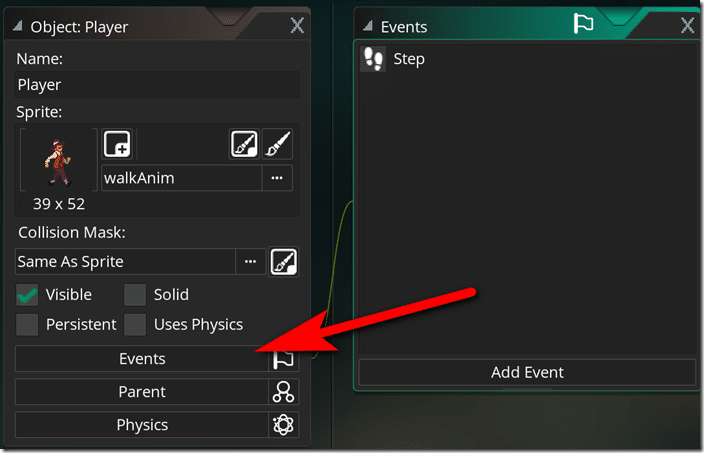 Click the Add Event button and you will see the various events you can respond to in your game: 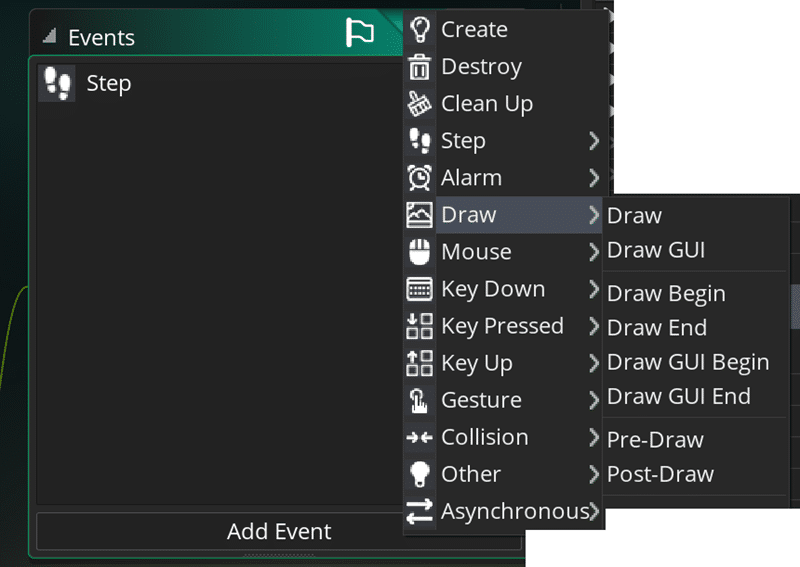 These are called at various points by the game engine and are analogous to the game loop in other engines.  Step is called once per pass through the game loop and is most commonly where you will handle update logic.  There are also events for when the object is created, destroyed, etc… as well as various options for responding directly to events such as collisions, touches, etc.

You can also wire up code to be called when a Room is created, via the Creation Code button:

Next, it’s a matter of deciding HOW you want to program in GameMaker, via Drag and Drop as well as directly using GameMaker scripting.

Scripting is done using Game Maker Language, or GML, which is a C like scripting language.  The syntax is fairly simple and if you’ve had any prior C, Python, C++ or similar language experience, picking the language up should be fairly simple.  There are built in methods for most functions you would want to perform such as graphics drawing, audio code, networking, platform specific tasks like in app purchases etc.  There are also built in data types such as Stacks, Lists, Maps, and Queues.  Actually teaching GML is beyond the scope of this document but you can access the language reference here.

If functionality is lacking it may be available on the GameMaker Market Place or you can add it yourself by creating a native extension.  You can add new functions to GML in this manner.

Programming via drag and drop in GameMaker is your other option and is a great choice for people that just want to jump in and figure things out on their own.  Don’t worry too much about performance as the DnD code is ultimately generating GML script so performance should be roughly the same.  In fact, you can switch freely between the two programming methods at will within the same project or call GML directly in your DnD script.

Creating scripts in DnD is as simple as dragging in predefined functions to create a flow chart of sorts that occurs top down, like so:

Once again, you can freely switch between the two methods.  Additionally, in any script, you can right click and select Convert To Drag and Drop.  A reference of all the drag and drop tiles is available here.

GameMaker is commercial software, so that means there is a price tag attached.  There are multiple versions available for GameMaker as well as additional platforms coming with an additional price tag.  Pricing (as of today, 12/6/17) breaks down as follows: 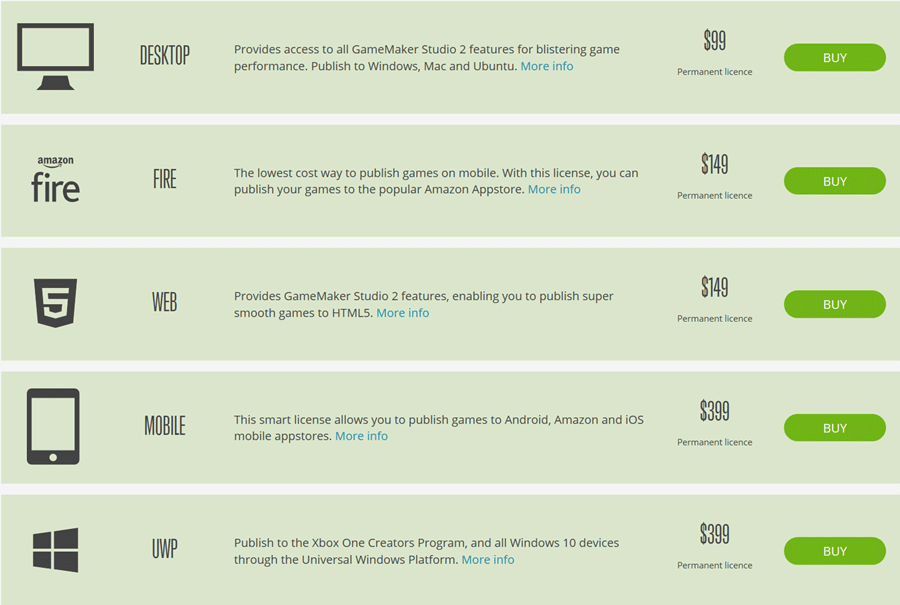 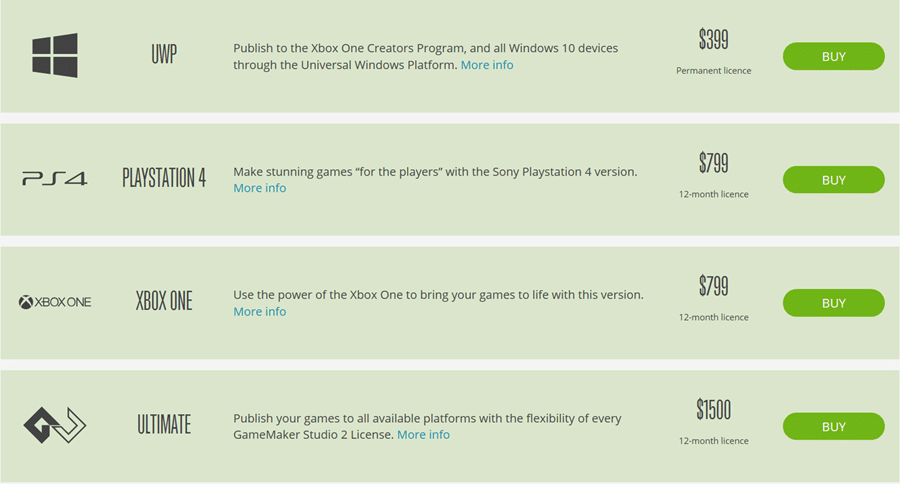 In addition to these various different platforms, there is also now a new $39 per year ( most of the above non-console licenses are permanent buy once ) Creator Edition aimed at hobbyist developers.  It is fully featured but requires you to choose Windows or Mac and also requires your game display a splash screen.  There is also a heavily limited free trial available.  For more information on pricing or to download the trial visit here.

As you might expect for such a long lived game engine, there is also a very well established community.  The forums are available here.  With almost 20K registered users and 230K posts, the forums are quite active and contain a wealth of knowledge, although much of it is for earlier 1.x versions.  Questions seem to be answered fairly quickly.  In addition to the forums, there is also the YoYoGames help desk containing several guides and how-tos.

There is also a fairly comprehensive GameMaker Studio manual available online which can be opened directly within Studio.

Additionally, there are several books available for GameMaker Studio such as:

In addition, there are several tutorials and starter kits available on the online marketplace, which we will talk about…

Quickly becoming the must have feature of modern game engines, GameMaker has an online store available, containing free and commercial assets including demos, scripts, sprites, shaders, extensions, and more. 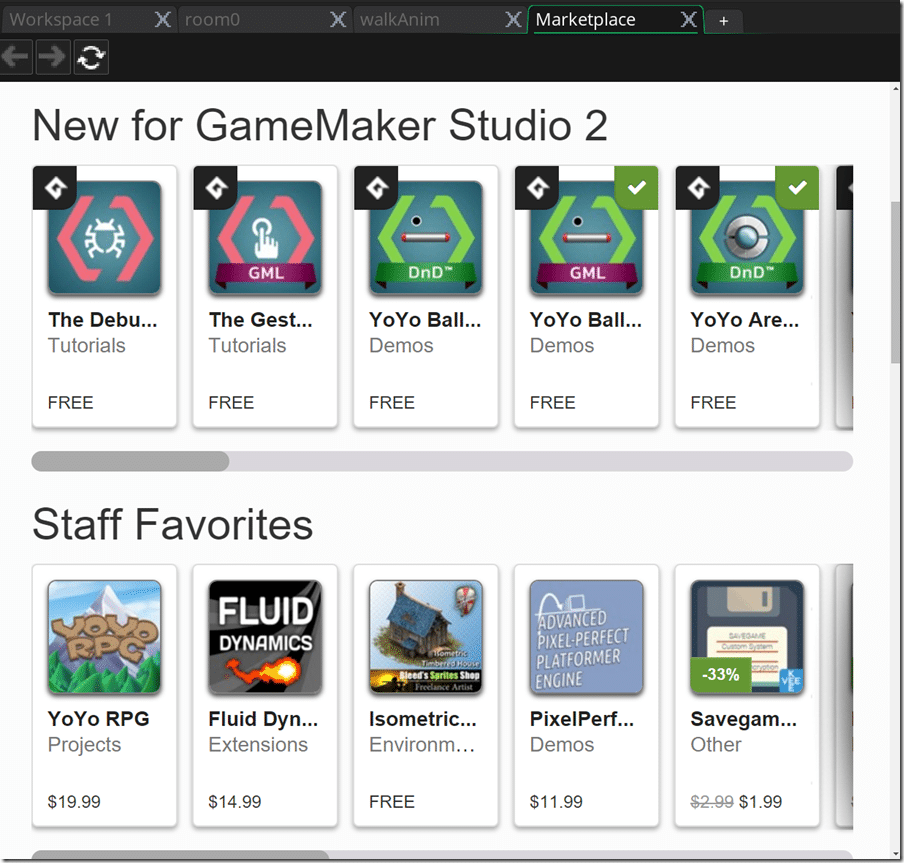 You do not need to have GameMaker Studio installed to access the marketplace, you can browse it in your browser here.

At the end of the day, GameMaker Studio faces a challenging new world as it is facing increasing competition from free and free to start game engines.  Is it worth it?  That is impossible for me to answer, as value is very subjective.  Game Maker is certainly a very complete 2D engine with a vibrant community and tons of resources.  Compared to the previous versions, the 2.x editor contains a great deal more polish and almost every tool you would need is included out of the box.   Game Maker has certainly proven itself a production capable engine, having powered such titles as Hotline Miami, Undertale, and Spelunky, all titles that have seen commercial success.

A proven catalog of games is always a strong selling point.

Personally, if you are working on a 2D title using Windows or Mac, Game Maker is certainly worth considering.  Do keep in mind however that as you add more platforms, you also add more cost.  In many cases though, this means you are ready to commercialize your title, so hopefully cost isn’t as much of a concern.  I do think however they are making a mistake in charging for the Creator Edition.  Personally I would do away with the trial completely, make Creator free, and charge people to deploy to additional platforms.  If this was the case it would be a great deal easier for me to recommend you check out GameMaker yourself.  Without a free option, it’s hard to recommend in the face of so many free/free to start options out there.  The engine is great, productive, proven, and easy to learn… just saddled with a bit of a dinosaur business model.