Welcome to the next section in the ongoing Closer Look at series, a series of guides aimed at helping you decide which game engine is right for you.  Each closer look at entry is a cross between a review and a getting started tutorial that should help you decide if a game engine is right for you.  Today we are looking at the Atomic Game Engine with the extensive editor support forked from the Urho3D game engine that I covered earlier.  The engine itself is written in C++ while the primary programming language is JavaScript, however .NET and TypeScript bindings are available as is a community created Haxe binding.

Wait you say?  A commercial game engine forked from an open source project??? Don’t worry, put down your pitchforks, this is an example of commercialization done mostly right.  First off, it’s a noticeable improvement over the original in many ways.  Second, much of the derived source code is still available freely and open source.  Finally the Atomic team are making pro licenses available to contributors of dependencies such as Urho3D, Box2D, TypeScript, Tiled, etc.  This is a nice approach and one I would like to see more closed software layered over open source software adopt.  There is also a free version available with limitations that we will discuss shortly.

As always, there is an HD video version available here.

The following details are no longer accurate.  Since this was published, the Atomic Game Engine transitioned to an MIT open source license and is now free to use.

As mentioned earlier, there exists a free option and a number of other tiers.  As of writing Atomic Game Engine is currently in Early Access which includes a lower price (and increased instability…).  The pro licenses include a lifetime of upgrades.  Here is the full pricing structure: 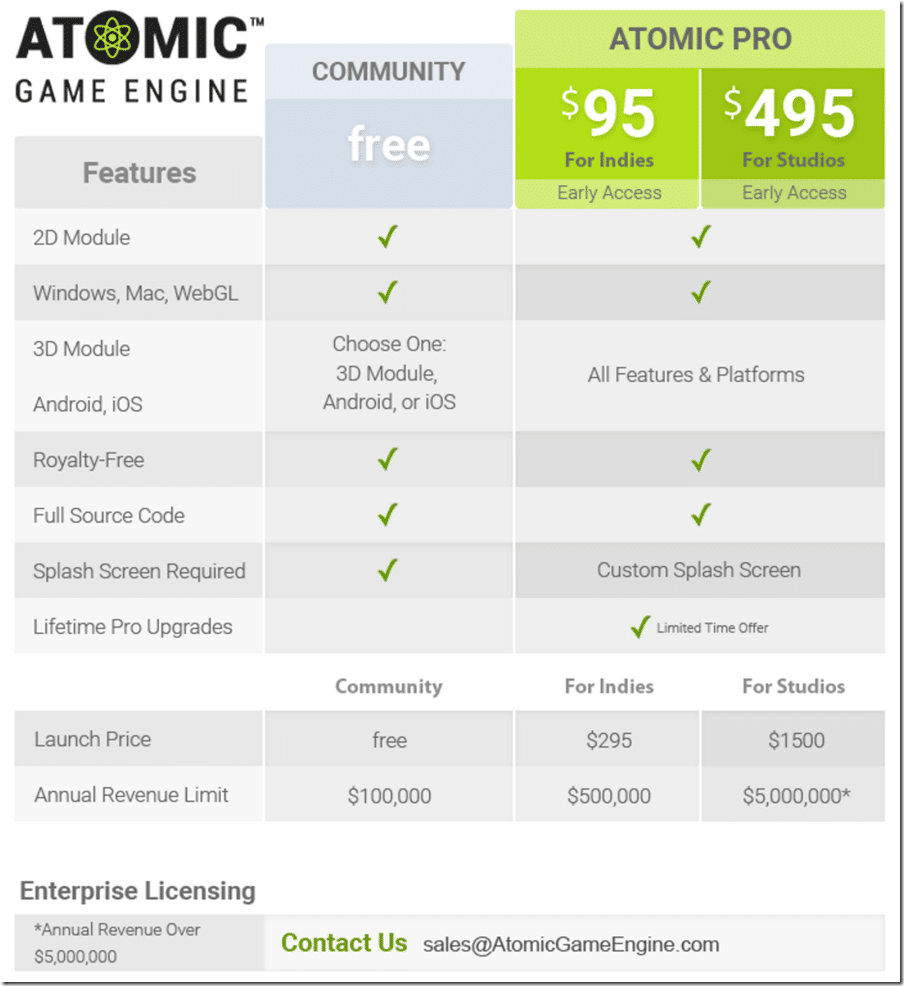 As you can see the free version you have to choose between 3D, Android or iOS support and must have less than $100,000 annual revenue and includes a splash screen.  The indie license revenue is capped at $500,000 and there is no splash screen requirement.  In my opinion at least, this price tier is fair.  One major caveat however, to build completely from source you will need a Pro license otherwise you have to wait for new binary releases.

The editing environment is probably the biggest feature of Atomic, so lets start there.  This is the welcome screen when you first load Atomic Editor: 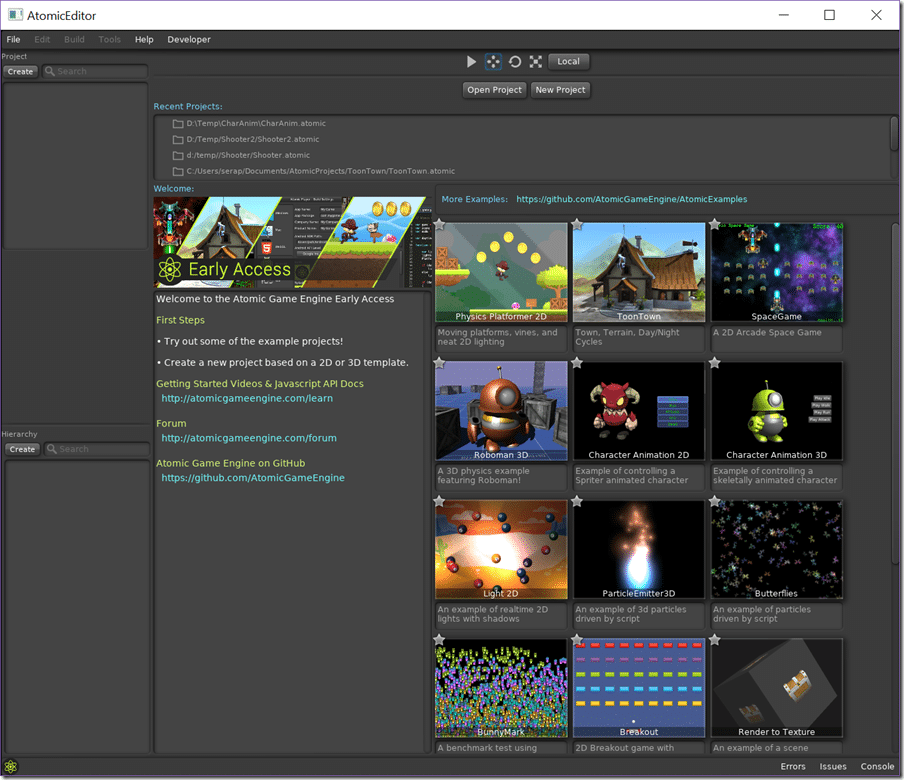 As you can see there are several sample projects to start from.  Create a new project using File->New Project menu, which will show the following dialog: 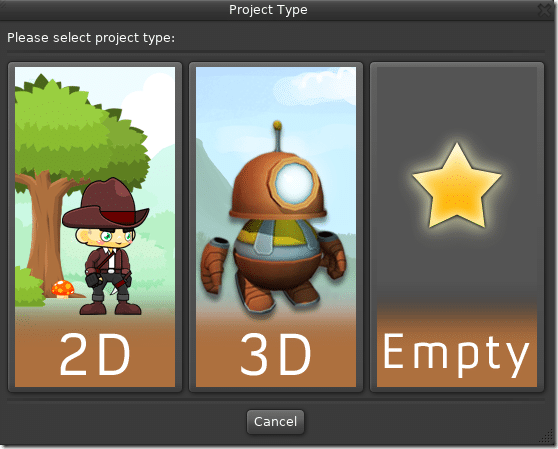 You can work in 2D or 3D mode within Atomic.  For this example I will choose 2D.  Next define your project settings:

You will notice that TypeScript and JavaScript are the default languages available.  You can work in .NET, Haxe or even using C++ but at this point in time you will be mostly on your own.  The tooling and documentation is mostly oriented for JavaScript development for now.  As it is layered over Urho3D, if you are comfortable in using Urho3D with C++ you should be able to adapt to C++ in Atomic fairly simply, plus the majority of documentation is still applicable with minor changes.  C++, .NET and Haxe targets are beyond the scope of this review however.

With Scene.scene selected you can see that a default scene contains a Camera and a Node entity.  Like most modern game engines Atomic uses the composition approach, although instead of Entities and Components, you have Nodes and Components, but the end result is very similar.  Now that we have a scene selected, it should be visible in the middle portion of the UI: 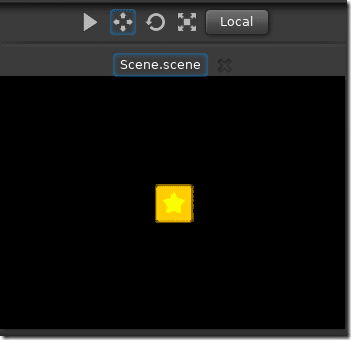 This is where you select and arrange the entities within your scene.  You can instance new entities… er, nodes by dragging them in from the left side of the screen.  With a node selected, the right hand side shows the property inspector giving us access to the properties of the node as well as the components it contains: 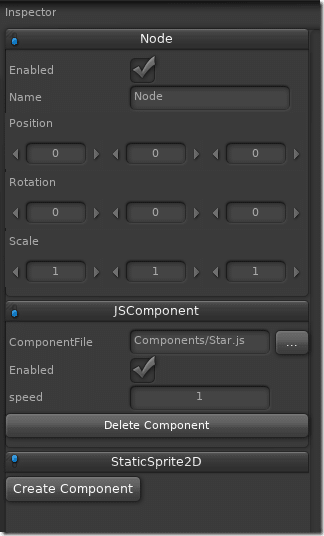 Adding new items to the scene is trivial, simply click the Create button in the hierarchy area.  The options are limited to Node or for some reason in 3D there is an option for Light.  You can also create a prefab instance that we will discuss later.

However for adding components there are a ton more options available.  Adding a component is simple a matter of clicking Add Component in the inspector with the appropriate Node selected. 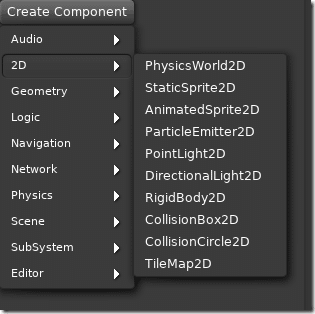 Each component type has it’s own corresponding editor.  The following for example is the Rigid Body components editor:

Game assets can be imported via drag and drop.  This process automatically triggers the appropriate importer:

The primary or lead programming language when working with Atomic Game Engine is JavaScript, while .NET, Haxe and Typescript language bindings exist (but aren’t documented).  The source code is primarily written in C++, while the editor is created using the Typescript language.  You could of course code your entire game using C++ if you preferred, but again, the process is currently undocumented.  The programming model is pretty intuitive and quick to come to terms with.  For the following code examples, I will be looking at the Platformer2D example.

Taking a quick look at the generated source code, you can find your project’s entry point in the Scripts folder: 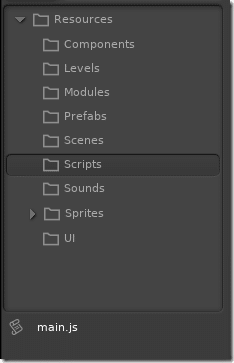 Here are the contents of main.js:

This is actually a fairly advanced main.js, some are as simple as:

In this particular example the first half of the code demonstrates programmatic generation of a UI.  The later half creates an on screen controller if running on a mobile platform.  As you can see from the second, much shorter main, it can be as simple as calling loadScene() passing in the scene you create using Atomic Editor.

The majority of code in your project will be organized in components:

Components are attached to Nodes just like any other component.  Here for example is a script component attached to the Level node in the platformer example: 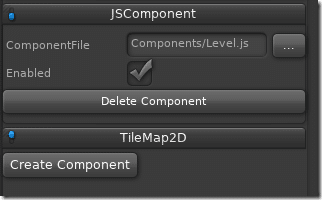 And the contents of that script:

You may notice the exports statement at the bottom of the example and the require statement at the top.  Atomic uses CommonJS for module support.  This particular example implements the start() method, which will be called automatically on the component during creation.  There is a method update() that will be called each pass through the primary game loop and is where the majority of your game logic will most likely be performed.  You can also create and subscribed to arbitrary events, enabling easy component to component component communication.

This example also illustrates another powerful feature of AGE, prefabs.  In the line:

This is programmatically creating a prefab named Player from the file Prefabs/Hero.prefab.  Prefabs are simply pre-configured Nodes that can be re-used and instanced easily.  To create a prefab you simply create a node, add it’s various components, then drag that node up into your project resources, generally into a folder called prefab.

One other thing you may notice is that double clicking a script brings up an integrated code editor: 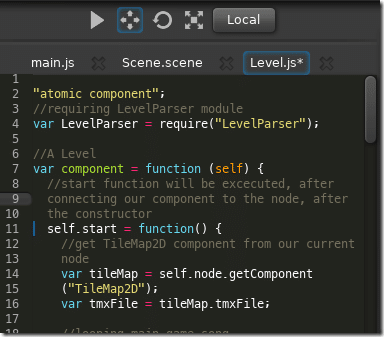 This is an incredibly handy feature that is sadly somewhat broken right now.  Normally the editor has a great deal more functionality including full code completion but a bug resulted in it’s removal.  As of writing they are in the process of integrating Chromium and improving the integrated editor.  That said, the majority of users make use of an external editor.  One popular choice is the Atom editor, which has a Atomic Game Engine package available:

This enables you to run Atomic projects directly from the Atom editor, or to open the current project in the Editor.  That said, it didn’t actually work for me, saying atomic-cli NPM package needed to be installed, which it was.  Not sure what the error here was.  On cool thing about using Atom as your editor, is if you also use the Typescript language, you get complete and accurate intellisense in the editor: 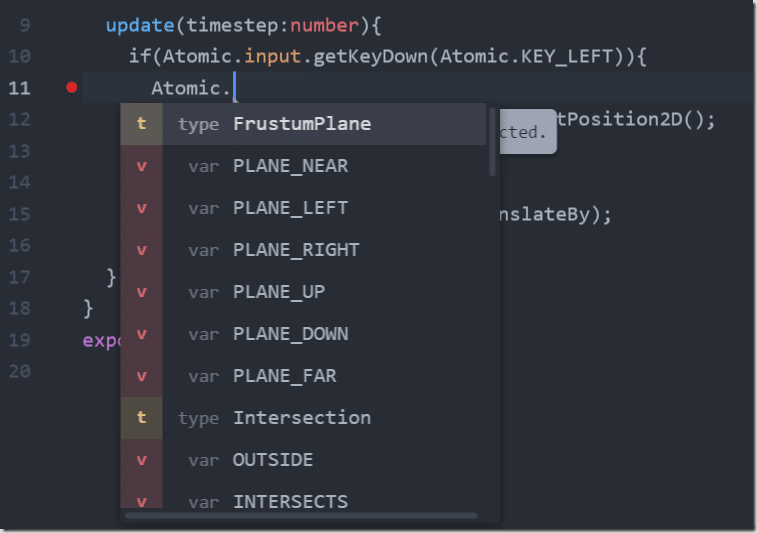 There is a Typescript seed project (among other things) available in this Github repository.  You may have noticed a few moments back that I mentioned a CLI, or command line interface.  Assuming you have Node installed, you can install it using the command

This interface enables you to create, edit and run projects directly from the command line, which also makes it easy to integrate AGE into existing text editors such as Sublime Text or Notepad++.

The actual coding process is a bit beyond the space/time we have available here.  Given that Atomic is built on top of Urho3D you can expect a full featured and expansive API including pretty much all the functionality you expect from a modern 2D or 3D game engine.  If you want more of a taste for what coding in AGE is like be sure to check out the examples repository which contains a pretty comprehensive set of examples to learn from.  Of course the existing Urho3D documentation is also a good source of information, although some things will obviously be different as this is a fork.

Once you finish developing your game it’s time to deploy and AGE makes this process easier than most.  Depending on version, the following platforms are available:

And building for a platform is as simple as choosing Build->Build Settings and filling in the appropriate values:

As is often the case with in development engines, documentation is not the strong point of Atomic Game Engine.  There is a complete reference guide available somewhat confusingly under the videos section of the AGE website.  There is also a robust collection of examples available, which truth told is going to be your primary source of information for the foreseeable future.  As this engine is based on a fork of the Urho3D engine, a good chunk of Urho’s existing documentation is still applicable, although it will be a challenge for new developers to figure out when this is and isn’t true.

There is a community forum with a  growing community.  It’s not exceedingly active, but almost every single question goes answered, which is a good sign.  Additionally there is a Gitter chat which can be thought of as a version of IRC that  lasts forever and no doubt pulls a bit of traffic away from the forum.  It does seem to be quite active and a fast source for answers.  Bugs and features are tracked using github and are very active making development quite transparent.  Finally there is a Wiki, but it is extremely sparse at the moment.

Atomic Game Engine is very much an engine under development and at times it shows.  On the other hand, it is based on a very mature engine, so there is no reason you wouldn’t be able to use it in a production ready environment.  I am not going to answer the question “Is it worth it to use Atomic instead of Urho3D?”, as value is an incredibly subjective concept.  What I will say is the Atomic Game Engine adds a layer of tooling and polish on top of a game engine that required a layer of tooling and polish and did it well.  The developer experience using Atomic is a great deal nicer than the developer experience using Urho3D.

On that point, would I recommend Atomic Game Engine to new users?  No, not yet, but mostly due to the in development nature and the current lack of documentation.  In the future though, I imagine all of that will change and this will be an easy to recommend engine.  Now, what about to more experience developers?  Well if you are willing to work on an engine that is under development, there is certainly a lot here to like.  If you are looking for a Unity-esque editing experience, but with a much cleaner coding experience and access to the source code, certainly give Atomic a shot… especially with early access pricing in effect.