Hmmmm, really need to settle on a name for the bipedal robotic characters that isn’t Mech/Mecha soon just to ease these conversations! Not my most creative day so I’ll just go with GPR now.

Anyways, the GPR is very much fundamental to the game.  One of my favorite things about Autoduel and Mechwarrior Mercs was the sense of acquisition.  Start with a lowly machine and work your way up the ranks.  One of my favorite factors of Chromehounds was the customization aspect.  I intend to incorporate both into our game.

The very first Mech, er GPR the character starts with is 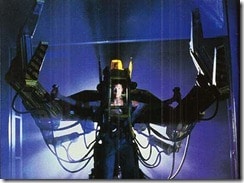 very primitive, like the Powerloader from Aliens that Ripley used.  Very simple bipedal machine with a single weapon forward firing weapon mount.  As the player wins matches, they will have the option of swapping that weapon out for better weapons and eventually with be able to buy better GPR frames.  In the end though, it will entirely be about trade offs.

Each frame will have a certain number of slots available, of different sizes to accommodate different sized weapons.  Additionally frames will be able to have different power plants, that will be a factor in speed, battery life, weapon power and charges.  So you could mount a big heavy laser, that really sucks the juice or mount smaller engine which would be lighter and faster but couldn’t power the weapons as well.

It is all about trade offs, so you could create a fast lightly armed frame, or a heavily armed slow machine or simply an average all around machine.  You could also use munitions based weapons like rocket launchers or machine guns that don’t use energy from the engine, but once they run out of ammunition are as good as useless. 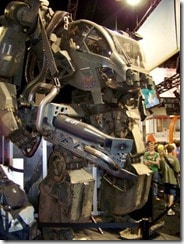 All frames start with a certain amount of energy, tied to the type of power plant installed.  Things like the weight of the frame ( from weapons and armor ), firing of energy weapons, running at high speeds, taking damage from certain types of weapons, etc.  If energy goes to zero, you stop dead and can’t fire.  Engines will recharge slowly on their own, so you need to balance speed and weapon use to keep your power levels healthy.  Or, go with a power plant that has a rapid recharge rating.  In my head now, statistically a power plant is rated by:  size ( amount of space needed by frame to install ), weight, power available, recharge rate and frame class(es) ( what size of frames the engine can be install into ) and finally cost.

So, in the beginning, machines would be only a few meters tall, with a single weapon and underpowered engines and minimal armor.  By the end though, the player could be piloting a literal titan, several meters tall and bristling with weapons and armor.  Of course then, so will their enemies.

From a developers perspective, this means I need to figure out how to make weapons 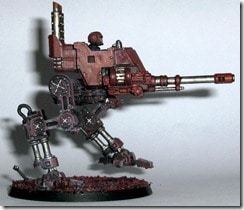 modular.  In the end I imagine this comes down to dynamic parenting of bones, but it is something I need to look into from a technical point of view before continuing too far ahead.  I had been tempted to make frames even more customizable, so different legs, torsos, cockpits, arms and weapons, but truth is I think the level of work is too high to handle right now, especially when it comes to creating the animations.  If the modular weapons end up being not too difficult, I may revisit this concept.

You know, the name Frames is starting to grow on me.  BattleFrames?  Battle Frame Formats?  Yeah, that’s the perfect name, BFF!  Oh, wait….  *groan*  Back to the drawing board.

For those looking at the various inspirational images in this post, they are from the top Ripley in a Power Loader in Aliens, the Walker from Avatar and finally the Imperial Guard Walker, which is probably the closest in my minds eye to the kind of vehicle the player will start in.  Think of it like the go-cart of Frames.