Photoshop has always been the big boy in the 2D imaging world and I have always found it a bit too expensive at the @ 800$ a license.  What would you say though if you could instead 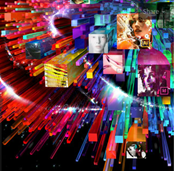 buy Photoshop CS on a subscription basis for 50$ a month?

How about if I threw in some cloud based features like online storage?  Still not sold?

Ok, how about if I threw in Photoshop Touch as well?  Still not convinced?

Because that is exactly what Adobe just did!

The newly announced Creative Cloud appears to be a an all you can eat subscription to pretty much everything Adobe makes, coupled with their fairly new web services, like 2GB of cloud storage.

Pricing starts at 50$ on a annual commitment basis, rises to 75$ on a month by month basis.  If you are already paying for one or more CS products, this represents a massive discount.  Oh, speaking of already paying, if you are an existing subscriber, it is available until August 31 at 30$ a month!.

EDIT: I suppose I should point out, you can’t actually buy it yet, its in pre-order at the moment.