Not every day that there is a new player in the AAA game space, but that’s exactly what just happened with the release of Lumberyard by Amazon.  Amazon has been getting more and more involved with gaming with the launch of their own game studio coupled with their purchased of Double Helix games back in 2014.  Their cloud computing solution, AWS (and more specifically EC2 and S3) have both proven incredibly popular with game developers, providing the networking back end for companies such as Rovio and Ubisoft.  Today however they just made a much bigger splash with the release of a complete game engine, Lumberyard.

Now Lumberyard isn’t actually a brand new engine, in fact it appears to be a mashup of a number of technologies including CryEngine, in house tools created by Double Helix Games and cloud services from AWS, specifically the new Amazon Gamelift service, which is described as:

Amazon GameLift, a managed service for deploying, operating, and scaling session-based multiplayer games, reduces the time required to build a multiplayer backend from thousands of hours to just minutes. Available for developers using Amazon Lumberyard, Amazon GameLift is built on AWS’s highly available cloud infrastructure and allows you to quickly scale high-performance game servers up and down to meet player demand – without any additional engineering effort or upfront costs.

Lumberyard will also feature Twitch integration, and perhaps most interestingly, launch with support, both in forum and tutorial form but also in a paid form, something that is often lacking.  Lumberyard tools only run on Windows 7,8 and 10, while the supported targets at launch are Windows, PS4 and Xbox One.  Of course a developer license is required to target either console.  About the technical bits of Lumberyard:

The Lumberyard development environment runs on your Windows PC or laptop. You’ll need a fast, quad-core processor, at least 8 GB of memory, 200 GB of free disk space, and a high-end video card with 2 GB or more of memory and Direct X 11 compatibility. You will also need Visual Studio 2013 Update 4 (or newer) and the Visual C++ Redistributables package for Visual Studio 2013.

The Lumberyard Editor encapsulates the game under development and a suite of tools that you can use to edit the game’s assets. 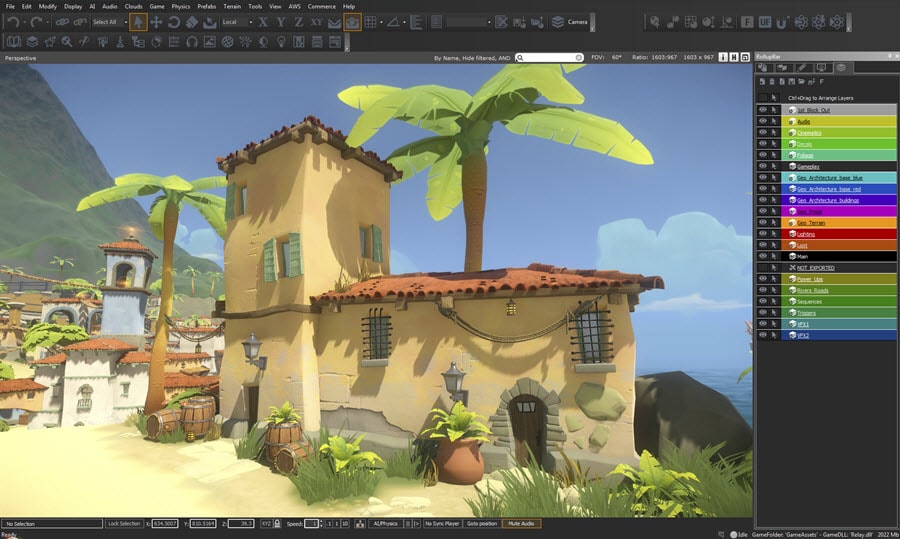 The Lumberyard Editor includes a suite of editing tools (each of which could be the subject of an entire blog post) including an Asset Browser, a Layer Editor, a LOD Generator, a Texture Browser, a Material Editor, Geppetto (character and animation tools), a Mannequin Editor, Flow Graph (visual programming), an AI Debugger, a Track View Editor, an Audio Controls Editor, a Terrain Editor, a Terrain Texture Layers Editor, a Particle Editor, a Time of Day Editor, a Sun Trajectory Tool, a Composition Editor, a Database View, and a UI Editor. All of the editors (and much more) are accessible from one of the toolbars at the top.

In order to allow you to add functionality to your game in a selective, modular form, Lumberyard uses a code packaging system that we call Gems. You simply enable the desired Gems and they’ll be built and included in your finished game binary automatically. Lumberyard includes Gems for AWS access, Boids (for flocking behavior), clouds, game effects, access to GameLift, lightning, physics, rain, snow, tornadoes, user interfaces, multiplayer functions, and a collection of woodlands assets (for detailed, realistic forests).

Coding with Flow Graph and Cloud Canvas
Traditionally, logic for games was built by dedicated developers, often in C++ and with the usual turnaround time for an edit/compile/run cycle. While this option is still open to you if you use Lumberyard, you also have two other options: Lua and Flow Graph.

Flow Graph is a modern and approachable visual scripting system that allows you to implement complex game logic without writing or or modifying any code. You can use an extensive library of pre-built nodes to set up gameplay, control sounds, and manage effects.

Flow graphs are made from nodes and links; a single level can contain multiple graphs and they can all be active at the same time. Nodes represent game entities or actions. Links connect the output of one node to the input of another one. Inputs have a type (Boolean, Float, Int, String, Vector, and so forth). Output ports can be connected to an input port of any type; an automatic type conversion is performed (if possible).

Finally we come to price.  Lumberyard is free*.  I say free* instead of free because of course there is a catch, but an incredibly fair one in my opinion.  If  you use Lumberyard you either have to host it on Amazon servers or on your own.  Basically you can’t use Lumberyard then host it on a competitor such as Azure or Rackspace.  Pricing is always a bit tricky when it comes to Amazon services, but unlike Google, they have never once screwed their user base (Google once jacked up prices by an order of magnitude, over night, forever souring me on their technology), so you are pretty safe in this regard.  More details on pricing:

Amazon GameLift is launching in the US East (Northern Virginia) and US West (Oregon) regions, and will be coming to other AWS regions as well. As part of AWS Free Usage tier, you can run a fleet comprised of one c3.large instance for up to 125 hours per month for a period of one year. After that, you pay the usual On-Demand rates for the EC2 instances that you use, plus a charge for 50 GB / month of EBS storage per instance, and $1.50 per month for every 1000 daily active users.

I intend to look closer at the Lumberyard game engine as soon as possible, so expect a preview, review or tutorial shortly.