First off, sorry for the horrible pun… I wont do it again… at least not today.

That said, Unreal may have just flipped the industry on it’s head… or may have just dropped a cleaver marketing gimmick.  By now you have probably heard that Unreal Tournament development will be done in the open.  At least for Unreal Engine subscribers it will be.  Basically if you subscribe to Unreal Engine for 19$ a month, you get Unreal Tournament for free.  The biggest part of the announcement is you get access to a Github repository, so you can watch the game develop, or perhaps even get involved!

In Unreal’s own words:

SO WHAT’S THE CATCH?

So why do I find this move so impressive?  There are a couple reasons…

First I was wondering if I would maintain my subscription.  If I am not actively developing in Unreal Engine, was there any point in paying 19$ a month?  I, and many others, wondered if Unreal would keep a stream of content coming that would keep developers paying.  To actively open up a potentially AAA game’s development process is certainly a good hook to keep me watching.  ( Plus, they’ve done a pretty good job keeping the content coming… more on that in a second ).

Second, quasi-open sourcing a game could be a brilliant strategy.  Indie developers get to contribute to a large project, probably beyond the scope of what they would otherwise be able to participate in.  Unreal of course gets a ton of free development effort, but retains dictatorial control that large scope games need.  Of course they will have to be selective about what they commit to their main trunk and may bruise some egos, so this could be a bit of a balancing act and will require additional resources on their end, but the trade-offs are probably worth it.  I would generally think this would be mostly a read only process, basically just Unreal developing a game and the community watching.  However they have recently accepted a number of community fixes into the Unreal engine base, so I don’t think this is just marketing.  If nothing else, many indie game developers get the opportunity to eavesdrop on a AAA game’s development, including developer discussions and twitch streams, for a price tag of 19$ a month.

Of course, this is a from scratch project, so have very little expectations for now!

Finally and perhaps most disruptively “create a marketplace where developers, modders, artists and gamers can give away, buy and sell mods and content. Earnings from the marketplace will be split between the mod/content developer, and Epic”.  This point is MASSIVE.  Basically Unreal are releasing a F2P title where the microtransactions come from the community.  This is a powerful concept, enabling artists and coders to actually get paid for their work, using the exact same tools and process as the parent.  Just as artists and programmers can make a living providing assets to the Unity store, in the future, they will potentially make a living contributing to a game.  A game they potentially helped create.

Oh, remember earlier where I said Unreal would have to keep a pretty steady stream of updates to keep people subscribed?  Well, impressively enough, they have been.  Since the 1.1 patch ( adding XBox One and PS4 support ) there have been a half dozen new tutorials added, covering topics such as Localization, skeletal meshes and Blueprint complexity management.  Additionally they added a SciFi hallways level: 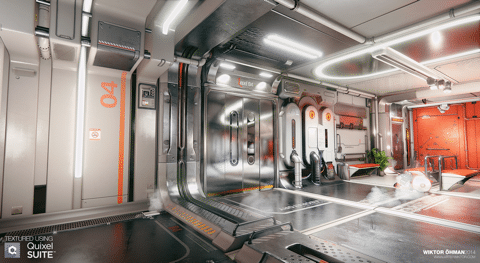 The marketplace is quickly being populated with professional quality examples to work from.  You can read more about the design process here.

I have to say Unreal are impressing the hell out of me.  They are taking bold risks and truly are throwing their resources at this, it’s not some half assed indie release like CryEngine or prior UDK releases… this is a slick well supported product and most importantly a thriving community.  Unreal are willing to try some very disruptive strategies and we should applaud them for it.

I for one will be keeping my 19$ a month subscription going.

Oh yeah, and on that topic, they’ve also laid out a blueprint ( ugh, bad accidental pun! ) for future Unreal development.  You can check it out here on Trello.  This transparency is certainly a good thing.  You can also vote and comment on features that are most important to you, a nice feedback loop with subscribers.