Since I’ve been working on a Mac more and more often these days, I’ve been looking for an alternative to the wonderful Windows Live Writer for Windows.  I started with a trial of MarsEdit, which I really liked, except it’s inability to display formatted source code ( a big deal for me ), its lack of tagging ( not a really big deal, but a nuisance ) and the lack of image formatting options.

Then I found and discovered Adobe Contribute, which has a 100$ price tag.  It started off strong but quickly took a jump off a cliff into the land of truly awful.  It seems to be poorly supported by Adobe, has documented features that don’t appear to exist anymore, has some gigantic bugs ( such as the Paste menu never being enabled! ).  It did however have incredible table formatting tools!  I know in the age of CSS, table is a bit of a swear word, but damned if a lot of your data isn’t in a tabular format.  The image formatting options were easily the best of all packages I’ve used, including Live Writer.  But good tables and good image positioning tools don’t even come close to making up for the brutal flaws, especially at a 100$ price point.

I then tried out Qumana, a completely free option: 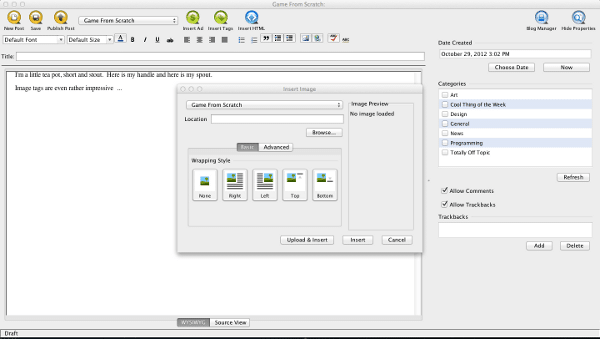 At first glance, it pushes all the buttons.  It doesn’t support tags ( only Live Writer seems to ), but image formatting is decent, and you can directly edit the HTML of your post, so if you know HTML, the sky is the limit.  I attempted to write the previous post with Qumana and ran in to a gigantic deal breaker attempting to insert an IFrame… you can’t.  I pasted the HTML code for a Youtube video, then when I switch back to WYSIWG view, poof gone.  Game over.

So then, back to MarsEdit, which I went ahead and purchased.  In the end, MarsEdit was easily the best option of what is available for Mac.  The biggest sellable point was the ability to drop to and edit HTML, which is nicely preserved when switching back to rich text mode.

Now, Red Sweater, if you are listening, please add the ability to create plugins, or failing that, the ability to post formatted source code.  Also, tag support would be nice!

If you are a MarsEdit user, and currently post code samples on your blog, how are you doing it?