If you’ve recently been to the GameFromScratch tutorial series page recently you may have noticed the addition of a new Armory game engine tutorial series.  It’s not actually hosted on GameFromScratch, instead it’s on our newly launched sister site (watch out, the paints still wet!) DevGa.me.  Don’t worry though, nothings changed, it’s just a newer, cleaner, 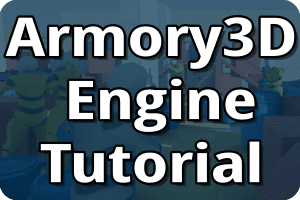 mobile friendly home for tutorial series, I’ll explain more about this later.  For now, just be aware there is a new text and video based tutorial series on the Armory game engine under development!

Armory (or Armory3D) is a newly free open source cross platform game engine that runs inside and tightly integrates with the Blender application.  If you are interested in learning more about Armory and why I’m so excited about it, be sure to check out Introduction to Armory video.  The series is still quite young but already there is a fair bit to get you started.  Right now the series consists of:

Additionally the video series has begun, lagging slightly behind the text series.  So far videos consist of:

There is a (very small for now…) playlist available here.

DevGa.me is not a blog format and does not have any news, it’s just home to tutorials.  I will however announce new tutorials here on GameFromScratch, so stay tuned!  If you want to discuss the new series, there is a conversation over on the Armory discussion forums or leave a comment below or on YouTube.