This one comes care of Tom’s Hardware:

Autodesk has introduced Maya LT, a new 3D animation product based on their award-winning Maya software. This new product also brings with it a subscription pricing model that they hope will make it more affordable to indie developers. 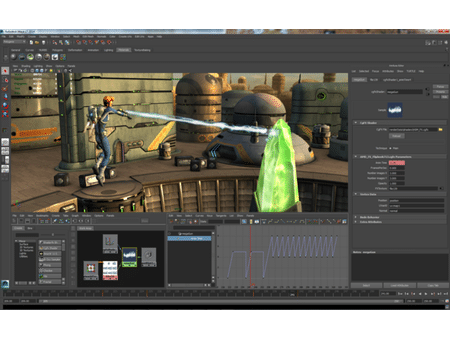 Indie developers, whether working for mobile, PC, or web-based games, need a professional 3D animation software that can be used to create 3D and 2D assets to be used in game engines. Autodesk has developed Maya LT as a new product whose focus is on the needs of indie game developers. It brings the established tools of Maya into the affordability range of indie game developers and also allows them to import assets that were created in Maya proper (as well as OBJ and FBX), giving them access to thousands of available models from sites like Turbosquid. Through support for FBX export, Maya LT also can be used for game engines like Unity Engine and Unreal Engine.

I have been advocating for an indie friendly version of Autodesk products for a long time, as they are easily the most expensive aspect of the game development tool chain.  This release certainly lowers the price, but does it lower it enough?

Maya LT is available immediately for both OSX and Windows at a price of $795 for a perpetual license. Term licenses are available as part of a monthly, quarterly or annual rental plan in the near future, starting at $50, $125 and $400, respectively.

So, 800$ is certainly a better price than 3,675$ for a license of the full version.  The monthly and quarterly licenses are certainly a great option for short term game development and complement the Adobe Creative Cloud offerings nicely.  But…

What exactly do you give up for that savings?  Well, here is where things get a bit tricky.

The first item, the inability to render scenes means you cannot use Maya LT to create pre-rendered animations, such as cut scenes.  Perhaps worse, you also can’t even create a composited still, or any graphic more complicated than a rendered sprite.  So if you were thinking about rendering your title screen using Maya LT, you are out of luck.

No MEL support; that either sucks or is a non-issue depending on your workflow.  No plugin support is the same story with a bigger downside.  The inability to support plugins makes Maya LT completely useless for game engines that require plugin support such as the indie friendly Project Anarchy.

FBX export limited to 25,000 polygons.  This is probably the biggest problem as higher polygon count meshes are becoming more and more common as devices improve in power.  Granted, you generally wouldn’t use this many polygons on a standard mesh in a mobile title, yet.  On a desktop title though, you certainly would.  Perhaps the biggest downside is, this limit pretty much precludes you using Maya LT as your level editor.

In the end, it is certainly a step in the right direction but falls flat for me.  If Blender didn’t exist and wasn’t getting better with every release, this might be more appealing. At 800$, that is getting incredibly close in price to Modo, Lightwave and Maxon in price.

Oddly enough, Tom’s Hardware is the only source of information right now.  There are no details on Autodesk’s site.  I will update more information as it becomes available.

The Tom’s Hardware link is now down and as it was the primary source of this information there may be something fishy with this story.  I have found no other source to verify the story, nor have I heard back from Autodesk.

Shawn McClelland from Autodesk’s games solution group made the following post, with a great deal of clarification over on the Polycount forums:

Hey guys!
My name is Shawn McClelland and I am a product designer over on the games solutions group. I’ll pause in case people would like to throw any objects at me upfront.

I wanted to come in and clarify a couple of things with regards to the Maya LT release and hopefully answer any questions you all might have or listed to your input/feedback.

As far as the 25k poly limit goes this is purely on export so the FBX file will not store anything larger than 25k. You could stuff a gigajillion polygons into a Maya LT scene and still save out the LT file and have zero issues but when you want to export that out to your game engine it needs to be packed in 25k chunks. We felt that limiting the contents of the scene was dumb but wanted to manage things on export a bit better so that’s the reasoning there though we’re not adverse to hearing your input and changing this to suit your needs.

With regards to the scripting I will say yeah it’s a bit of a bummer and I totally get the disappointment of some tools guys or folks that like to rely on third party scripts floating out there on the web. We’ve heard this feedback and it’s loud and clear to us that you need a scripting solution as part of this offering so we’re going to see what we can do here. There is no Script Editor inside of Maya LT by the way just to clear that up as well.

JonJones: Your feature list isn’t actually all that far off from what LT provides

We did our best to provide a feature set that was enticing to the non-highend crowd so we removed things like rendering features, dynamics and various other things that cause a ton of UI bloat but aren’t really all that useful to the indie, mobile, casual games developer or the freelance modeler. While we don’t provide an SDK out of the box we do provide ShaderFX, FBX and Turtle all as pre-compiled included plug-ins. For third-party stuff we have a few ideas we’ve been mulling about but I don’t think I can go into specifics just yet but if there are plug-ins you feel are a necessity to your work please let me know and I’m happy to work with dev on it.

For Rendering output we’re relying on the VP2.0 and playblast options to output essentially hardware renders of your scene. Turtle is also provided for map baking needs as well and we’ve got a pretty sweet build of ShaderFX included as well that will let you build node networks for surface shaders. I have a few sample scenes I’ve built up using ShaderFX if people are interested including a version of the DOTA2 Hero Shader I’ve been working on as a ShaderFX graph.

Hopefully I’ve answered some questions and concerns here. If you have any further questions please don’t hesitate to ask me via these forums or you can reach me direct at shawn(dot)mcclelland(at)autodesk(dot)com. If you’re interested in becoming a beta tester you can also email me about beta participation and I’d be happy to get you added to the LT program.

It basically confirms the majority of what was said earlier.  They are listening for feedback though, so if you strongly disagree with the 25K limit or removal of scripting for example, let them know!