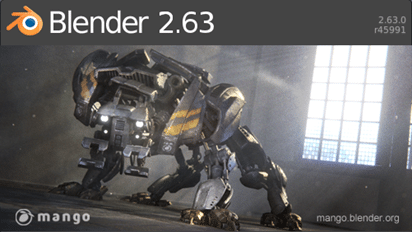 BMesh brings to the table, take a quick look at this post.  Having worked in Wings for so long, and Nendo before that, I have been dying to see ngon support added to Blender.

Expect things to be a bit buggy for a while, the switch to the BMesh engine is a pretty massive change.  That said, expect to see new and more powerful tools coming out, as in many ways BMesh impacts Blender developers as much as it does end users.

However, it isn’t only about BMesh.  Cycles has also received a lot of love in the 2.63 release, with new rendering passes for Ambient occlusion and shadows, as well as a mask layer for “masking out” objects in the scene.  Environment mapping has also been improved to support float precision textures.  A mirror ball project mode has been added as well, but frankly, I don’t really understand the use.  Additionally, there is now a panoramic camera, which will render a panoramic view of the scene around the camera’s location.  There have also been improvements to viewport rendering, allowing it to show background images as well as the ability to show the currently active rendering layer in the viewport.

There are other features as well, including the ability to hide portions of geometry while sculpting, a very handy feature.  There were some additions to the motion tracking tools, as well as over 150 bug fixes.

One of the biggest releases in a very long time and the one I’ve been most eager to receive.  Kudos to the Blender team for this excellent release.