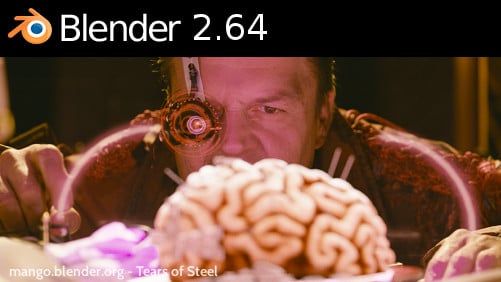 For game developers, the big release was actually the last one, this release is more focused of VFX, but there is still plenty to get excited about.  Here are details of the release in the Blender Foundation’s own words:

The focus was on creating a full VFX pipeline, with improved motion tracking using a planar tracker, easier green screen keying, and a new mask editor. A new tile based compositing system was added, along with more advanced color management. Cycles rendering got dozens of smaller features and improvements resulting from its use in production.

Sculpting now supports masks, and a skin modifier was added to quickly create a model from skeletons. The game engine got improved shadows and physics options, and Collada export now has more options to tune for exporting to other game engines.

The key changes, from a game developer’s perspective, are probably:

Bevel and inset now are modal operator with mouse control, a wire frame tool was added to turn edges into wireframe tubes, and vertex/edge/face sorting tools were improved.

The Collada exporter has been improved for better support of export to game engines, with more fine grained options to control which data is exported.

Sculpting has received some major improvements such has masking to control which areas of the mesh are influenced by sculpting, new brush map modes to control how textures are projected onto the model, and an input stroke averaging option to make brush strokes smoother.

The Skin modifier takes a skeleton made up of vertices and edges as input and generates a polygon skin as output, consisting mostly of quads aligned along the edges. The output is mostly quads, although some triangles will appear around intersections.

Of course there were also a ton of bug fixes.

You can go download the newest release right here.  Of course, expect a bit of a wait as their servers get pummelled.