Today the Blender Foundation released Blender 2.68.  It’s not a large release, epecially compared to some of the more recent ones, but it has a few modelling features I am going to absolutely love.

First and foremost is the change to the Bridge tool.  You can now bridge between edge loops with a different number of vertices!  This is one of those features I miss when moving from other 3D packages to Blender.  Here is the new bridge tool in effect:

This feature is exceedingly handy for connecting multiple models together, even if it might require some cleanup later.

The next new modelling feature is Vertex Connect, which can basically be thought of as a knife tool that operates between vertices.

It’s a small thing, but it will make doing face cuts much cleaner, resulting in at least two less vertices per cut.

Finally, you know have the option to split faces when you dissolve vertices.

I’m not entirely sure if I will use this or not.

On the modelling side, there were a number of revisions for symmetric modelling, and a new Grid Fill tool for filling two connected edge loops.  In many ways this reminds me a ton of the early 3DS Max patch modelling plugin ( … which name I have forgotten… everyone had a copy… ).

These images are from Blender.com.

If you start with this:

And apply a grid fill, you end with this: 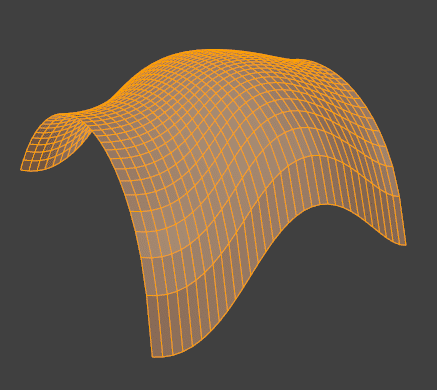 Very cool and potentially very useful, but I HATE Blenders curve tools with a passion.

On the non-modelling side of things, the Cycles renderer got a few improvements. CPU and GPU performance were improved, a mist render pass was added, hair rendering on GPU as well new nodes were added.  On the physics side, particles now respect the modifier stack and the smoke particle sample now is higher resolution.  There were improvements to motion tracking, general usability as well as 280 bug fixes!

Not an earth shattering release, but theres enough new stuff in there that certainly make your life easier.  They had me at bridge tool!

So head on over and download it now.  I offer a 100% money back guarantee!