Today the Blender Foundation announced the release of Blender 2.79.  Other than a load of bug fixes, there isn’t actually a ton in the release 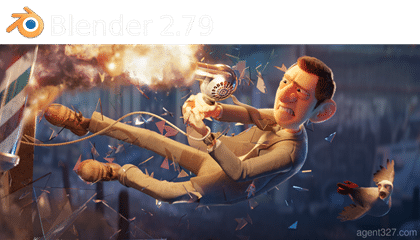 directly for game developers.  Perhaps the biggest feature is the new PBR shader node, implemented as the Principled BSDF node based on Disney’s PBR implementation in Renderman.  Other new features include Denoise is a new feature for removing rendering noise, a new Filmic view transform has been added for more photorealistic rendering results, improved OpenCL performance as well as various Cycles renderer improvements.  The Grease pencil also received several improvements in this release including per layer onion skinning and new interpolation tools.

Perhaps the single best improvement of this release to me personally is automatic DPI scaling.  This means Blender will automatically detect if you are using a high DPI monitor and adjust it’s UI accordingly.  No more having to manually change the user interface each time you plug in an external monitor!

The 2.79 release also includes a ton of new add-ons, including:

Be warned however, there was a change to the way add-ons work with data, meaning that backward .blend compatibility may be impacted!

To read more details of this release check the full release announcement available here.  If you are interested in learning Blender, we have a ton of great tutorials available here.