This topic is important enough to get its own section, although the reality is it is pretty straight forward.

When modeling, it is often advantageous to work with edge loops, which are simply stated as a set of connected edges across a surface. Generally, the first edge connects to the last edge, thus forming a “loop”. Edge loops are also another reason while modeling in quads is a good idea. A loop will continue by taking the middle choice of any four way intersection. If the intersection is not 4 ways, the loop will end. I know this sounds confusing, but I will illustrate it a bit better. 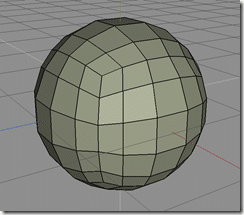 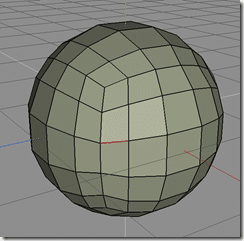 Is part of this edge loop: 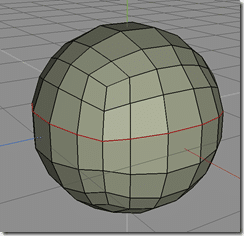 Generally in your modeling application, you will be able to select by edge loops. For example, in the above case, in Wings3D I selected the single edge, then pressed “L” and it selected the entire loop.

Consider what I said earlier about 4 way intersections. Here is a zoom-in of the above edge loop.

Notice how the edge loop continued through the middle of every intersection, like going straight at a 4 way stop sign? This is what defines an edge loop. If the intersection was not 4 way the edge loop would end. Consider a bit higher up on the same model:

See how the selected edge is at a 3 way intersection? This terminates the edge loop, so if I select the edge loop in this case I get: 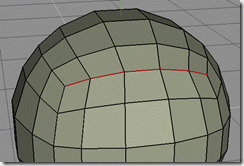 Which quite obviously is no longer a loop.

Generally speaking, modeling with proper edge loops will lead to easier and smoother animations, especially when dealing with organics, like modeling the human face.

Additionally, edge loops present you with the ability to rapidly alter the profile of the model you are working on. One very handy feature is:

You can select an edge loop then “slide” it up and down between its next two closest edge loops. It preserves the overall shape of the object as the loop is moved, becoming closer and closer in shape to the edge loop it is approaching. This is a good way to quickly alter the shape of your object.

*NOTE* Slide is not restricted strictly to edge loops, and works on any edge.

In addition to sliding existing edge loops, most 3D tools allow you to insert new ones. For example in Wing, “Crease” or “Extrude” will add new edge loops on either side of the selected edge loop. This is a good way of rapidly adding detail to a mesh, while preserving the over shape.