So today on Safari Books Online came a book that was a complete flash from my past.  Computer Graphics: Principles and Practices 3rd edition has been released.  What’s so special about this book? 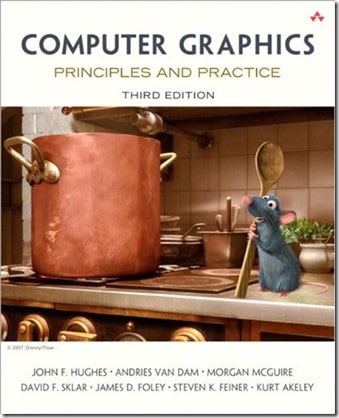 First, it was the textbook I used to learn computer graphics a very long time ago.

Second, it was one of the only ( incredibly expensive ) books I had to purchase for school that I actually found valuable.  ( Code Complete was the other book, if you were curious )

Third, it’s one of the only dead tree books I have kept.  I am almost entirely digital these days, so you have to be a good book for me to keep you around, especially given the size of a few of the condos I’ve moved into over time, I’ve gone through a lot of book purges!  When you consider how incredibly out-dated it had become, the world of graphics has changed a great deal since the second edition of the book was released in 1990!  On top of that, all of the code examples where in Pascal, using a library I’d never heard of at the time, or used since.

Fortunately with the release of the 3rd edition, I now have one less piece of dead tree fighting for space in my house!  There are a few things to know about this book, it’s has no code for OpenGL or Direct3D, it’s not really about that.  The book actually uses WPF for it’s examples, but don’t worry, the concepts are easily applied elsewhere. The entire point of this book is to teach graphics programming concepts, not really about the implementation.  If you don’t already know one of those APIs, you are going to want to pick up an additional book on your graphics library of choice ( if needed. )  That said, this will make you **understand** what you are doing with either of those graphics libraries.  You will find when reading this book, it doesn’t really matter what programming languages or library you use, you will be able to digest and adapt to your tools of choice without a lot of effort.  This book has been almost completely re-written at this point, and does cover the modern graphics pipeline.

What does it cover?  Well, just about everything actually.  That’s why I kept it around all these years.  For example, here is the Table of Contents:

… so as you may be able to tell, this isn’t a short book.  In fact it’s 1264 pages in length, which would be why this isn’t a proper review, I am not done the book.  In fact, it’s one of those book I will probably never read entirely front to back.  Instead I jump in to the areas I need, unless of course I struggle with the concepts being taught, then I tend to read the entire chapter until I’ve gotten the subject down.  Of course, I read chapters from time to time just for something to do.

That’s another great part of this book.  I am no math wiz, I have forgotten far too much, so with many pure math texts I struggle.  This is why this book is very good.  It’s not simple by any means, but it doesn’t just throw an equation at you and leave you scratching your head.  Things are introduced in escalating difficulty, but if you have a late high school or first year university math education, you should be OK.

The math is fully explained over the course of the book.  If you have trouble parsing out equations, they are explained fairly well in the book including how to decipher them.   The book doesn’t magically make math easy, but it does do an effective job of explaining it, so that even a non-genius can make sense of things.  Here for example is the excerpt on Euler Angles, and is typical of how things are explained:

Euler angles are a mechanism for creating a rotation through a sequence of three simpler rotations (called roll, pitch, and yaw). This decomposition into three simpler rotations can be done in several ways (yaw first, roll first, etc.); unfortunately, just about every possible way is used in some discipline. You’ll need to get used to the idea that there’s no single correct definition of Euler angles.

Thus, objects are first rotated by angle φ in the xy-plane, then by angle θ in the zx-plane, and then by angle ψ in the yz-plane. The number φ is called pitch, θ is called yaw, and ψ is called roll. If you imagine yourself flying in an airplane (see Figure 11.1) along the x-axis (with the y-axis pointing upward) there are three direction changes you can make: Turning left or right is called yawing,pointing up or down is called pitching, and rotating about the direction of travel is called rolling.These three are independent in the sense that you can apply any one without the others. You can, of course, also apply them in sequence. 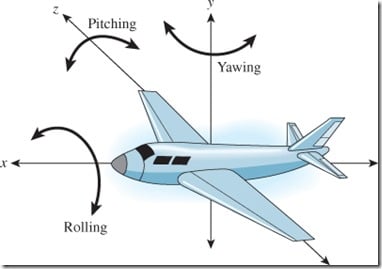 Figure 11.1: An airplane that flies along the x-axis can change direction by turning to the left or right (yawing), pointing up or down (pitching), or simply spinning about its axis (rolling).

Writing this out in matrices, we have

With the proper choice of φ, θ, and ψ, such products represent all possible rotations. To see this, we’ll show how to find φ, θ, and ψ from a rotation matrix M. In other words, having shown how to convert a (φ, θ, ψ) triple to a matrix, we’ll show how to convert a matrix M to a triple (φ′, θ′, ψ′), a triple with the property that if we convert it to a matrix, we’ll get M.

The (1, 3) entry of M, according to Equation 11.14, must be sin θ, so θ is just the arcsine of this entry; the number thus computed will have a non-negative cosine. When cos θ ≠ = 0, the (1, 1) and (1, 2) entries of M are positive multiples of cos φ and – sin φ by the same multiplier; that means φ = atan2(–m21, m11). We can similarly compute ψ from the last entries in the second and third rows. In the case where cos θ = 0, the angles φ and ψ are not unique (much as the longitude of the North Pole is not unique). But if we pick φ = 0, we can use the lower-left corner and atan2 to compute a value for ψ. The code is given in Listing 11.1, where we are assuming the existence of a 3 × 3 matrix class, Mat33, which uses zero-based indexing. The angles returned are in radians, not degrees.

Listing 11.1: Code to convert a rotation matrix to a set of Euler angles.

It remains to verify that the values of θ, φ, and ψ determined produce matrices which, when multiplied together, really do produce the given rotation matrix M, but this is a straightforward computation.

In general, you can imagine controlling the attitude of an object by specifying a rotation using θ, φ, and ψ. If you change any one of them, the rotation matrix changes a little, so you have a way of maneuvering around in SO(3). The cos θ = 0 situation is tricky, though. If θ = π/2, for instance, we find that multiple (φ, ψ) pairs give the same result; varying φ and ψ turns out to not produce independent changes in the attitude of the object. This phenomenon, in various forms, is called gimbal lock, and is one reason that Euler angles are not considered an ideal way to characterize rotations.

If you can make sense of the above, you will be good with this book.  This sample is pretty typical of how things in this book are covered.  So if you are looking for a text for learning or brushing up on computer graphics Computer Graphics: Principles and Practices is probably one of the best.  With the exception of Physics, and library specific instructions, this book has pretty much everything you might need to know.