Sculpting is all the rage in 3D these days, and for good reason.  You can quickly and fairly easily make incredibly detailed models in a very intuitive manner.  Many professional studios

have slotted a sculpting application like Autodesk Mudbox or Pixologic ZBrush in their workflows.  Only one catch… got 800$?  In the world of 3D, that’s rather affordable, but in the world of my wallet, that’s a bit more harsh!  Of course Blender, Maya, Max et al. all have sculpting features, but they simply don’t approach the abilities of a dedicated application.  Fortunately for us, there exists a free option, Sculptris. 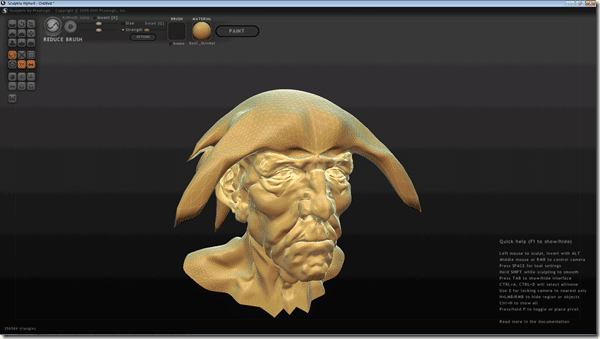 Sculptris began life as a hobby project of Tomas Pettersson, in an attempt to make a free version of ZBrush.  Thing is, he did a damned good job, so good in fact that Pixologic hired him on.  Even cooler for all of us, Pixologic made Sculptris on of their official products and continued to offer it for free!

So essentially, you can think of Sculptris as ZBrush lite, but don’t go thinking it’s a demo version or a toy, it is a remarkably capable and streamlined application.

If you have never used a 3D sculpting app before, its rather like modeling with virtual clay.  With Sculptris you start with either a flat plane or a 3d sphere, then start pushing, pulling, smoothing, creasing away until your model takes shape.  It really is a remarkably fluid way to work.  Tools are kept to a minimum, in Sculptris you model using: Crease, Rotate, Scale, Draw, Flatten, Grab, Inflate, Pinch and Smooth.  That’s it, and frankly, that’s about all you need.

Once you are done shaping your 3D model, now it’s a matter of texturing.  You click the Paint button, choose the texture size you want it to create and it goes to work for a few minutes.  Once your texture map is generated, you can now paint in 3D using the same interface. 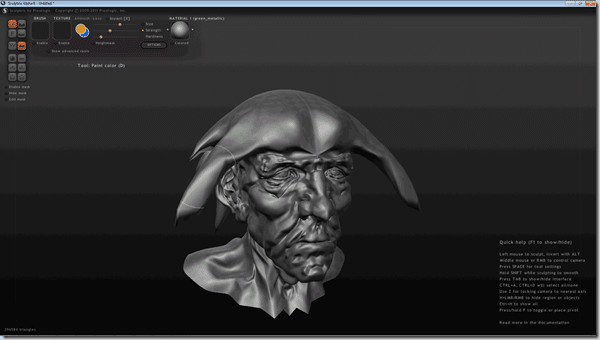 You can of course also import your own models, this is especially useful for creating displacement maps for your lower polygon work.  Sculptris supports importing OBJ ( wavefront, format, but nearly ubiquitous at this point )  as well as GoZ format ( ZBrush format ).  You can also export in the same two file formats.  Be careful though, your exported files aren’t going to be “light”.  Consider the model in the screenshot, it was imported as a 200K OBJ, and after a few minutes in Sculptris when it was exported  it was 14MB in size.