This weeks cool thing is in an area where there aren’t too many options, audio capture and manipulation tools.  On the “pro” side, the dominant player is probably Pro-Tools, which is in a word expensive.  With pricing starting at 700$ and going up from there, it is out of the reach of many peoples budget.  Truth of the matter is, it’s probably overkill for most people too.

In the mid range you have other, slightly cheaper options such as Adobe’s SoundBooth or if you are the Mac type, Apple’s Logic Pro.  Both of these apps sell for about 200$.  If you’ve noticed one thing about me though, it’s I like free stuff, I really like free stuff.

Thankfully there is a free option, and it’s pretty damned good.  This weeks CTofW is Audacity.  In addition to being a rather clever pun, it is also a “free, open source, cross-platform software for recording and editing sounds.  It is available on Windows, Linux and Mac. 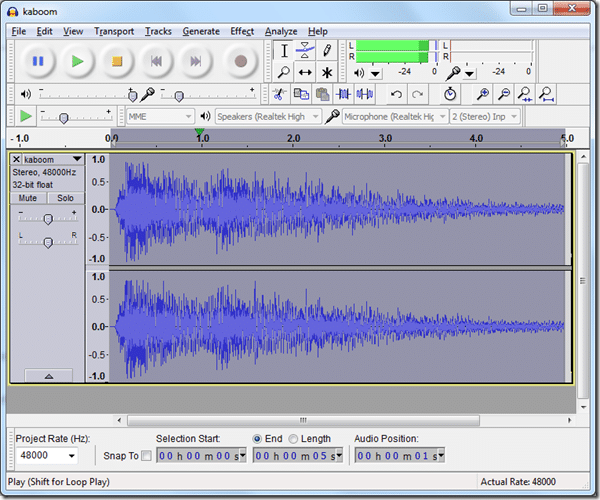 As is pretty typical of open-source projects, it’s a bit on the ugly side, although compared to it’s open-source peers, it is the belle of the ball.  However, unlike most open sourced projects, it’s incredibly well documented.  In addition to the included documentation, there are actually a few published books including Getting Started with Audacity 1.3 and The book of Audacity.  It’s a good thing too, even though Audacity is pretty simple to get started with, it’s an amazingly deep program.  The short form description for their site goes as follows:

You can use Audacity to:

Instead of going into depth here about what this program can do, I’ll refer you to their feature list.  And I promise you, that list just scratches the surface.

So, if you are looking for a audio capture and manipulation application and are doing things on a budget, you really can’t do better than Audacity.  Seeing as it’s free and only a 20MB download, what have you got to lose?

Cool Thing of the Week Tools