Got an Android device and dreamed about coding while out and about?  Until now your choices have been slim to none, but that’s changed with the release of AIDE.

What is AIDE?  It’s a complete Java toolchain, including IDE that runs on your Android device.  Frankly, it’s really really really cool.  Did I mention yet, it’s very cool?  Cause it is!

Everything you need to create an Android app is included, from a text editor with full auto-completion, full compiler, app signing.  Perhaps more impressively, it also includes a full Git implementation and the ability to load Eclipse projects from your DropBox account.

Here is AIDE in action on my Samsung Galaxy Note: 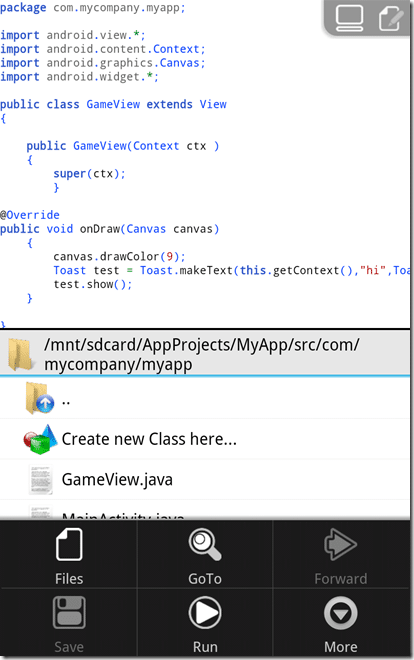 On my Transformer, with full keyboard, it is actually a remarkably desktop-like development experience, but even more shocking, developing on my phone was actually do-able.  Not something I would want to do every day, but editing code was very natural.  The zooming feature is extremely smooth.

Now ready to be really impressed?

Second, it’s just over 6MB in size!  An entire Java toolchain, including IDE in under 6 MB?  Extremely impressive.

AIDE is still currently in beta, but well worth checking out!  You do require Android 2.2 or higher.

Cool Thing of the Week Java