Here is an overview of Copperlicht’s functionality:

You may notice the strike through that Copperlicht includes a 3D world editor; this isn’t entirely true with the open sourced version.  There is a commercial editor available named CopperCube, however it is a commercial product

I have to say, I like this move.  You can create a full game using Copperlicht without the editor, while the editor is available on a 14 day trial.  This means people can contribute to a Copperlicht project without paying money, but there is a value add sell that means the developer can eat!  I hope this will result in an increase in popularity for Copperlicht that in turn increases sales for Coppercube, which would be win/win.  I personally would like to see the demo extended to 30 days, or preferably be 14 actual days, not 14 calendar days.

This announcement is quite timely, as I just recently had this conversation on Twitter: 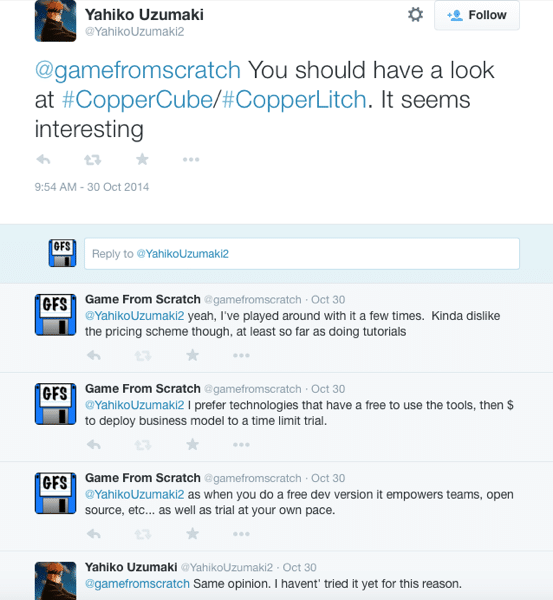 This is a slightly different business model, but one I firmly support.  On the whole I think this is a great change.  I have used Irrlicht in the past and was impressed by the engine.  Now I am going to look closer at Copperlight and possibly due a tutorial series on it in the future.  Now that Copperlicht and Coppercube are a bit less intwined, I wonder if Coppercube could move to being more agnostic and be of use to say… Three.js or Turbulenz.

Are you at all interested in hearing more about the Copperlicht engine here on GameFromScratch?