There are a number of solutions for developing iOS applications in a foreign language and creating a native binary.  For example there is RoboVM (Java), Xamarin (C#) and even Adobe Air (Flash/ActionScript).  To the best of my knowledge there are no solutions to going the other way.  How can you take your natively developer iOS Objective-C app and port it to Android?

Now there is a solution, or at least, soon there will be. Marmalade, the makers of a popular cross platform C++ game development kit, have recently announced Marmalade Juice.  This graphic probably explains it best of all. 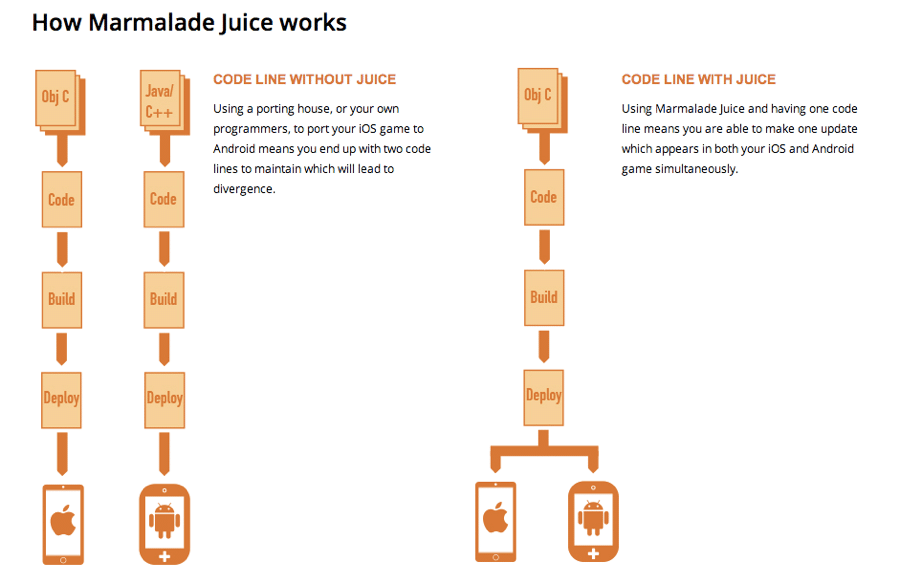 So basically its Xamarin in reverse.  Write your code in ObjectiveC/XCode, then compile to a native Android binary using a mapping layer translating underlying calls via their Marmalade middleware layer.

Now why exactly anyone would actually want to write code in ObjectiveC I still don’t know… 🙂  This however could prove to be a heck of a boon for iOS developers looking to target Android but not wanting to rewrite portions of their game in C++ or Java. If you are interested in Marmalade Juice you can learn more here.  A beta is available for existing customers with full launch in 43 days ( as of today ).