CryEngine 5.5 preview has just been released at GDC 2018.  In addition to several new features, the 5.5 release includes several new learning materials to 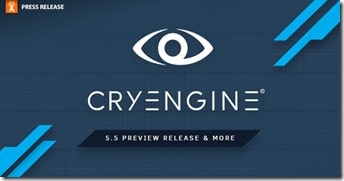 help new developers get started using CryEngine.  Another major change in this release is the availability of source code for the new CryEngine editor.  Additionally, Crytek have announced a new royalty based cost structure.

Crytek are also moving to a straight royalty based subscription model with this release:

Crytek has announced a new 5% royalty-based model for CRYENGINE, alongside a range of improvements, enhancements, new learning offerings, and full access to the editor source code. Developers around the world now have complete, uninhibited, and easy access to the power of CRYENGINE, and the opportunity to have their expertise with the engine recognized.

Creators who release games using CRYENGINE V will find development faster and easier than ever before and incur costs only after $5,000 is raised in revenue. An enterprise tier will also be introduced for custom support packages and royalty buyouts. Developers currently developing on CRYENGINE 5.0-5.4 can apply for a royalty exemption if they wish to stay on the current version and not take advantage of access to the editor source code. For more information, consult the CRYENGINE FAQ pages.