CryTek have just released several assets from the game Ryse Son of Rome.  The content pack consists of Egyptian level data from that game and includes several models, textures and a sample level showcasing the included assets. 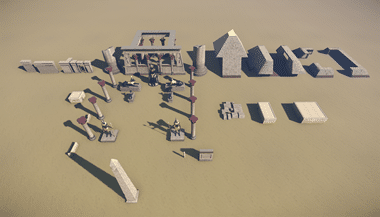 Details of the assets from the CryEngine marketplace:

The Egyptian themed assets in the pack provide large and small-scale elements for dressing your own Egyptian setting with statues and hieroglyphics set next to giant modular pyramids.

This pack was previously provided as part of the Humble CRYENGINE Bundle 2018, and we’re delighted to make them available to everyone for free now.

The assets are released under the CryEngine limited licensing agreement, which seemingly prevent you from using these assets in other game engines.

Too see the assets in action and for instructions on how to use them, be sure to check out the video below.