SDK is downloaded and installed.  For some bizarre reason, you need to sign up before downloading the SDK ( which… is freely available in source code form on Github… ).  Once you’ve signed up and signed in, head over to https://dashboard.moaicloud.com/download.php and download it.  Personally I am using the August developer snapshot, because apparently, I am crazy like that.  Once downloaded, unzip somewhere, I went with C: because I am a lazy lazy man.

So, this is genesis…

Pretty sparse over all.  The docs contain a handful of PDFs, but they appear to be seriously out dated.  MoaiProjectSetup.pdf is certainly worth the read though, it’s got the most technical details that still seem relevant.

For now, I simply care about getting a Windows host working, iOS, Mac and Android can come at a later date.  No sense adding an unnecessary layer of complexity right now.  Moai provides a sample Windows host based around GLUT, you can load the source code for Visual Studio 2010 at C:moai-sdkhostsvs2010.  It has already been compiled at C:moai-sdkbinwin32 as Moai.exe.  To make life a bit easier, I am going to add this to my PATH environment variable.  This is completely optional, but I tend to find it makes life easier.  To append MOAI to your PATH environment, from a command run:

Oddly enough, permanent environment variable changes do not apply to the current session, so you need to exit and start a new command prompt.  Now you can change into the directory of and run one of the samples.  Let’s try that now, open a command prompt and type:

If everything is configured correctly, you should see: 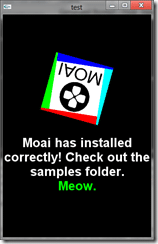 Well, that was easy enough, up and running a sample in about 10 minutes including download times.  Until we actually need to extend the functionality of the client, the default host should be good enough.  You may also noticed, there are .bat and .sh scripts in each example directory if you don’t want to bother setting the path to moai.exe.

Now to give creating a new MOAI project a shot.  Obviously Hello world seems a sensible enough place to start, in fact I believe it is the law.  Therefore we are going to create a simple application that creates a window and displays “Hello World” centered.  Create a new folder somewhere and create a file main.lua in your favorite text editor.  You need to copy a .ttf file named courier.ttf ( or rename it in the code to match ), I simply copied mine from c:windowsfonts. Now enter the following code: 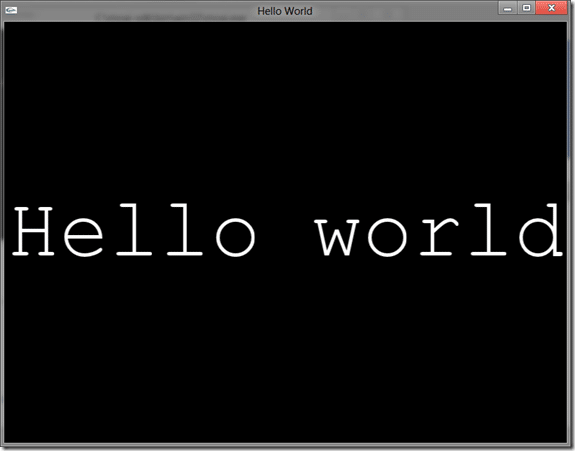 All told, a little complex for a typical Hello World application, but nothing too outrageous.  There are some oddities, like the inverted text, but as you can see, there was also a great deal of control.  Considering this is an application that will run on many platforms, all told, that wasn’t too painful of an experience, was it?

As to the SetYFlip() question, there is an answer of sorts here:

One thing to note about “setYFlip.” While all other props in Moai will automatically assume a world style coordinate, a textbox will assume a window style. To get the textbox to render with world style, you set YFlip to true.