I don’t often get excited about unreleased products, and up until this point I have never gotten all too excited about a Kickstarter project ( although I really look forward to a possible Planescape sequel! ), especially a hardware package that sounds too good to be true.  “The first truly immersive virtual reality headset for video games” is pretty ambitious.

Then I read the quotes:

When it come to video game name dropping… that’s a pretty impressive list!

Now about the device itself: 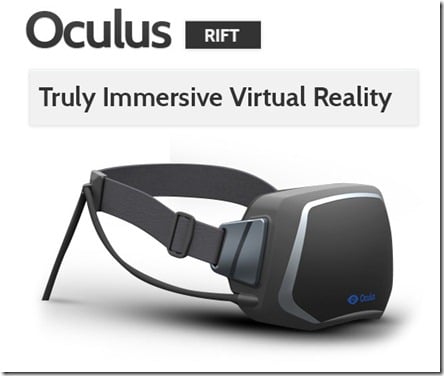 It’s called The Oculus Rift  ( ugh ) and its tentative specs are:

Perhaps most important, and the thing that got my interest, it’s coming out of the box with Unity and Unreal engine support.  That could move it from being a fringe curiosity, to being a device with an actual future.

Ultimately this all came about from their kickstarter campaign, attempting to raise 250,000$ to make developer kit’s available.  Well, that goal is WAYYYYYYY passed, and as of writing they are pushing the million dollar mark. A pledge of 275$ or more got you early access to the device and the SDK, although they are sold out, so I don’t know why I bothered mentioning that!

EARLY RIFT DEVELOPER KIT + DOOM 3 BFG: Try the Rift for yourself now! You’ll receive a developer kit, perfect for the established or indie game developer interested in working with the Rift immediately. This also includes a copy of Doom 3 BFG and full access to our Developer Center for our SDK, docs, samples, and engine integrations! (Please add $30 for international shipping)

What do you think?  Is this the future of gaming?  There were some rumours that next Xbox was going the VR route.  I also seem to recall reading Steam had something in the works too ( ironically, Michael Abrash, who was quoted, was the person I believed was leading the effort).  Personally though, it makes me sick… literally.  I have tried a couple of VR rigs in the past, and beyond a few minutes play I start getting dizzy.  Let’s hope that doesn’t hold true with the Oculus Rift. Oh, and that’s a terrible name.