The following tweet, sparked off a bit of an interesting conversation about game development, game engines, game journalism and it’s affect on end users. 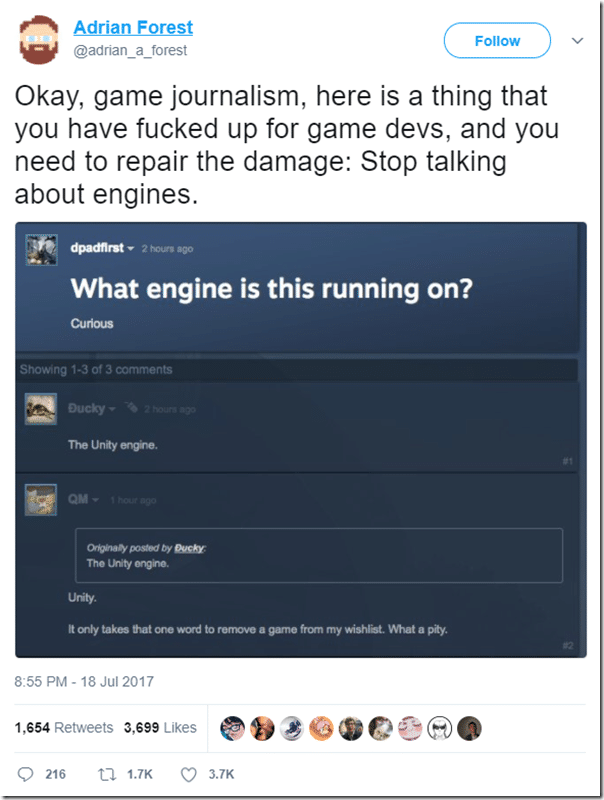 I understand the perspective Adrian takes and I agree and disagree with him all at once.

First off, the part I agree with.   The end users should not be prejudging, or in this case, outright dismissing games based of the engine they are developed in.  This is like dismissing a film because of the way it was filmed.

However, that same analogy holds true.  Think back to the beginning of the 3D movie craze around the time of Avatar and all the CRAP films that were made because of this focus on 3D.  Dismissing a film because there was a 3D version available was a dumb thing to do… but being wary of it it certainly wasn’t.

This is where I stand on the subject, from a developers perspective.  When it comes to 2D games, I think this is pretty much a moot point.  The game engine is really quite transparent on 2D titles and really it’s the art that sets the tone.  With 3D however, it’s not so simple.  3D game engines certainly put their fingerprint on the games they create and game developers should be very aware of those fingerprints.

There are two ways a game engine influences the underlying game, design and results.  Let’s quickly talk about both.

Design is when the structure of a game engine influences the structure of the underlying game.  For example Unity by default has a very level oriented work flow, while CryEngine has a very landscape/terrain focused design and both it and Unreal Engine are very 1st/3rd person oriented in their design.  In all cases this can be overcome…  Mortal Kombat is an Unreal Engine game, Cities: SkyLines was made using Unity and Star Citizen was made using CryEngine (now Lumberyard).  In every case though, this took a great deal of effort and wrangling an engine into doing what the engine didn’t want to do.  I remember a great deal of complaints among early Kickstarted CRPG games (like Wastelands 2) about the game engine negatively influencing the end game.

Where it is increasing noticeable though, its in the results (AKA graphics) and this is for a couple of different reasons.  First, when you are dealing with a 3D game, there is a great deal more computation going on behind the scenes than in a 2D title.  You have a 3D renderer, materials system, lighting system, physics system etc.  All of these things are complex and will come with defaults to make a developers life easier.  Thing is, every single time people go with the defaults, it’s a finger print left by the game engine on a game.  You will often see comments like “Unity games are ugly”, where in reality the end user is picking up on the default renderer, lighting, etc.  The other tell tale sign of a game engine is using assets from it’s collective asset store.  An asset store is a potential boon to developers, especially ones with limited resources.  On the other hand, hearing the same jingling, seeing the same model or texture, etc… will rapidly lead users to find the games feeling very “same-y”.  You would be amazed what our subconscious mind picks up, there is a reason we have Deja vu so often, and no… nothing was changed in the Matrix.

Another reason why end users might wish to be aware of what game engines a game was written in comes down to hardware.  Some engines simply run poorly on some hardware or have higher system requirements, etc.  For example, all CryEngine powered games could be customized and tweaked using the same process and could be expected to run similarly.  This is a very valid reason for consumers to be aware of what engine a game was written in.

Finally, some readers, even less technically inclined readers may in fact want a peek behind the curtain.  I certainly know I eat this kind of stuff up.

So, should journalists stop talking about what game engine a certain game is made with?  Certainly not.  Don’t focus on it, or condemn because of engine used, but discuss it?  For sure!

At the same time any gamer that’s dismissing games outright due to the engine they are created with are doing themselves and the games in question a massive disservice.  Finally, I don’t think game developers should be overly concerned which game engine they go with, so long as it fits their need.  They should however be very aware that these game engines do put their fingerprints all over their games if they aren’t careful!