We already have motion controls, audio control and of course tactile control, what about controlling a game with your emotions?  It sounds far fetched but it really isn’t, in fact it’s here today.  Just about every single modern gaming device has a front facing camera available in some form or another.  Well, Microsoft Research lab Microsoft Project Oxford just announced the release of the emotion tool which enables you to detect emotions on a persons face.

Basically you send it a picture and it returns the probability of various emotions.  For example, I sent it this image here and it returned the following results: 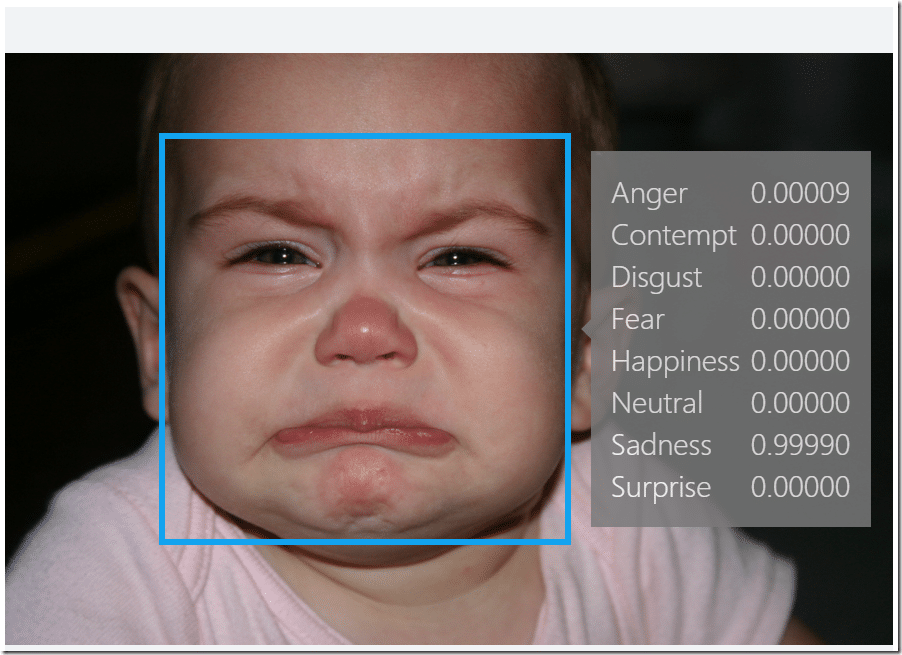 Basically you feed it an image in URL form and optionally a rectangle selecting the face, and it returns a JSON result with the probability of each emotion.  In this case Microsoft determine with 99.99% likelihood that this baby is sad, with a 0.001% chance that it’s angry instead.  I fed it a handful of pictures and it did a remarkably accurate job.

You can use it as a REST API now ( or just play with the playground ) right here.  Otherwise the SDK can be downloaded here.

So the tech is actually here already and works pretty well.  The question remains… would gamers embrace having a camera constantly scanning their emotions?  I actually can think of a few genres or tools where they might.  How many “you mad bro?” apps can we expect to flood the market now? If nothing else, it’s a fun tool to play around with on a Sunday afternoon!