It’s a pilot program for now, but Facebook has tentatively entered the world of game publishing, now that their exclusive agreement with Zygna has expired. 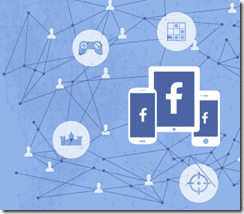 They are currently accepting applications from small and medium sized developers.

So, what does a game developer get out of this?

The first is most obvious, exposure.  The ability to get your game in front of 800M monthly mobile users is nothing to sneeze at.  Considering lack of exposure seems to be one of the biggest problems on the various app stores, this is hard to ignore.

Next is targeting.  In their words:

With our unique targeting ability and mobile users who like playing a diversity of games, we’ll help the right people discover your game.

I’ll admit, the tangible benefits of that one are  a bit harder to define.  I assume what they are saying in not so many words is, they have such a huge volume of data on their users that they are able to target with exceptional precision.  Beyond being a bit creepy, I suppose this is completely true… Facebook does know a hell of a lot about Facebookers.

We are invested in the success of these games, and in exchange for a revenue share, we will be collaborating deeply with developers in our program by helping them attract high-quality, long-term players for their games. We’ll also be sharing analytics tools and the expertise we’ve gained from helping games grow on our platform for more than six years.

The same blog post went on to mention 10 games that are participating in the program, including a game from publisher Gameloft.  Games on that list include Age of Booty:Tactics, Dawn of Dragons and Train City.

So, in a nutshell, Facebook are getting into the app promotion space and taking a cut of the profit.  Not sure exactly how that would work for sharing revenue when they don’t control the app store ( where the sale is tracked ).

If you are a small to medium sized developer and want to apply click here.  Facebook will be disclosing more information about the program later today at Casual Connect.