Things have been ultra quite on the Unity book front, perhaps the market was over saturated with books.  Today however I have added the first new book in a couple months and the first book covering Unity 4, Beginning 3D Game Development with Unity 4 by Sue Blackman.  If that author or book title sound familiar, they should, Sue already released the book Beginning 3D Game Development with Unity, the very first book on the list.

Now the catch… the book’s release date isn’t until March.   All the same, it’s nice to see some Unity 4 books starting to show up on the radar.

As of right now, I don’t have Table of Contents information to share, but the following is the book description from the publishers website.

Beginning 3D Game Development with Unity is perfect for those who would like to come to grips with programming Unity. You may be an artist who has learned 3D tools such as 3ds Max, Maya, or Cinema 4D, or you may come from 2D tools such as Photoshop and Illustrator. On the other hand, you may just 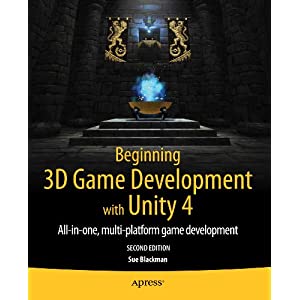 want to familiarize yourself with programming games and the latest ideas in game production.


This book introduces key game production concepts in an artist-friendly way, and rapidly teaches the basic scripting skills you’ll need with Unity. It goes on to show how you, as an independent game artist, can create casual interactive adventure games in the style of Telltale’s Tales of Monkey Island, while also giving you a firm foundation in game logic and design.

By the end of the book, you will be able to actively use the Unity 3D game engine, having learned the necessary workflows to utilize your own assets. You will also have an assortment of reusable scripts and art assets with which to build future games.

So, if you are looking for a Unity 4 book, consider checking out this one.