Sony, actually… and file this under the category of longest most unwieldy names ever, Sony Computer Entertainment Worldwide Studios Europe External Development Studio (yeah… really) in collaboration with Creative England and Birmingham Science Park have put together a contest 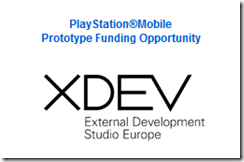 So, how then do you go about winning this money?  Well, here are the details:

What isn’t explicitly listed in those requirements, your project will be for PlayStation Mobile.

That deadline is fast approaching (less than 2 weeks!).  Keep in mind though, you are submitting a *concept* by October 31st, not a complete game.

The other line of note you should be aware of was:

In other words, if they like you game, they get first crack at being the publisher.  Given that most indie developers would love to have a publisher, this shouldn’t be a huge deal, but is certainly something you should be aware of.

If you have never heard of it before, PlayStation Mobile is cross platform game development system based around Mono.  It is C# based, built over OpenGL ES and able to target the PlayStation Vita, as well as select Android mobile devices ( most Sony Android devices, plus select devices from HTC, Asus and a few other manufacturers ).  This site has a series of tutorials you can used to get started.

You can read the original announcement thread right here.

If you are interested in proceeding, be sure to read this guide (PDF link).  It gives more details of what is involved.  From that document, here is what is recommended in your proposal:

The PDF however has no more legal issues regarding publishing or IP ownership.