It’s odd how news arrives sometimes, it always seems to arrive in batches and today’s post is no exception.  Earlier this week I read about a recently launched 3D modeller that works within Unity3D.  That piqued my interest for a few minutes, then something shiny came along and I forgot about it completely.  Then a day later a different product was announced that also enables 3D asset creation within Unity.

If you’ve not heard of it, Unity is a massively popular game creation suite, that enables developers to create games for PC, Mac, iOS, Android and more.  Prices range from free to around the 1,500$ mark.  The biggest catch has always been the content creation side, take a look at our 3D application list for an idea of the typical price tag attached to these application.  Up until now, Blender and Cheetah3D on the Mac where you only options if you didn’t have several thousand dollars to spend.  Then you have to contend with the annoyances of getting your asset from the application and in to Unity, not always a seamless process.  Therefore, a low cost/no cost editor that works within Unity is certainly welcome.  And today, we get two of them!

The first is GameDraw, which is available in Unity or as a stand alone application on Mac, Windows, Linux and iPad.  It currently has a 45$ price-tag, which is about 1% of the cost of 3D Studio Max if you want to put that in perspective.

Shade is the other contender entering the ring.  This is a bit odd for me, as I have been a hobbyist in the 3D industry since the early DOS days when I purchased 3D Studio ( note, no MAX ) 4.  I spent my childhood dreaming of owning an SGI Indy with PowerAnimator.  I have followed the industry forever, used just about every 3D application out there, from the big guys like Max and Maya to the fringe like Nichimen nWorlds and Houdini.  In all of that time 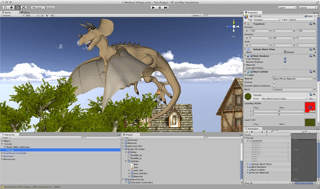 however, I don’t think I have ever even heard of Shade, which amazingly has been around since 1986 and is currently at version 12!

I downloaded the 30 day trial  and I am rather impressed with this package, which I will be looking in to in a bit more depth later.  I noticed along the way, while search for help on how to do certain tasks in Shade, nobody else has heard of it either!  There just isn’t a ton of information out there.  How the heck can a package get to version 12 and nobodies heard of it?  Easily… it’s big in Japan.  Ah.

So then, why the hell am I babbling on about Shade?  Well, this announcement recently crossed my desk:

Publisher Mirye Software and developer E Frontier announce the free 3D game content development system for indie developers and professionals will soon be available for developers on Mac OS X.Shade 3D for Unity is based on the professional 3D modeling, animation and rendering tool set Shade, a product available for over 27 years and used worldwide by illustrators and designers. Shade 3D for Unity enables designers and game developers to build animated project content that integrates with Unity 3D, the game development system for Windows, Mac OS X, iOS, and Android.Workflow integration makes it is easy to share project assets (Configuration Files) of Unity in Shade 3D for Unity and easily transfer content between them.

Perhaps most interesting of all is the price tag.  Free.  I like free.

That said, the last free product 3D product I tried out was Daz3D and I am still getting half a dozen spam emails a week from them ( serious Daz, quit it, or make your freaking unsubscribe functionality work! ), so free isn’t always free.  Mirye certainly intends to make money somehow, just not sure of exactly how as of yet.  My guess is they are following Daz’s model of selling content, or perhaps it’s an attempt to upwell you to Shade Professional.

Shade for Unity isn’t actually out yet, don’t expect it until November.  You can read more details on their site.  They also currently have a utility for using Shade with Unity on the Unity Store called the Shade Unity Loader.

Now if you will forgive me, I’m off to play with my new toy.  It’s always cool to find another professional caliber 3D application, especially one with a price tag starting at 99$!  I will post a bit more detail on my experiences with Shade 12 trial shortly.