From the release announcement:

It’s amazing that Christmas is approaching already. As you get older the time between Christmases seems to shrink alarmingly and it feels like about five minutes since last Christmas when we were deep in the middle of our Kickstarter campaign to add WinRT and desktop support for Gideros. At that time we added an additional stretch goal: to port Gideros to the Raspberry Pi. I bought my son a Raspberry Pi for a Christmas present with the secret intention of “borrowing” it to fiddle with Gideros. Well to quote from Wham! it was a case of “Last Christmas, I gave you a Pi and the very next day, I took it away” and my son has had barely a go this year as I’ve taken the Pi to my office where it sits attached to a monitor and an Ethernet cable. At home we had it connected to the TV but that is not really practical for serious programming, especially with Gideros where you need constant access to internet tools like git and apt-get. 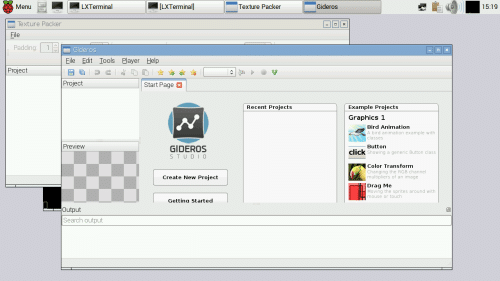 It’s important to remember what our goals were in porting Gideros to the Pi. The Pi is an educational computer designed to teach children to code, it is not a games machine. So we wanted the Pi to be a development environment allowing children to code games and apps in Lua and export them to all the supported operating systems. While it might be nice for users to, say, develop code on a PC and export as a stand alone game on the Pi (alongside Android etc) this is a secondary goal. The Pi should be thought of as a development machine like PC or Mac, not a target “device” like an iPad or Android phone.

For a good chunk of the year, I’ve been trying to port Gideros to the Pi which has proved surprisingly difficult, due to two problems. Firstly Gideros is built with a compiler system called Qt and in particular Qt5. The operating system that originally came with my (I mean “our”) Pi (pre-installed using the NOOBS system) was Raspbian Wheezy which for some reason only has access to Qt4. That is, it was only possible to install Qt4 directly from binaries via apt-get. I did attempt to compile Qt5.5 from sources but, after a 3 day compilation process (!), this did not entirely work. I did get a working Qt5 compiler, but there were a few anomalies: resulting executables had all fonts missing and did not run in a window but in a large “panel” which overlapped the entire X-Windows desktop. I now realize that the latter “bug” was actually a useful feature for reasons that will become clear in a moment. I also flirted with the option of rolling back Gideros to Qt4 (which it has previously used) but that turned out to be impractical. Yet another option of rewriting Gideros completely so it does not use Qt (I’m not a fan of Qt personally) proved even less practical…

Read more here, or check out the source code here.