If you read my recent laptop buyers guide for game developers you may have noticed that the “winner” was the P34 V4 by Gigabyte.  In this case I put my money where my mouth is and purchased one.  After spending the last couple days using it I figured I would create a bit of a review.

Here are the specs for the machine I purchased:

Please be aware that a number of different versions of this machine exist, the biggest differences being the amount of system RAM and the resolution of the display.  If purchasing off Amazon, this version is a  much better value.  The RAM and drives is easily accessible if you need to make an upgrade after the fact so don’t be overly concerned about RAM or HDD sizes.

If you are in Canada like me, and suffering from our recently pathetic dollar valuation, I highly recommend you check with Computers Canada, where I managed to purchase it for less than Amazon but in Canadian currency!  I wont go into a great deal of detail on why I purchased this particular computer as the buyers guide and price tag should make that part clear. 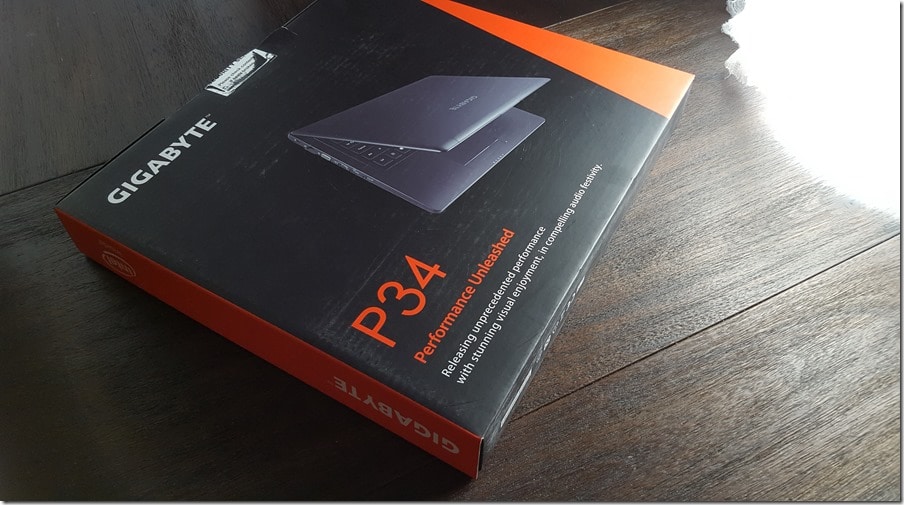 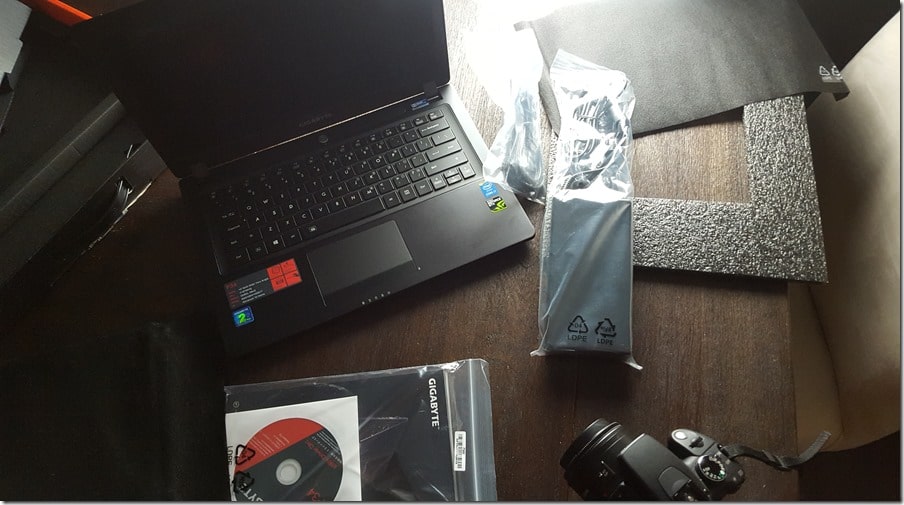 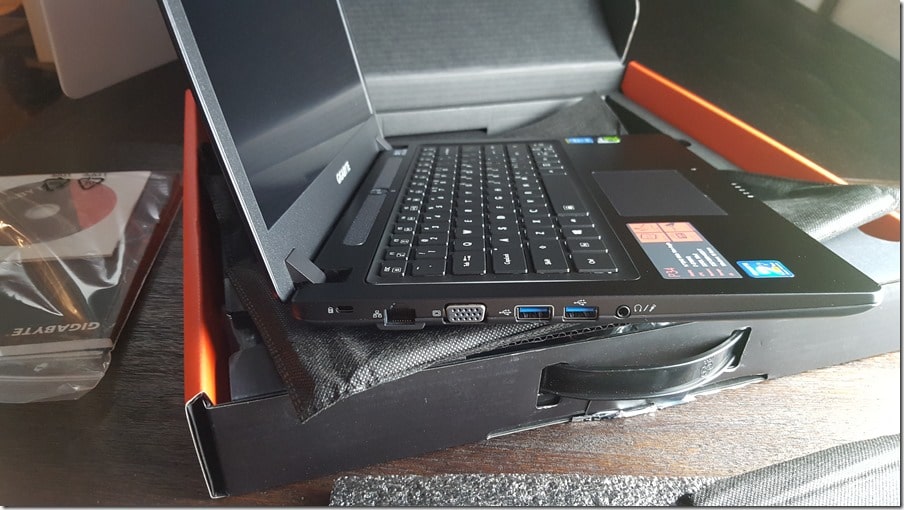 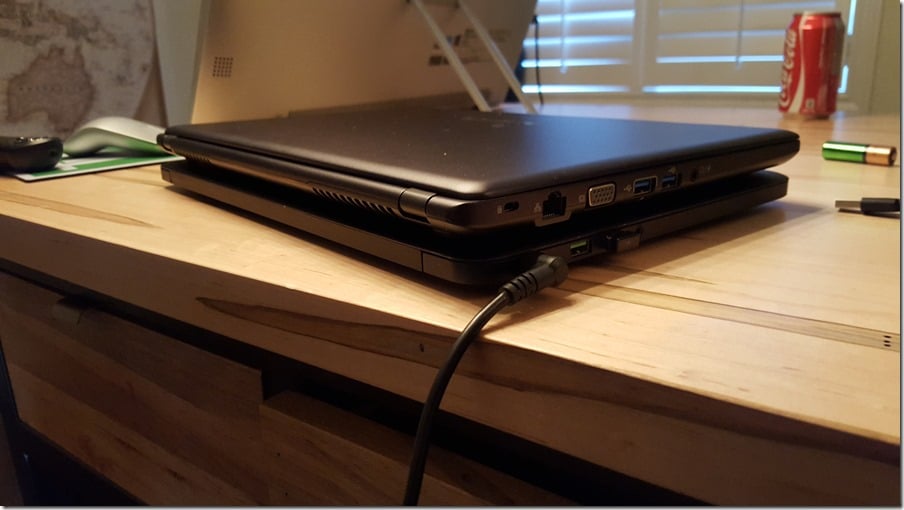 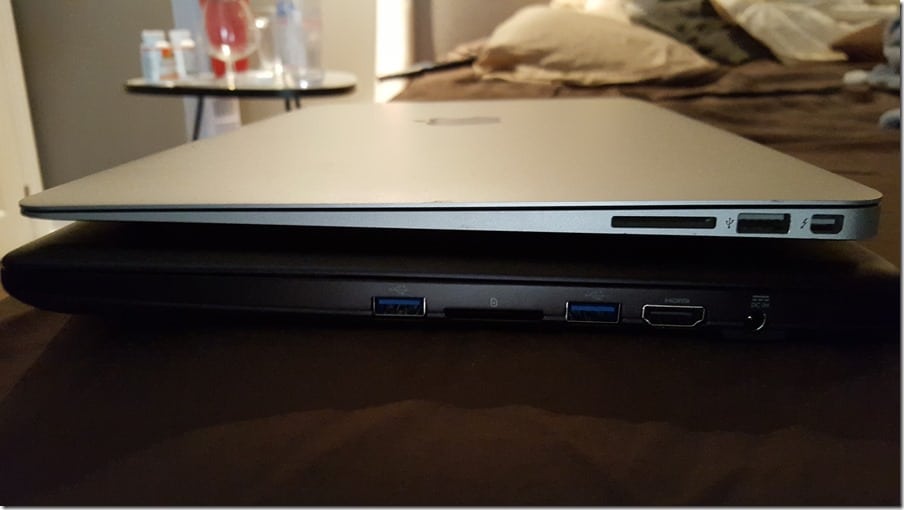 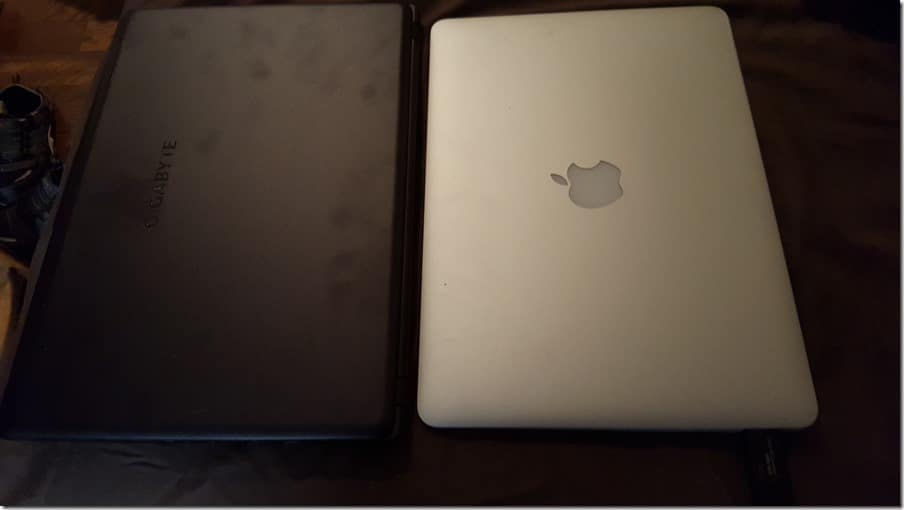 I have never purchased a Gigabyte system before so my biggest concern was build quality.  My other systems are Razer and Apple, both known for a high level of fit and finish, while I pictured Gigabyte as a more … pedestrian builder.  Fortunately I was wrong here, the Gigabyte has absolutely no faults, in fact the build quality may be slightly better than the Razer ( which had a sub-par trackpad buttons ).

The main chassis is made of aluminum and there are no obvious gaps.  The back of the screen is made of a high quality plastic, which while not looking as good as the Razer or Macbook, contributes to keeping the weight down.  Speaking of weight, this machine is amazingly light at 3.5lbs.

The keyboard and trackpad are both quite nice, although the auto sensing backlit on the keyboard seems wonky and often doesn’t come on even in complete darkness.  This fortunately can be manually set using Fn + Spacebar so it’s not a huge deal and probably is a software problem in the end.  The hinges seem solid, a point of concern with prior Gigabyte laptops.

In the end I rate the build quality as very good, a pleasant surprise.

As I don’t review machines very often I do not have the proper equipment for measure thermal or volume emissions.  I can however state my experiences.  Under no load, the machine is completely silent and cool to the touch.  When Optimus switches from integrated to dedicated GPU the fans come on immediately.  Playing a AAA game causes the fans to crank up.  They are certainly audible but not excessive.  In the end the machine is a great deal quiter under load than my Razer Blade.

Under moderate load the temperatures arent too bade.  Once playing games for loading a heavy CAD scene and it gets hot quickly.  All of the heat is centered at the back below the screen hinge and gets uncomfortable to the touch.  The machine itself does not get warm, it is being effectively cooled and you never feel the heat on the top of the machine, but you certainly don’t want the machine to be on your lap.  I would guess that a cooling bad is not a requirement with this machine.

The last time I purchased an Asus machine, it was quicker to re-install the OS than to try and deal with all the bloat pre-packaged.  The same was about the Lenova desktop I recently purchased.  This machine however… nothing.  Gigabyte installs just about ZERO extraneous software which was nice to see.   Adobe Acrobat is installed along with the manual.  A utility for creating a USB backup is included as is their control panel for quickly toggling features like the trackpad or Windows key off or on.  Otherwise the only other piece of software installed is an optional update manager. 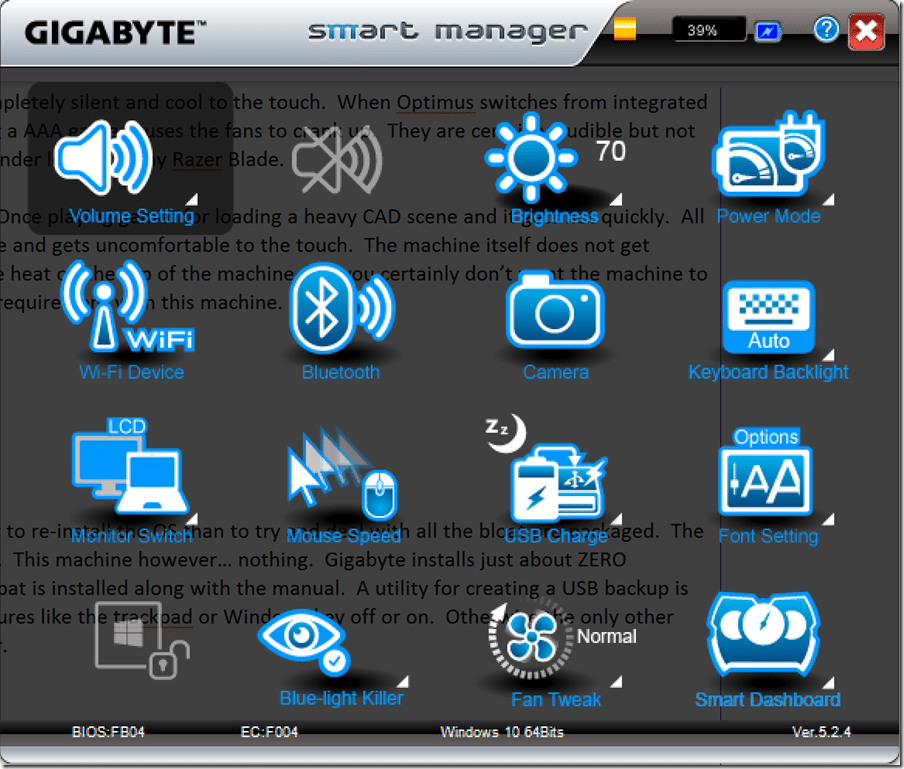 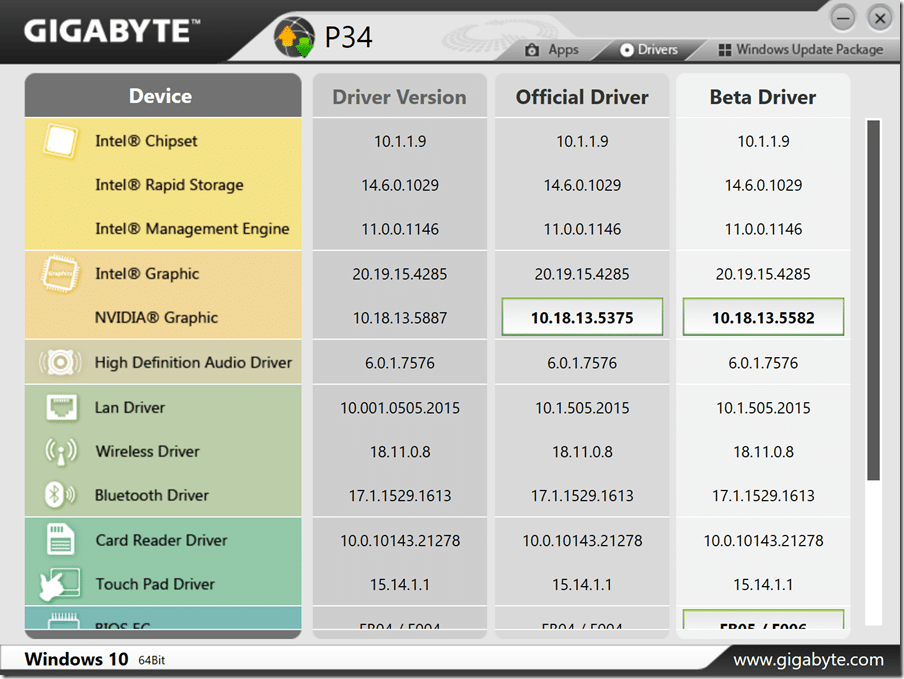 Smart update makes keeping your drivers up to date an absolute breeze and supports the ability to install beta drivers which is cool.  However it downloads EXTREMELY slow and has a non-minimizable modal window during the download process.

All told it’s nice to see a non-bloated install with the bundled software being genuinely useful.  More manufacturers can learn from Gigabyte!  I would like to see download speeds and the idiotic modal window removed from the Update manager however.

I am not going to bother with benchmarks in this review as I have no other benchmarks to compare it to.  Given the fast GPU, copious RAM and the fact it’s got the second best mobile video card available right now, it performs about as well as you would expect.  I threw a few games at it, Batman Origins, Heroes of Might and Magic 7 and Tomb Raider and was able to hit the v-sync limited 60fps at max settings on all three games.  Even running at native resolution I was able to manage playable framerates (40+) at max settings.  I did experience some oddity in Blender, but I think that’s more Blender to blame than the laptop.  I created a 3mil polygon scene and was able to sculpt with absolutely no hint of lag.  However switching to edit mode brought Blender to it’s knees.

Next we should talk about the screen.  Right now I am typing this at a café with sun glaring in my eyes with the screen at 60% brightness and I have absolute zero difficulty with glare. 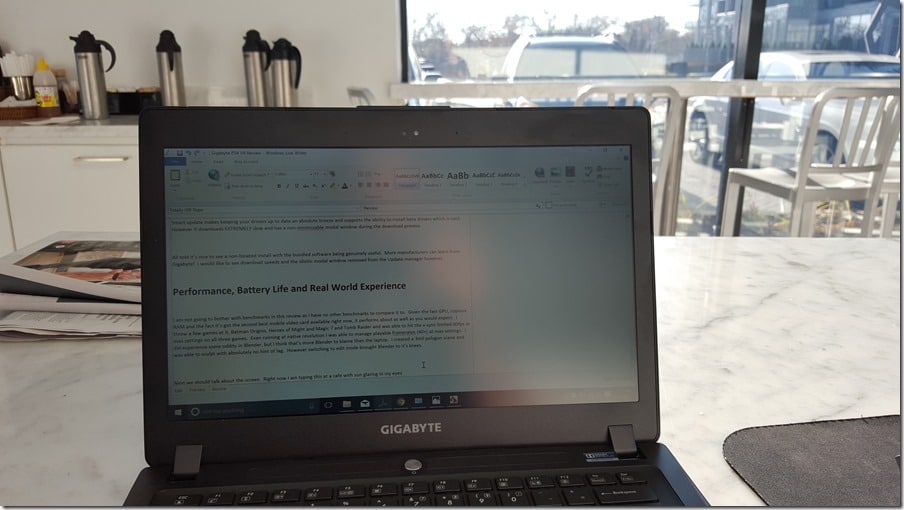 At full brightness the screen is a thing of beauty.  It is also the laptops second biggest failing.  Windows 10 has come a long way with high DPI screens but when they fail they fail hard.  Many applications are nearly unusable or extremely ugly when scaled to the higher resolution.  Worse is UIs that can’t be scaled leaving the results pretty much impossible to read.  Fortunately the 2560×1440 resolutions isn’t as extreme as 4K displays but it is still quite difficult to use many applications designed for a 1080p world.  The results look pretty good down sampled to 1080p thankfully.  If it was available I would have probably gone with a 1080p screen to save the hassle, but of course this is a matte of opinion.  Remember though, there is a 1080p option available.

Next we come to battery life and this is the Achilles heel of most “gaming” laptops, with machines that struggle to break 2 hours battery life under light load.  Thankfully this is not the case with the Gigabyte machine, in fact it is matching the Razer Blade 14 it is replacing, which is pretty amazing.  It was hard to tell exact battery life during the first couple days as Windows is downloading patches, indexing files and generally just being a bit of a pig.  Now that things seem to be settled I’m getting a pretty good gauge on battery.  Today for example I have been running on battery the last 3 hours with the wifi on, the screen at 60% brightness on balanced battery level with a little bit of 3D work thrown in the mix but mostly writing, surfing and watching a bit of YouTube, and the battery is at 31% with an indicated 1hr 25min remaining.  So 4 1/2 hours battery life under typical load.  I imagine I could stretch the battery out to about 6 hours by dimming the screen, while gaming would be lucky to hit 2 hours.  All told this is an amazing amount of battery life.

One minor (to me) problem with the Gigabyte P34w v4 laptop is it just sucks in the fingerprints.  I thought the Razer was bad, but this thing looked filthy within 5 minutes of taking it out of the box.  If you are a neat freak, this is certainly something to be aware of.  Fingerprints and this design… they aren’t friends.

In all honesty I am absolutely amazed by this laptop.  Great build quality, amazing specs, a 2 year warranty at the low end of the price range all in the 3.5lb 14” package.  It is certainly not a purchase I regret and one that I can easily recommend to anyone that favors portability and power in their laptop requirements.

It’s not completely perfect, but damned close.  The ultra high DPI screen can be EXTREMELY annoying at times, but that is by no means unique to the Gigabyte and unlike many other laptops, it at least has the guts to power that display.  Otherwise the two biggest negatives are the heat under load making it impossible to use as a literal laptop, but given the form factor and power available, this isn’t really surprising.  The other “flaw” is the slow speed of the secondary drive, a 5400RPM SATA drive is an unfortunate choice.  That said having the primary 128GB SSD drive makes this an inconvenience at worse and I rarely notice it.  The drives are easily accessible though should you wish to swap them out.

All told, this is an amazing machine.  When I purchased my Razer it was unique in the category, but as we saw there are now a number of high powered portable machines on the market now.  And with all things considered, price, size, weight, power and performance, the P34 came out a clear winner.