Today Godot just released the first downloadable version of the upcoming Godot 3.0 game engine.  This is an alpha level release, so while mostly feature complete do expect to encounter several bugs.  If you are 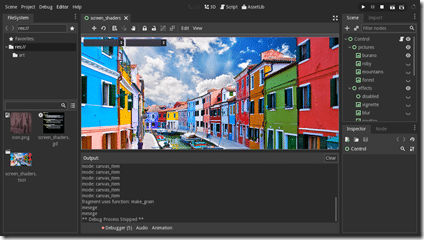 waiting for C# support, unfortunately it did  not make it into the alpha release but hopefully will be released soon.  This alpha however is absolutely packed with new functionality including the completely new 3D renderer and material system, a new visual programming language, GDNative, an updated UI and much more.

Now, there are still some cool features that can already be played with in this alpha1 build, and we are looking forward to seeing what you will come up with using the new 3D renderer. There is no exhaustive listing of all the new features to experiment with, but you can read past articles of this blog and check Juan’s Twitter feed for some teasers 🙂

Please use the community channels to discuss with existing users and learn how to use the new workflows of Godot 3.0 – as of this writing there is almost no documentation on the new features, but this alpha1 build should serve as a starting point for documentation writers.

I made a 20 minute hands-on video showcasing some of the new functionality available in Godot 3.0 available here and embedded below.