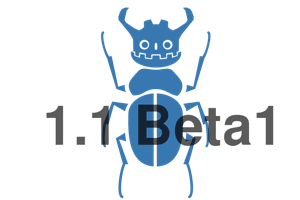 about the Godot engine, including this ongoing tutorial series, if you wish to learn more.

Well, I’ll use their own words:

Time to get serious again!

After three months of hard work, our first new release is out! This beta prepares the road for the 1.1 release, expected sometime in late April.

Please remember that this new version is BETA, so this is your time to report everything that doesn’t work to GitHub as Issues, contribute PRs with fixes or annoy Juan and Ariel to fix what is not working for you.

Godot 1.1 Beta1 can be obtained in the Downloads section, or source cloned at GitHub.