I’ve been waiting on this one for a while, Godot 2.0 has finally been released in beta form.

Never one for …  lengthy release notes, this release is not exception:

After a long, long time in development Godot 2.0 is now in beta!

Godot 2.0 Beta features a new interface , and huge amounts of usability improvements.
It is also more stable than ever, with hundreds of bug fixes and small enhacements.
Give it a test in the Downloads section!

Due to the lack of details of what is in this release (EDIT—Actually, read below, author contacted me via twitter with WIP change log), I instead leave you with a screenshot of the new 2.0 UI in action: 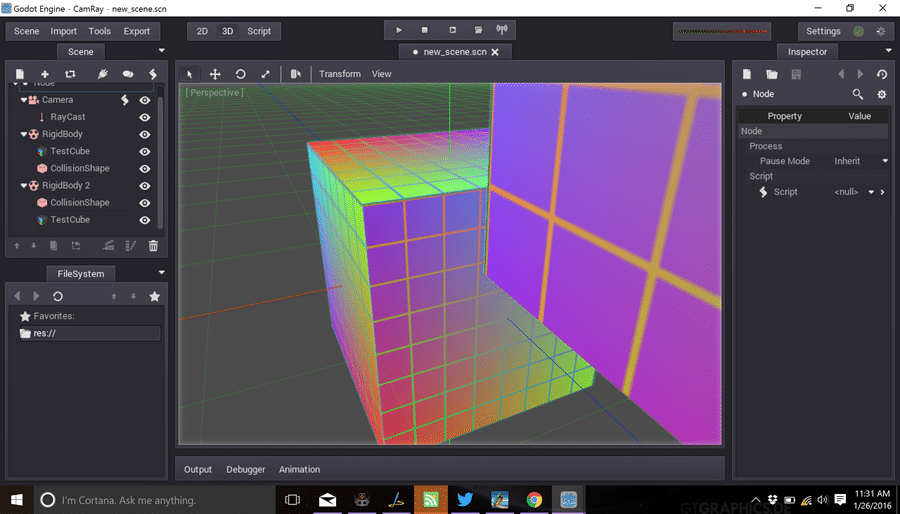 EDIT – The change log is still a work in progress, but here are it’s contents at present:

Remember to compare between the current status and 1.1-stable, we don’t need to mention changes that were done in between, like fixing regressions added after 1.1-stable.

– INI-style `.tscn` and `.tres` file formats for scenes and resources

– Scene inheritance: scenes can be based on another one and save only changes relative to the base scene

– Added ability to export current scene to a .zip file // what is this feature?

– ConfigFile.get() now has an optional “default” value to return in case the value is not found

– Option for zip-compressed resources (rather than binary pck)

– Option to export resources only

– Open several scenes at once

– Revamped script editor; recently viewed scripts appear in a red color, whereas less recent ones appear in a blue color

– Merged Script and Help tabs, help is now viewable from the Script tab

< and > not longer get swapped in .xscn/.xml format (note that this might break some logic in 1.1-stable games that relied on the buggy behaviour) (GH-2649)

(things that might be integrated in some categories above, once sorted)