Google.io is currently going on, Google’s annual developer conference.  In a world currently dominated with VR announcements, did you really expect no VR announced from Google?  Yeah, me neither.

The following is from the Android developer blog:

Android was built for today’s multi-screen world; in fact, Android powers your phone, your tablet, the watch on your wrist, it even works in your car and in your living room, all the while helping you move seamlessly between each device. As we look to what’s next, we believe your phone can be a really powerful new way to see the world and experience new content virtually, in a more immersive way; but, until this point, high quality mobile VR wasn’t possible across the Android ecosystem. That’s why we’ve worked at all levels of the Android stack in N–from how the operating system reads sensor data to how it sends pixels to the display–to make it especially built to provide high quality mobile VR experiences, with VR Mode in Android. There are a number of performance enhancements designed for developers, including single buffer rendering and access to an exclusive CPU core for VR apps. Within your apps, you can take advantage of smooth head-tracking and stereo notifications that work for VR. Most importantly, Android N provides for very low latency graphics; in fact, motion-to-photon latency on Nexus 6P running Developer Preview 3 is <20 ms, the speed necessary to establish immersion for the user to feel like they are actually in another place. We’ll be covering all of the new VR updates tomorrow at 9AM PT in the VR at Google session, livestreamed from Google I/O.

So basically they are baking much of the functionality required to support VR directly into Android N.  On top, they also released a reference device for developers and manufacturers to build their own Android N powered VR device, including this controller: 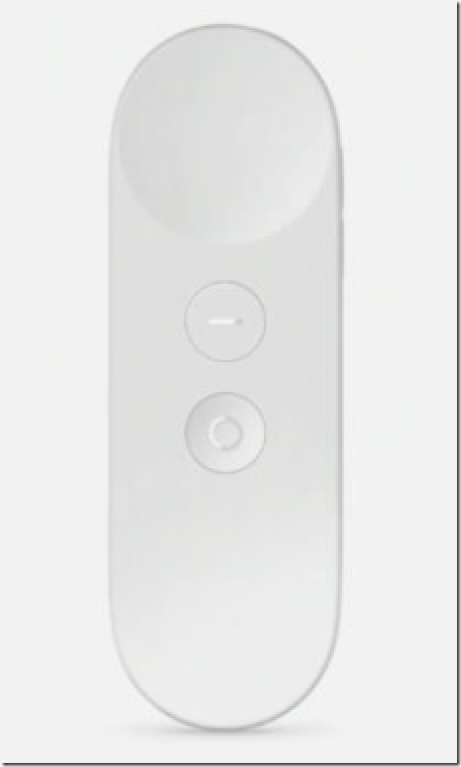 It has built-in sensors for helping to determine position along with a a trackpad for fine tuned control.

It appears that Google intends to leave device development up to others.   In an already saturated market, it will be interesting to see if this approach works.  Frankly the only real selling point I see for Android powered VR is the price point ( since the phone provides the CPU, GPU, Screen, etc ), but the GearVR is already in place and is the best selling VR Headset available.