You may recall Google Poly, a large free repository of 3D models released earlier in November.  Now Google have released a REST based API for programmatic access to the Poly database of models.  You can play around with the API using the Google API Explorer interactive tool available 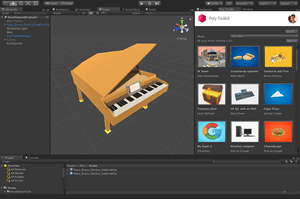 here.  You can learn more about the API here.

In addition to the REST api, they have created plugins for the following technologies:

If you’ve never heard of Google Poly, be sure to watch the following hands-on video.