The following is a guest tutorial post written by Michael Habalcik on using the freely available Moscrif game development suite to create a simple mobile game.  I hope you find it informative.

We are proud to present one of very first tutorials about “a new kid on the block”. Moscrif is the new member of cross-platform development tools suited for a modern mobile game developer.

Moscrif SDK is a development suite solving the problem of supporting an increasing number of mobile platforms. The number of these platforms is increasing making it almost impossible to go native for every one of these. With Moscrif, only one development cycle is needed allowing you to publish the game to the most popular platforms. With the current support of iOS, Android, Nook or Kindle you can reach up to 80% of the mobile market audience. New Windows Phone should be supported in the near future reaching even more mobile users.

The key advantage is the need of just one code base. Because Moscrif uses JavaScript, it is extremely easy to adopt for experienced developers as well as for beginners because JavaScript is one of the easiest languages to learn with a countless number of tutorials all over the net.

●      Code one, run anywhere – the only one code of application can run on almost 90% of devices

●      Reuse your knowledge – Moscrif uses JavaScript language which makes no problem for everybody who has ever developed web application or desktop applications in C, C++, Java etc.

The Moscrif is available for free download on its homepage http://moscrif.com/download.

To present the capabilities of Moscrif, we have created a simple game demo based on shooting down the balloons. This game contains only one level and simple game menu, but with only few additional lines of code it can be transferred into a full game ready to hit the app stores. 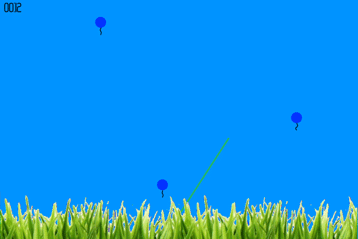 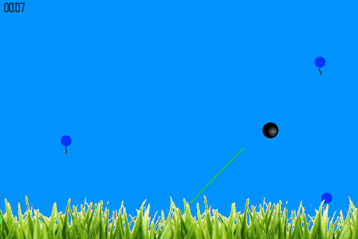 To create the project the Project wizard (click File -> New -> New project) will be used. We have selected the new 2D Game option as it is exactly what we are looking for. 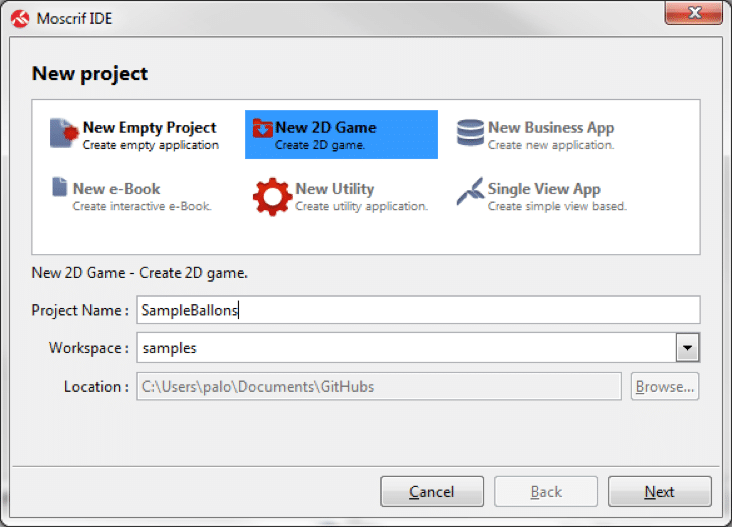 In the next step we set few of the most basic project’s properties like the landscape orientation. We have also checked the box2d library to be added into the project. As we are interested in some basic game menu as well, the option called Screens select Game with Menu is checked as well. 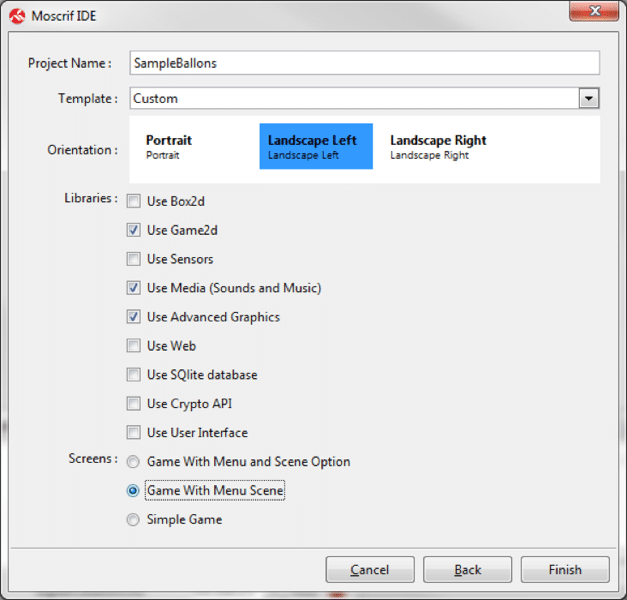 In the next step we set few of the most basic project’s properties like the landscape orientation. We have also checked the box2d library to be added into the project. As we are interested in some basic game menu as well, the option called Screens select The wizard will create a new project with three precreated scenes: menu, single and multiPlayer.

Following, a new instance of b2World object is created in the init method taking 4 parameters:

3      true/false doSleep parameter. We use True to improve the performance

We set the gravity on the y axis to -9.81 what is equivalent of real earth’s gravity.

To simulate the real world’s behavior Moscrif relies on powerful box2d physical engine. This engine is used by many platforms and many well known games rely on it like: Crayon Physics Deluxe, Limbo, Rolando, Fantastic Contraption, Incredibots, Angry Birds etc.

The main part of the physical engine is the world which consists of the bodies and the joints. It manages all aspects of the simulation and contacts between the bodies. Bodies interact together according to theirs properties which specify the density, friction and/or bounce.

The engine supports three different types of the bodies, which behaves differently. Static bodies do not move under the simulation and collide with dynamic bodies. The dynamic bodies are fully simulated and collide with all other bodies. The last, kinematic bodies do not move under the forces, only according to its velocity. They interact only with dynamic bodies. In Moscrif, bodies are created as an instance of PhysicsSprite class or class extended from the PhysicsSprite class. The position of bodies and collisions are recalculated in small time intervals.

// recalculate physics world. All objects are moved about timeStep

Balloons are managed by their own class extended from the PhysicsSprite class. Every balloon is made of several frames that are changed every 100 milliseconds creating a simple and realistic animation. When a balloon reaches the top of the screen an end event is raised.

// move to next frame

Balloons start from the random position at the bottom of the screen in time intervals.

// decrease the time between two ballons

Example: calculating the force and angle

// calculate distance on both axis

// if can not fire do nothing

// start veloity of the ball acording to angle and force

When two bodies collide together a beginContact and endContact events are raised. The events have only one parameter – a list of all contacts in the world. Every record in the list contains information about both bodies of the contact (accessible by getBodyA and getBodyB methods).

// check if a ballon was hit

// check if a ballon was hit

// check if something hit the border (only ball can)

As you can see, creating mobile games using Moscrif SDK is straightforward and even the beginners should be able to create a killer game. So are you going the make the new Angry Birds? It’s free, so why not to try it …

The source code of this sample can be found at https://github.com/moscrif/samples/tree/master/sampleBallons