The following is a guest tutorial by Avetis showing how to use LibGDX and Overlap2D to create an Angry Birds like game.  Overlap2D is a level and UI editor handy for separating game coding from content creation.  Keep in mind, Overlap2D is fairly young, currently at 0.0.4 version. Now, on with the tutorial!

In this tutorial we are going to create a FlappyBird clone game (for learning purposes only) using Java, LibGDX framework and accelerate it all by moving our UI, Level, and Asset management into Overlap2D Editor. One thing I figured while coding is that you can’t make a quick tutorial about a flappy bird clone, ever. It’s going to be long if we want details. It is easier though to use the explain approach instead of step by step guide.  So I am going to share all the sources and resources, and then go with you through setting this all up, show how things work, and hopefully this all will make sense.


First let’s download the assets. I made a small pack of images I found on the internet with Flappy Bird images, animations and font. You can get it here: http://overlap2d.com/?p=236

Setting up Your Overlap2D Project

First things first, you are currently viewing demo project, so go to File and Create New Project. Call it OverlappyBird and then create the scene size, let it be 480 width, 800 in height. It’s a standard small mobile device resolution, and since Flappy Bird is a portrait game, it should be just right. Click Create Project.
You have now created an empty project and it’s ready for setup, now you need to import the assets. Here we have 3 types of assets, first is just image textures, and second is a sprite animation for bird itself, and lastly the TTF font for score label. I have separated them in folders so you can import easily. Click on File, import to library.

First click on “…” button near the import images text field to select your images; locate them, select all. When done click on import and they all will get imported to your assets area on the right middle panel. Then open same the dialog again, and this time find Import Sprite Animations (note: not spine, but sprite) Click on “…” button there and locate bird.atlas file. Click Import, and it will get added to your assets list as well.

Your project setup is ready.

First let’s see how main scene looks in Overlap2D when it is finished: 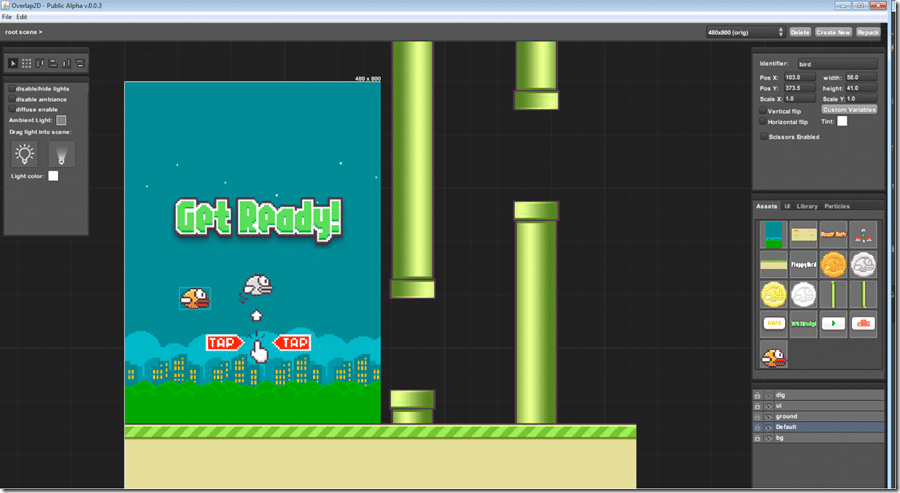 I decided to make several layers to have things organized, bg layer for background image that is not moving, default layer for pipes and bird itself, ground layer for moving the ground that is covering pipes, ui layer for “get ready” popups and score labels, and finally dlg layer for end game dialog. The reason I am not putting dialog inside ui layer is that I can position it in its layer correctly, and later hide that layer so it will not intervene with my work.  So, go ahead and create this layers in the order I described from bottom to top. (bg layer goes below them all, and you can rearrange them by drag-and-dropping)

I also recommend you to open my example project (provided with resources). Open it with Overlap2D and see how things are positioned and grouped. (To open a project, click file, open, and then locate .pit file inside project.)

Compose your own project like I did,. Put background on bg layer, and add bird on default layer. Make sure it looks like the picture above.

The ground is going to be a moving part, so we need to have 2 of this near each other for seamless movement. Put two grounds near each other and then group them into composites, like on this picture, do not forget to give identifier to it for later use.

For the pipes we are going to do the following trick. First of all we are going to put pipes on top of each other with a gap, and convert them into composite, and then add to library to have kind of a prefab for a pipe column. Later in code we are going to pre-load 3 of this because there is never more than 3 columns of pipes visible on screen, so we can re-use the ones that are left of the screen for next pipe iteration. 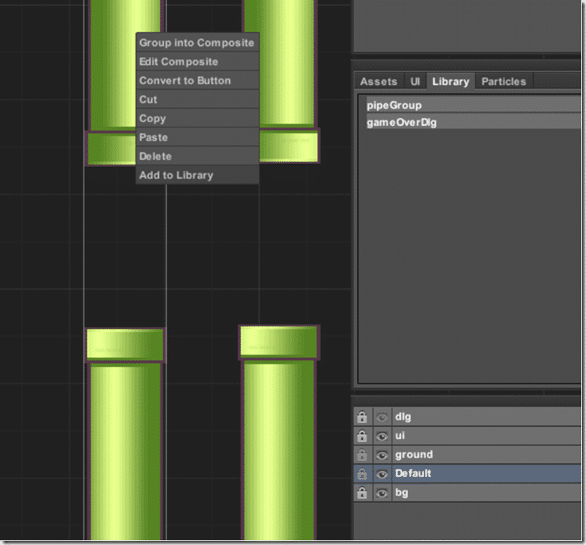 Now some of the pipes are going to vary in position on Y axis. So there are a minimum and maximum values that it should not be below or above. To avoid having this values in code, I just put 2 of pipe columns on screen: one at the lowest point and the other at the highest, and give them identifiers in order to read those values from code later. 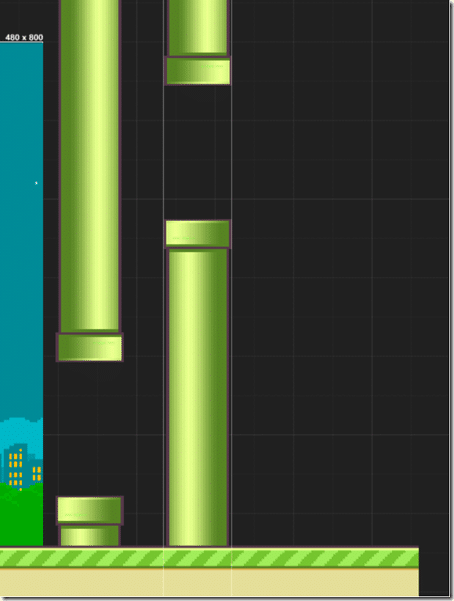 Next click on bird in properties box and add 2 custom variables, by clicking on custom variables button. First is jump_speed=400, and second is gravity=1000 (so you can later tweak game from editor not from code) 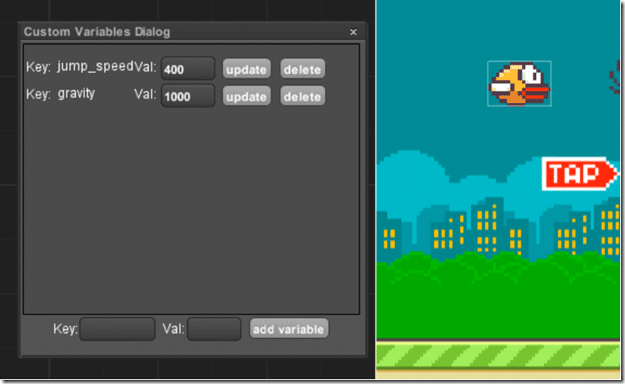 Next up, put a “hint” and “get ready” assets convert them into composite as they always go together and give them id to hide show from game. They should go to ui layer.

This one is easier: click on File, Scenes, Create New Scene, and choose MenuScene as name.

Make sure to put up all things just like on this picture. And note that you should make a composite for ground agai n (as we do not yet share prefabs between the scenes).

Put a Play button as image and give it an id to add listeners later in your code.

Here is how it should look: 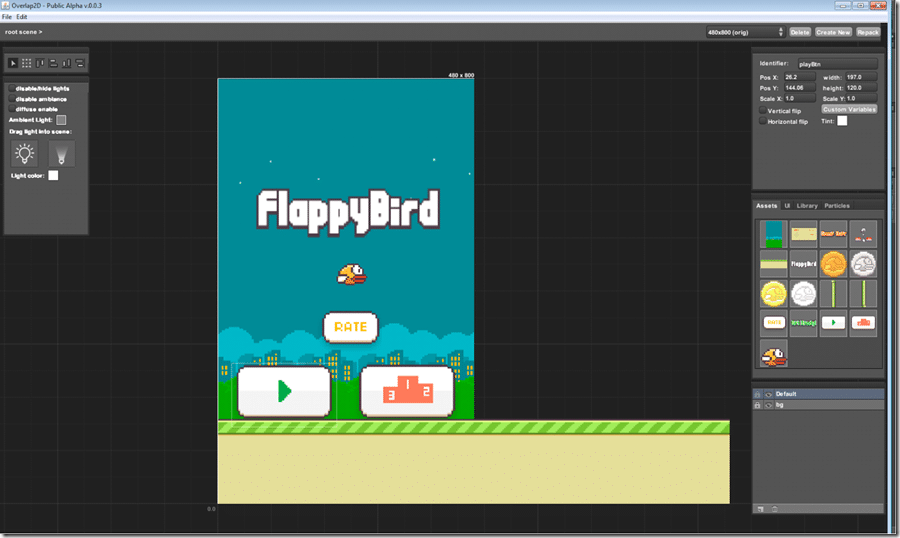 
Looks pretty good! Both scenes are set up and ready for some coding. Most importantly your scene and UI are very flexible and code-independent.

Setting up LibGDX Project and Getting Ready to Code:

Download the LibGDX setup application and setup an empty project (make sure to have checked box2d and freetype fonts), import it to your eclipse or other IDE, run the desktop app to make sure it works, then strip it from LibGDX picture  and make it just a black screen.

Make sure your desktop launcher has code to specify screen size of 480×800 (config variables in launcher).

We are going to render everything using a simple LibGDX Stage, so the code structure will be the following: GameStage extending Stage that will load all the Overlap2D data and display it; Main class that will be rendering GameStage in its render method.

For all the rest we are going to use iScript functionality of Overlap2D. Let me go a bit in depth for that. Overlap2D runtime provides an interface that you can implement to create a “brain” of any composite item. Basically it is your way of attaching logic to an object. In this example we are going to create 3 iScripts, one is going to get attached to entire mainScreen and be a GameScreenScript with all game logic, other will be MenuScreenScript for menu, and the last one will be BirdScript that we will attach to the bird. It is important to mention that you cannot attach script to an image, or sprite animation, so I have converted bird animation to composite item in order to do it (right click, convert into composite).

You can find the full project on my github:  https://github.com/azakhary/OverlappyBird

Here are the well commented sources: