Today we are going to take a quick look at the Tilengine 2D game engine.  Tilengine in their own words is: 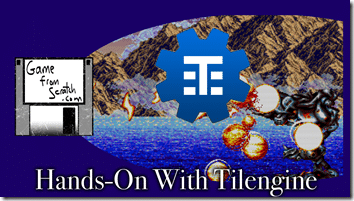 Tilengine is open source (sorry, the core isn’t open ), available on Github however I never could locate what license it’s released under.

EDIT—Since posted, there has been a bit of conversation about the licensing since this was posted, read here.

It’s a C library, but contains bindings for Python, C# and Java.  I’m actually going to use the C# bindings for the example in this review as it’s the least documented of the available bindings.  There is a single page class reference available here and a small manual available here.  The engine is geared towards creating retro sprite style games and handles graphics, animations, palettes, input and window management, but has no sound or physics engine built in.  It is also designed to be used as a backend solution to an existing front end renderer.  There are several C based examples available here, and this represents the primary way you will get up to speed.  The graphics system is designed to emulate classic sprite systems like Sega’s SuperScaler arcade board but with Super Nintendo’s Mode 7 style graphics effects available.  Tilengine is layered over SDL and is cross platform, capable of running on most desktop operating systems, as well as Raspberry Pi devices. 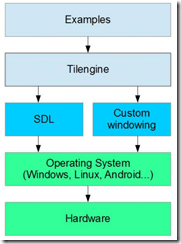 Tilengine has direct support for tiled map files created using the Tiled map editor.  If you want to learn more about Tiled, I have done a complete tutorial series available here.

As a pretty straight forward game engine, let’s jump right in with the example created using the C# bindings:

The comments pretty much describe everything that is going on there.  For more details, be sure to check the video version of this tutorial available here [coming soon].  This example loads a sprite and animation from the game Shadow of the Beast, an Amiga platformer classic.  The SequencePack file format is extremely simple XML file, here is the example used:

The tsx and tmx files are generated using the Tiled level editor, another open source and free tool.  As you can see, it’s extremely simple to get up and going.  Run this code you will see:

This is of course a primitive example, but does show the many parts of a game.  A game loop, sprite loading, animations, level loading, etc.  The major features of the engine, that I’m not covering here, are the various sprite effects it emulates.  You can see these effects demonstrated here or in the samples.