This is a kinda cool opportunity, this weeks Humble Indie Bundle actually includes the source code to many of the games included. 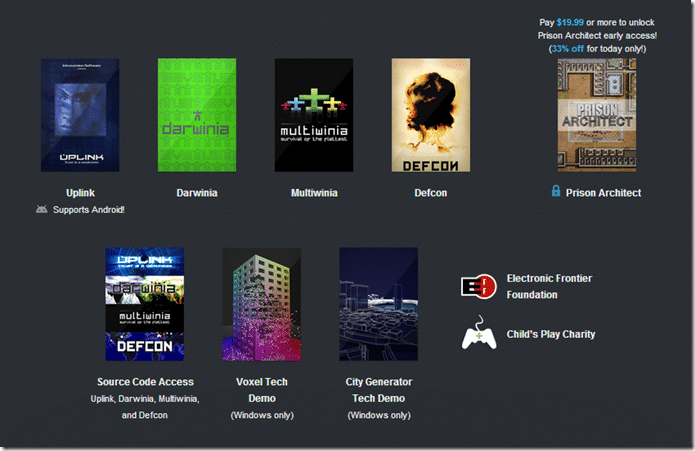 Four games plus tons of extra content. The Humble Weekly Sale features a new deal every Thursday. Be sure to jump on this amazing offer before it’s gone! This week, pay what you want for Uplink, Darwinia, Multiwinia: Survival of the Flattest, DEFCON, Voxel Tech Demo, City Generator Tech Demo, and source code access to Uplink, Darwinia, Multiwinia: Survival of the Flattest, and DEFCON. Plus you’ll receive a never-before-heard story of Introversion from the studio’s founders Mark and Chris. If you pay $19.99 or more in the first 24 hours of this weekly sale, you’ll also receive early access to Prison Architect and the full game upon its release, DRM-free and on Steam for Windows, Mac, and Linux! After the first 24 hours, you can still get Prison Architect with a purchase of $24.99 or more!

Pay what you want. Pay anything you want to receive four amazing games, two tech demos, and source code access. Pay $1 or more to receive Steam keys. Pay $19.99 or more within the first 24 hours of this sale and $24.99 afterwards to get Prison Architect!

Support vital charities. Choose how your purchase is divided: between Introversion Software, the Child’s Play Charity, or the Electronic Frontier Foundation. And, if you like this weekly sale, a tip to Humble Bundle would be greatly appreciated!

From what I can tell, at least for Uplink, the source code is written in C++.  Introversion previously offered the Uplink Developer CD.  What however is absent is the license it is being released under.  Be careful there, I am always hesitant accessing source code to a license that isn’t strongly defined.  Don’t want to end up on the wrong end of a nasty lawsuit because your game is similar to one of these titles and you peeked at the source.  I’m sorta surprised the license isn’t part of the release information.

I actually believe I own all of these games many times over as it is.  Until I hear terms of the code license, I’m staying away.

Thanks to @DarkCisum on Twitter, I have links to the licenses released that prior code releases used, it’s a fairly safe assumption the licensing remains the same.

Wearing my IANL ( I am not a lawyer ) hat, I don’t see anything too scary, but also find the license a bit too vague for my personal comfort.