In a past life in which I sat in a cubicle and someone actually gave me a pay check every week I was a huge fan of Xamarin products.  They do very a good job of enabling .NET developers to leverage their skill across many platforms.  In fact, they are the technology that Unity is built on top off.  That said, I became increasingly less of a fan when the checks stopped and expenses came out of my own pocket!

There are many people out there that view making money from software as somehow evil.  I am certainly not one of those people.  In that corporate environment, where developers are paid salaries, rent is paid for office space, taxes are paid, etc…  the price of a software tool like Xamarin is trivial to justify.  In the world of indie game development though, this is often simply not the case.

Thing is, Xamarin has become a necessary evil for so many C# based game engines ( MonoGame, WaveEngine, Duality, Paradox, etc ) if you want to port to iOS or Android.  Many of these developers will never see a dime from their efforts, while a select few will become massively rich and a certain middle ground will eek out a living doing what they love.  It’s the later two groups that keep companies like Unity and Unreal afloat, and those two groups don’t come into being without the former group.

Today, in response to Xamarin’s recent acquisition of RoboVM, I ended up in this Twitter conversation with Nat Friedman, CEO of Xamarin:

First, in regard to the acquisition of RoboVM and how long the free for LibGDX developers offer will be extended: 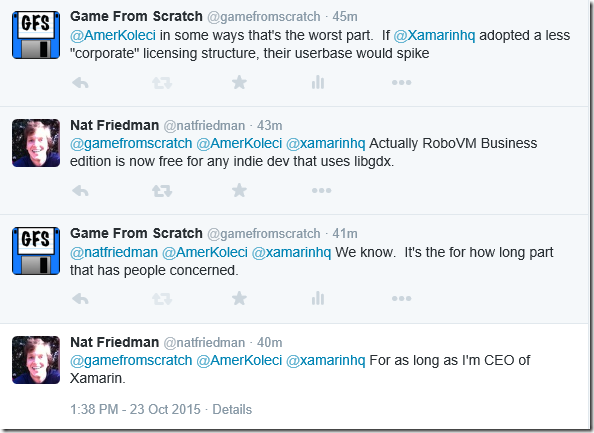 Then more on the indie friendly nature of Xamarin, or lack thereof: 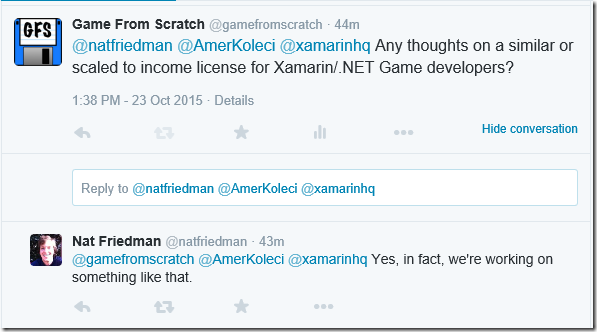 This is news I am certain many C# game developers and tool providers are going to be delighted to hear.  Hopefully something happens fairly soon, as I’ve been waiting about 6 years and counting at this point! 😉