When I started Flexamail ages ago, I created a Twitter account and did all the social media promotional stuff you were supposed to do.  Early on, we caught some pretty positive press ( LifeHacker, MakeUseOf ) and it lead to a huge amount of exposure.  Then the Twitter-verse started promoting it.  At one point, I had a Twitter

user with over 4 million followers tweeted a link to Flexamail and it was retweeted an amazing 4,000 times!  I was expecting the traffic to come rolling in!

To put it mildly, I was disappointed with the results.  A totally of perhaps 45 million people received a tweet with a link to my site… how many link clicks?  About 3000.  Of those 3000, it resulted in about 200 account sign ups.  For some perspective the LifeHacker link resulted in tens of thousands of clicks and I would estimate 4 – 5K sign ups.  At this point in time I decided the Twitter was a bunch of people talking and very few people listening.

Therefore a couple years ago when I started GameFromScratch  I pretty much ignored Twitter completely until about a year ago and what an idiot I was.  It’s all a matter of targeting I suppose.  Now if someone posts a link to GameFromScratch on Twitter, from my very unscientific observation, I would say about 20% of a persons followers follow the link on average.  So for example, if someone with a thousand follower posts a link, it results in about 200 visits, which is pretty darned good.  A stranger phenomenon, the person with less followers tends to have a much higher click through.  So if someone has around 100 followers, you would often see almost half click a given link.

According to Google Analytics, a random sampling of social traffic breaks down like: 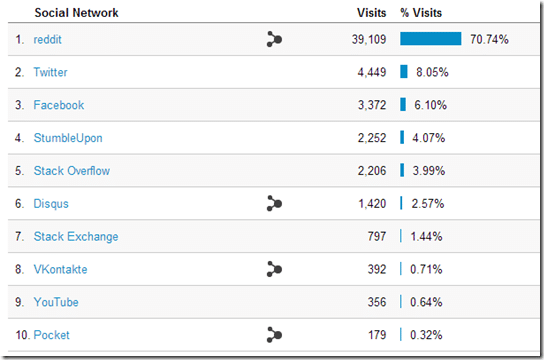 Obviously Reddit tops the list.  Reddit is a wonderful place to post for a content site like GameFromScratch, but I really don’t recommend it for plugging a product, there is a sincere distaste towards those kinds of posts.  That is unless of course you share genuinely useful information, then you are loved.  Postmortems and sharing sales data are always welcome and could be a huge traffic boost.  Or of course you could consider a promoted reddit post, something I intend to explore at some point.

Next in traffic though is Twitter, followed by Facebook and the oh so random StumbleUpon ( about a year ago got 18,000 visits from SU in a single day! ).  So Twitter is certainly worth considering.

Which got me to wondering, when I looked over at the side of Twitter earlier day, there was a link for, well, basically paying for Twitter followers from Twitter ( not those shady buy-a-thousand-followers-for-5$ services ).  I got curious, could this be an effective way to promote a game ( or in my case, book )?  So I took a look.

The form itself is clever.  You say what regions and genders you want to target, what type of followers you would like to target ( pick someone famous, or use your own followers as the example ).  Then you can select a Tweet from your history that can be promoted.  You also decide whether you would like to pay per new follower, or pay per action ( retweet, favoriting, etc ).  It all sounded pretty good… great in fact.

Then it came down to pricing.  You can set a maximum budget and a daily budget.  I went with 20$ and 20$, so basically I was saying I am willing to pay a total of 20$.  The fact it let me go in with so low of an amount is certainly good for those of us on a smaller budget.  Next up came the bid… this is where you say how much you are willing to bid for your account to be promoted.  This works just like banner ads, basically you say “I am wiling to pay X amount to show my Twitter profile” when someone matching your target demographic views Twitter.  If you are the high bid, you are shown, if you aren’t, you aren’t ( and it costs you nothing ).  Then it all falls apart! 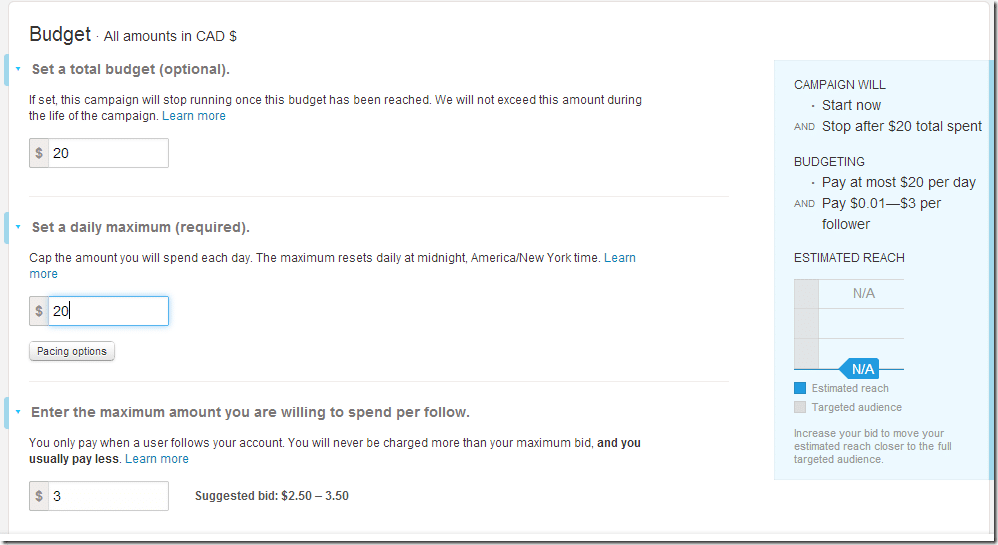 Ouch.  Maybe for large companies with huge budgeting, this is worthwhile.  In fact, it is probably cheap compared to other forms of advertising.  For example, if Coke was running a Twitter campaign, 3$ a follower is probably dirt cheap compared to say… a SuperBowl spot.  But for a small developer hoping to promote a game, good god no!

I am mildly curious to see what happens if you do a 1 cent bid, Twitter’s suggestions be damned!  At 3 bucks a follower though, is it worthwhile?  No, not really.