MaxPlay is a cloud based game engine I’ve been following since it was announced.  Formed by a number of industry veterans and well funded, it had a great deal of potential.  Back in August it seemed one step closer to reality as closed beta began.  Sadly news today from PocketGamer.biz does not look good.

Cloud-based game engine start-up MaxPlay appears to be the latest company in the competitive space to close its doors.

Former Gameplay Engineer Andrew Carroll wrote on Twitter that the studio had closed and that he was leaving the company.

MaxPlay’s website shows just under 50 staff had been working for the firm. 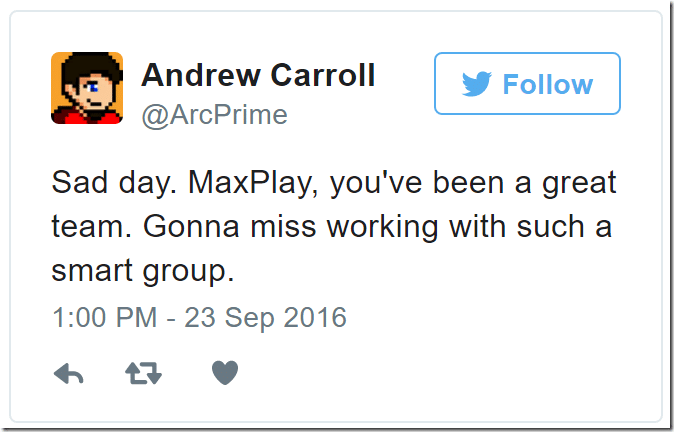 Austin studio and Call of Duty: Modern Warfare Remastered co-developer Certain Affinity later tweeted that it was hiring and called on staff affected by the MaxPlay closure to get in touch.

A number of staff, including Chief Platform Officer Michael Rothrock, have also updated their LinkedIn profiles to state they finished working at the company as of September 2016.

The game engine space is certainly a competitive one with two major players in the commercial space as well as dozens of excellent, free and often open source engines available.  In the last month we witnessed the death of the long running Marmalade game engine, as well as a major restructuring at Corona.  Always disappointing however, and I hope those that are effected find work quickly.  This was a game engine I was looking forward to getting my hands on, something that seems increasingly unlikely.