Way back in October of 2012 I mentioned the Platino 2D game engine.  It runs in Appcelerator Titanium a cross platform JavaScript based mobile development system.  Platino appears to have it’s roots in QuickTiGame2D, and open source 2D Titanium game engine.  Anyways, after several months in closed beta Platino is finally available to the public and it’s grown into an entire family of products. 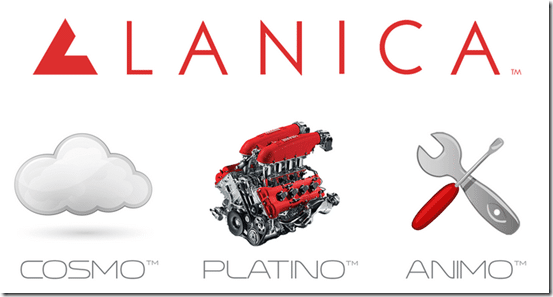 Excerpts from the launch press release:

Over the past several months, we’ve been fine-tuning our Lanica product line and giving some of you early access to new goodies as we roll them out.  During that warm-up phase, we focused mainly on big studios to ensure that Lanica could handle the most heavyweight demands of mobile gaming and interactive development before we let it loose to the masses.

What does that mean?  Well, most importantly, we’ve rolled out lower prices for indie devs, non-profits, and educational institutions to access Lanica.  You’ll no longer have to break the bank to have the power of our entire game-making platform in your hands.  Now, no matter what the scale of your operation, any developer can make use of all the big guns that we offer.

If you’re new around these parts, we should probably explain why we’ve decided to release Lanica as a three-pronged platform for making games:

You see, we realize that most developers out there already have their own processes in place, and it’s unfeasible for them to just drop everything and pick up a whole new platform every year.  That’s why we’ve built the Lanica Game Platform as a multi-tiered but separable platform, so developers can incorporate Lanica into their workflow at any scale — whether it’s just one tool or the entire platform.  We didn’t want Lanica to be an ‘all or nothing’ deal, that simply would not have been fair.  Instead, you can mix and match specific pieces of the Lanica Game Platform to fit your own development needs.

For instance:  Let’s say you absolutely love your current code editor, but are in dire need of a better sprite animator — Animo Sprites will have you covered!  Want better particle effects, but can’t part with your current framework?  You can use Animo Particles!  Need to step up to a completely new game engine? Then Platino (a.k.a. the JavaScript juggernaut) is your baby!

We don’t want to leave anyone out in the cold, so be sure to check out our entire product line and see what could work for you.

I was in on the closed beta and will say, working in Titanium is a breeze and the SDK is quite nice.  I never really got much into using the other tools other than to play around with the particle tool.  What I’ve been waiting on most was pricing and today we’ve finally got it: 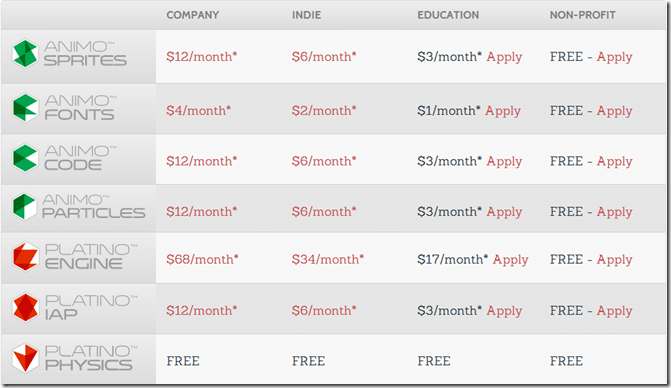 Note the * beside all of the prices?  That’s because you don’t actually purchase monthly, it’s a bit of marketing slight of hand.  So basically the Platino Engine is 816$ a year for companies, or 408$ a year for indies.  Add another 144/72$ if you want to add in app purchase support.  To be honest, those prices are a great deal higher than I was expecting, especially given the amount of competition there is out there.  I am especially shocked there isn’t a complete package price point.

That said, if you are using Titanium and want a game engine, Platino is the only game in town and it’s a good game indeed.  Just not a cheap one, at least compared to it’s peers.