It started with GameMaker, now it seems more and more game development packages are being added to Steam, generally at vastly discounted prices.  Today we see Leadwerks Game Engine: Indie Edition has been added for $99.  On the website, Leadwerks is $199.  The question is, what is the limitiation of “indie edition”?  That’s the million dollar question.  It’s not a distribution thing, as they say in the Steam entry:

Your games you make are yours. Yours to play, yours to sell, yours to give away, and do as you please. You will never be charged royalties for any game you make in Leadwerks. 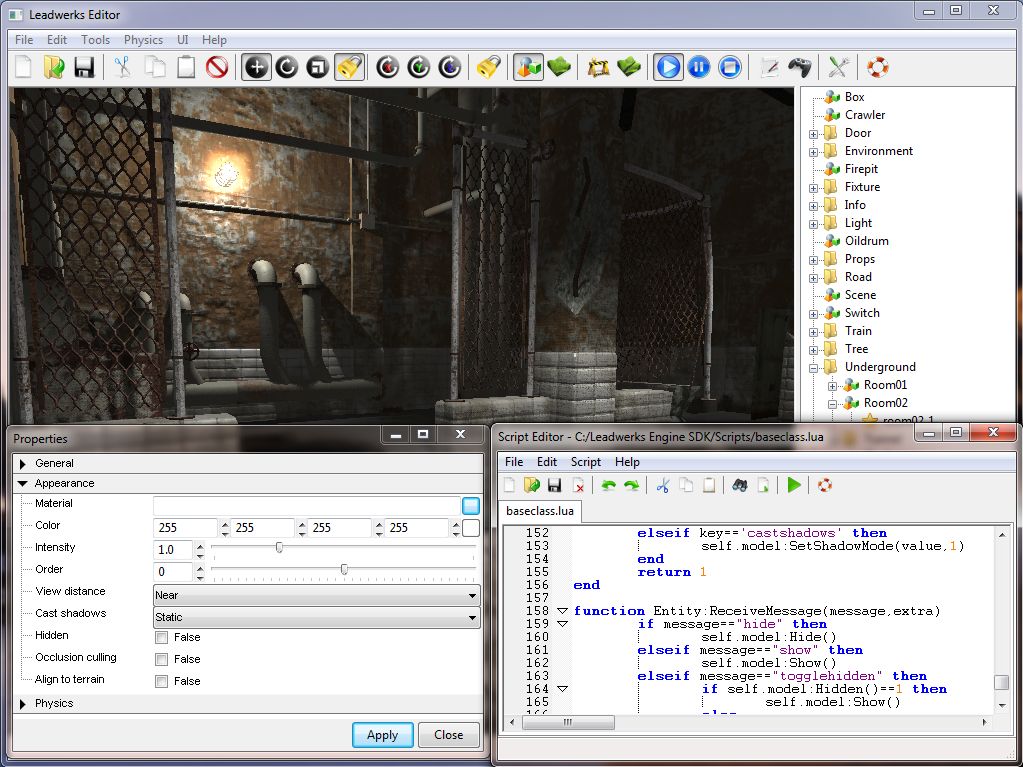 Leadwerks is a powerful and easy-to-use game engine for building any kind of 3D game. With a rapid development pipeline, Lua script integration, and plenty of learning materials, Leadwerks is the perfect way to make 3D games that look and feel amazing. Get started today making your own 3D games for Steam.

Learn to Make Your Own 3D Games
We provide tons of documentation and video tutorials walking you through the steps to build your own 3D games. Leadwerks is the perfect pathway to go from total noob to pro game developer.

Advanced Graphics
Leadwerks brings AAA graphics to the masses, with hardware tessellation, geometry shaders, and a deferred renderer with up to 32x MSAA. Our renderer redefines realtime with image quality more like a cg render than real-time games of the past. The use of OpenGL 4.0 provides equivalent graphics to DirectX 11, with cross-platform support across operating systems, for future expansion.

Built-in Level Design Tools
Build game levels from scratch right in our editor with constructive solid geometry. Our tools make it easy to sketch out your design and bring your ideas to life. Anyone can build their own game worlds in Leadwerks, without having to be an expert artist.

Integrated Lua Script Editor
We integrated Lua right into Leadwerks because of its proven track records in hundreds of commercial games including Crysis, World of Warcraft, and Garry’s Mod. Lua integrates seamlessly with native code for rapid prototyping and instant control. The built-in debugger lets you pause your game, step through code, and inspect every variable in the program in real-time. Lua is perfect for beginners, and the integrated Just-In-Time (JIT) compiler ensures your games will keep running fast as they grow.

edit:  Found this post, with a bit more details on the limitations of Steam, sorta…

"Leadwerks: Indie Edition" will be launched on Steam January 6th.  This will be on Windows only, with support for Lua scripting.  The following groups will receive a free Steam key to add this product to their Steam account:

Still not completely sure what that means in terms of limitations… does that mean the Indie edition is Lua only and targets only WIndows?  Or just that the Windows version is available?

The standard edition is more expensive but includes C++ programming capability. That’s important to some people, and for others it’s not a big deal. Since we use a just-in-time compiler to make Lua execution fast, Lua alone is perfectly capable of making full games.

So, indie edition has no C++ support…  that’s a bit of a big difference to many people I should imagine.