Amazon have just released beta 1.7 of their Lumberyard game engine.  Lumberyard is a fork of the CryEngine game engine, we took a quick hands-on look shortly after Lumberyard was released.  Lumberyard 1.7 beta brings a number of fixes and improvements to the engine, in fact it brings “more than 403 of them”…  which I have to admit is somewhat strange wording on Amazon’s behalf.   One major new addition is the new Asset Browser:

With the new Lumberyard Asset Browser Preview in 1.7, you can now see all of your available assets (including source folders and files in editor, gem, and project folders) in a familiar view in the Editor, and use those assets in your scenes by drag and dropping. Having the ability to access source assets in just one step from the Editor dramatically speeds up iteration, especially when your project uses complex source assets that can produce multiple outputs (e.g. a single .fbx file that contains both meshes and materials). Also, the new Asset Browser automatically updates itself as assets are changed, removed, or added, using the Lumberyard Asset Processor.  The Asset Browser’s underlying APIs are exposed to the Lumberyard bus system, so if you are writing your own plugin or controls, you have access to rich information about the assets, for example file size, name, location, what source produced the asset, and what other assets were produced at the same time.

Another major aspect of this release is improvements to the UI:

What you see above [to the right]is the first phase of our Editor UX improvements. We’ve interviewed many game developers, both internal and external, and have begun reorganizing and streamlining the main editor interface based around the new Component Entity system and the feedback we’ve received from our customers. Previously, to create a game object you had to select between 12 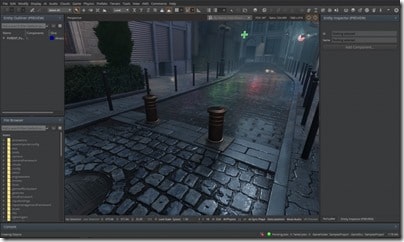 different object types, and then navigate multiple layers of the Rollup Bar to customize them. Now there is one type of game entity, which you can create with a simple right click. Editing an entity’s components, selecting files to be used on that entity, and toggling between all of your level’s entities all happens in the main window. You can also create nested prefabs of entities (“slices”) just as easily – just right click on the main window.

Next on our UX team’s list is to streamline the toolbar and top menu, while still giving you the ability to deeply customize your layout based on your role or preferences. We’re collecting more data and feedback from customers – if you have ideas, we want to hear about them. Please let us know on our forums, where you can see a preview of where we are heading next.

Android developers will now have the ability to deploy directly from the editor, no more need to drop to a command line to deploy your application.  They also shipped a new multiplayer focused example (Geometry Wars clone) using their new Component Entity workflow and their networking layer GridMate.   Other improvements in this release include:

You can read the full details of this release in the release notes or in the announcement blog post.