Just saw this pop up on Reddit and I thought I would share.  Yesterday a new engine was released, Loom.  (Nothing to do with the excellent game from LucasArts). 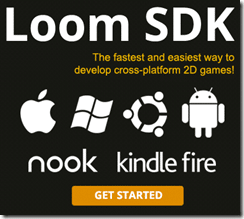 Loom works on Mac and Windows and can target Mac, Windows, iOS and Android.

Loom is a new game engine 2D game engine, written in C++ and powered by their own custom scripting language, which is a mix between C# and ActionScript.  Looking at the code samples, this engine is obviously built over top of the Cocos2D game engine, which is one of those love it or hate it APIs.  Built around a command line interface, you can rapidly create and debug projects.  Additionally it includes a gameplay framework, UI library, Tweening library, Chipmunk physics, unit testing and more.

Licensees get the complete C++ source code and right now, licenses are free.  Eventually indie licenses will be 500$, and going up from there, so if you are interested, be sure to snatch up a license now.  You can read full details about the licensing here.

There are a good number of demos available with source code.  They also offer paid support, which is always handy.

You can learn more about the Loom engine at TheEngine.co.  Clever name that… Sign up for a free license here.