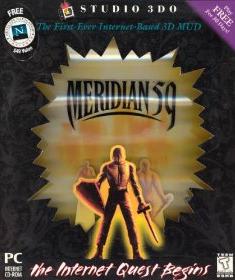 I just read on Reddit  that Meridian 59 has been open sourced and hosted on Github.  I took a quick look at the code and it was written in straight C and appears to be quite clean and easy to read, at least, as readable as Win32 C code can be!

If you have never heard of Meridian59, it was one of the first MMORPG’s that was published by the now defunct 3D0 Company.  In fact, it was the first commercial 3D MMO released.  The company that developed it went under, then another company went took over and later went under as well.  However they have managed to keep the servers running in a non-commercial capacity and people are still playing to this very day.  Always awesome to see people release commercial source code, even slightly older code.  There aren’t too many MMO’s open sourced.

Getting it to build might be a bit of a trick though.  Parts haven’t been open sourced, specifically the compression library and audio library, although I believe they are provided in binary form.

Perhaps the biggest gotcha is going to be building the room editor, which requires Borland 4.5!!! to build.  Ironically I think I have a copy on disk somewhere, as Borland C++ was the compiler of choice when I was in University.  The remaining code compiles with Visual Studio 2008.

So, if you ever wanted to peek behind the curtain on a commercial MMO, here’s your chance!