I have been following the Loom Engine since it was first publicly released.  I even did a five part guided tour of Loom Engine functionality, so this is one that I’ve been keeping an eye on.  One of the major aspects of Loom was it was layered over top of Cocos2D-x, for better or worse. 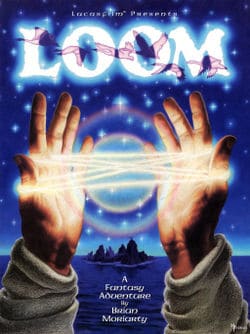 (Sadly, not that Loom)

In this release, that has has changed.

The Loom Engine saw a huge amount of work this sprint. You will notice substantial gains in performance and stability.

We shifted to the new bgfx-based renderer this sprint, improving Loom2D performance substantially and setting the stage to support DirectX and other graphics APIs. Cocos2DX is now unsupported.

We have extended Loom2D with some new features and filled in some missing features: * You can specify z-sorting mode to have C++ sort large numbers of sprites for you. This is demonstrated in IsoVille.* center() method on DisplayObject to set the pivot point to the center of the DO.* Keyboard input now works.* Touch handling is much better.* TMX loading/rendering works (now implemented in LS).* loom2d.animation package is ported.* Text rendering/text input works!* Hierarchical alpha works.

All package names are lower case now. If you run a sprint27 project under sprint28 you will see a lot of errors due to this; we recommend doing a replace-in-files to replace all your import Loom2D.Display. with import loom2d.display. and so on – this will get you up and running within minutes. Don’t do it by hand unless you like menial labor! 🙂

Feathers is now a standard Loom library and available to use in your projects!

The profiler works, and also reports a lot of object allocation statistics. Use profilerEnable and profilerDump in the Loom console to start it and have it report results.

Porting Feathers (50,000 lines of AS3 code) drove major improvements to LoomScript. Wins include:* is/as/instanceof now are compliant with AS3/JS standards.* Allow {foo: "bar"} style Dictionary literals.* Added NaN and isNaN, and some useful constants on System.Number.* Convenience for porting: try/catch/finally parse, but the catch/finally blocks are never run. throw triggers a Debug.assert. Vararg type specification is now allowed (but does nothing). new <String>[] syntax is now supported for initializing Vectors.* Array is now an alias for Vector.<Object>.* Fixed crashes related to printing too-long strings with trace().* Vector.push() is now much more efficient for pushing a single item.* You may reference properties via super, ie, super.x.* trim/split work properly now, and are much faster.* Added Number.fromString.* Added a Base64 utility class.* ByteArray gains uncompress and the position property.* Stage gains a method to dump the DisplayObject hierarchy; it also has a bunch of nice new methods for dealing with scaling/native size.

Loom CLI’s loom new template was updated to use the new Loom2D APIs as well as package naming convention. Also the default Curse Font color was changed to Blue, as the white font tended to disappear on the default background.

You can add –verbose to any CLI command to get more log output.

CLI now explains why it asking for your system password to update on OSX.

So, Cocos2D is out and a custom C++ renderer is in.  Additionally they added support for the feathers UI library as well as TMX loading/rendering.  There are other changes as well as numerous bug fixes, mentioned in the release post.  Loom is no longer completely free, although they offer a free option and quite reasonable pricing.  Of course, if you signed up when I first linked it, it’s still free for you.